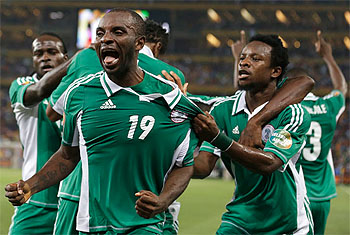 This comes as another club has joined Warri Wolves and Enugu Rangers in laying claims to Sunday Mba. According to AllAfrica.com, Dolphins FC of Port Harcourt have claimed that Sunday Mba is their player.

The Nigeria Premier League (NPL) had ordered that the Super Eagles duo of Sunday Mba and goalkeeper Chigozie Agbim belong to Warri Wolves and the football body wrote a letter to that effect, which was signed by the Executive Secretary of the NPL, Tunji Babalola, and circulated to media houses by the management of Warri Wolves, where it was stated clearly that the players belong to Wolves and not Rangers.

Babalola, on behalf of the NPL in a letter dated February 13, 2013, addressed to Warri Wolves and copied to the Nigeria Football Federation (NFF) General Secretary and Rangers International FC, it said: “We are in receipt of your correspondence on the above subject. From our records, it is established that Chigozie Agbim and Sunday Mba are bonafide players of Warri Wolves FC.

“Consequently, the ownership of the players is not subject to controversy and any club that requires their services should contact the management of Warri Wolves for negotiation,” the letter stated.

But explaining his own side of the story, Mba claimed that he had been contracted to Enugu Rangers by Warri Wolves, a statement the management of Warri Wolves frowned at.