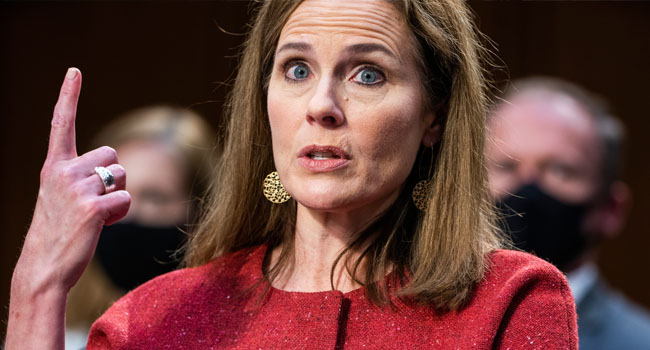 Despite trailing in the polls barely one week from election day, US President Donald Trump on Monday will likely celebrate a monumental victory for the conservative cause: his third nominee confirmed onto the US Supreme Court.

Appellate Judge Amy Coney Barrett is all but certain to become the ninth justice on the nation’s highest court, after Democrats failed to derail the contentious process in a sharply divided Senate.

In a rare Sunday session, the Senate’s Republican majority overcame a filibuster by Democrats, and Barrett’s nomination cleared a procedural hurdle, 51-48, to set up a confirmation vote Monday evening.

“The other side won’t be able to do much about this for a long time to come.”

Barrett’s ascension to the seat left vacant by the September 18 death of liberal icon Ruth Bader Ginsburg would essentially lock in a 6-to-3 conservative majority on the high court.

They have been left steaming over the process. Senate Republicans blocked Barack Obama’s Supreme Court pick in March 2016, arguing it was too close to an election still eight months away.

But when Trump nominated Barrett 38 days before the 2020 election, Republicans embraced the move.

Top Senate Democrat Chuck Schumer on Sunday called the confirmation rush a “glaring hypocrisy” that would leave “an in-erasable stain on this Republican majority.”

Two other Trump nominees, Neil Gorsuch in 2017 and Brett Kavanaugh in 2018, are already on the court after bitter partisan fights.

The president’s first term has been controversial, but his Supreme Court confirmations are “at the top of the heap” of accomplishments, Republican Senator Marsha Blackburn told Fox News.

The current process has moved with uncommon speed, taking just 30 days from Barrett’s nomination to her likely confirmation — less than half the 69.6 day average from nomination to final Senate vote, according to a 2018 congressional report.

Trump, who trails his Democratic challenger Joe Biden, has said he wants the Barrett confirmed before the November 3 election and in place in the event the court hears an election-related challenge.

Two Republican senators, Susan Collins of Maine and Alaska’s Lisa Murkowski, voted against moving forward after saying in recent weeks that they opposed confirming a justice so close to an election.

But in a turnabout Saturday, Murkowski told colleagues she would vote to confirm Barrett given that there was no chance of blocking the process.

“While I oppose the process that has led us to this point, I do not hold it against her as an individual” and will vote for her confirmation, Murkowski added.

McConnell prioritized the confirmation over all other Senate business, including a new bill to provide relief to millions of Americans and companies ravaged by coronavirus.

The pandemic has brought a new wrinkle to the process.

Vice President Mike Pence, who also has a constitutional role as president of the Senate, is expected to preside over Monday’s vote, even though his chief of staff — and reportedly others in Pence’s circle — was diagnosed with Covid-19 this weekend.

The staffer entered quarantine, but a spokesman said Pence, who has tested negative for the virus according to a spokesman on Sunday, will maintain his current schedule.

That drew astonishment from Schumer, who warned Sunday that Pence’s decision puts senators and staffers at risk.

“The Republican Party is willing to ignore the pandemic to rush this Supreme Court nomination forward,” he said.

US President Donald Trump is set to unveil his Supreme Court nominee on Saturday, barely five weeks out from the November 3 presidential election, with US media reporting that he has chosen conservative judge Amy Coney Barrett for the job.

If the 48-year-old law professor is indeed nominated and confirmed, her appointment would consolidate a conservative majority in the country’s top court.

“We are going to be announcing somebody great,” the US president said in Virginia on a whirlwind three-state campaign tour Friday.

“Tomorrow [Saturday] I think is going to be a big day!” he added, as the crowd roared with approval.

The president did not name his nominee but earlier said his decision was made. Barrett was “outstanding,” he said.

Media reports noted the mercurial Trump could still change his mind before the official announcement, expected at 5 pm (2100 GMT) Saturday.

Democratic opponents, led by presidential candidate Joe Biden, have demanded that Republicans back off on replacing Ruth Bader Ginsburg — a liberal icon — until after the November 3 election.

Leaders of the Republican majority in the Senate, which is tasked with confirming Supreme Court nominees, said they have enough support to hold a vote on the nomination either before the election or at worst during the “lame duck” session between the election and the inauguration of the next president in January.

“We will certainly do that this year,” Republican Senate leader Mitch McConnell said.

If Barrett is confirmed, the Supreme Court would have a 6-3 conservative majority.

Barrett was only appointed to the bench for the first time in 2017. A deeply conservative Catholic, she is considered hostile to abortion rights — a key issue for many Republicans.

The left-leaning government watchdog group Accountable US was unimpressed with the reported choice. “Barrett has proven time and again that protecting businesses — not people — is her top priority,” said group president Kyle Herrig.

In 2018, the mother of seven was on the shortlist presented by Trump for a seat vacated by the retirement of Justice Anthony Kennedy, a position ultimately filled by Brett Kavanaugh after a ferocious confirmation battle.

For Trump, nominating a conservative judge to the Supreme Court is a way to fire up his base heading into November’s election.

But at Friday’s whirlwind campaign outings, the US president also looked beyond his core supporters and in Florida — where the Latino vote is all-important — said his Democratic challenger Joe Biden has been “very bad to Hispanics.”

“I’m a wall between the American dream and chaos,” he said.

Later in Georgia, he insisted that as president he had exceeded his promises for African Americans.

“I did more for the black community in 47 months… than Joe Biden did in 47 years,” he said, repeatedly swiping at Biden’s legislative record in co-sponsoring 1990s tough-on-crime legislation that many experts say resulted in high incarceration rates for black Americans.

Biden himself did no in-person campaigning Friday but travelled from his home in Delaware to Washington for a ceremony in the US Capitol, where Ginsburg lay in the state — the first woman and Jewish person to do so.

Ginsburg’s last wish reportedly relayed to her granddaughter, was for her seat to be decided by whoever wins the next election.

Trump cast doubt upon the veracity of that in an interview Monday, suggesting it could have been a ploy made up Democratic leaders.

Republican leaders have said that if the fate of a disputed election rests with the Supreme Court, they will need a full bench of judges to prevent a deadlock.

Trump refused Wednesday to clearly guarantee a peaceful transfer of power if he loses, stirring outrage among Democrats.

The Democratic leadership has vowed to do everything in their power to prevent the confirmation of a new justice before the election, but with a 53-47 Republican majority in the Senate, there is little they can do to stop it.