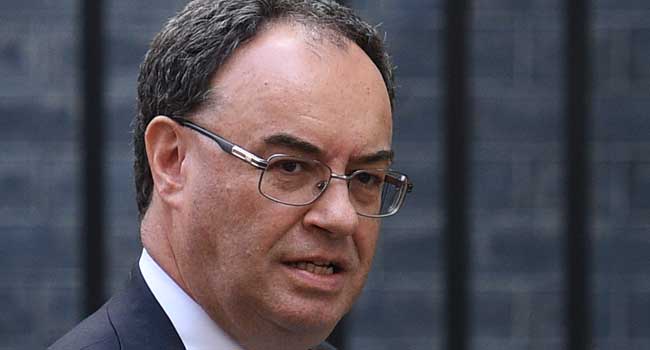 Britain on Friday named Andrew Bailey, head of the Financial Conduct Authority regulator, as governor of the Bank of England to help guide the economy through any Brexit fallout.

“I am delighted to announce that the next governor of the Bank of England will be Andrew Bailey,” said finance minister Sajid Javid, adding that the former BoE deputy will succeed Mark Carney on March 16.

“Without question, he is the right person to lead the bank as we forge a new future outside the EU.”

The 60-year-old Briton, who has spent most of his career at the BoE, will have the heavy task of conducting the country’s monetary policy at the time of its exit from the European Union — promised by new Prime Minister Boris Johnson by January 31.

Canada-born Carney — who steps down after six years in the job — has meanwhile agreed to extend the end of his tenure from January 31 to March 15 to oversee an orderly transition.

Chancellor of the Exchequer Javid added that Bailey was the “clear front runner” in the contest to succeed Carney, describing him as the “standout candidate in a competitive field” and a “leader of international standing”.

Cambridge-educated Bailey worked at the Bank of England in various posts between 1985 and 2016.

He played a key role during the global financial crisis and subsequent vicious recession, overseeing the BoE’s special operations to help troubled banks.

Bailey was also a deputy governor for prudential regulation between 2013 and 2016 when he was appointed as head of the FCA finance sector watchdog.

Javid continued: “What matters is that we appoint someone who can make the right decisions.

“Andrew Bailey has the experience, the record and the character to do just that. He is, without doubt, the best candidate for the job.”

Bailey had been one of the favourites to take over, but there had also been speculation that institution could see its first female chief.

Carney, 54, who became a British national during his time in London, had already extended his tenure twice due to Brexit uncertainty.

The Financial Times, citing sources close to Javid, reported on Friday that all candidates had been “vetted” on “whether their views were compatible with the direction” of Johnson’s pro-Brexit administration.

The BoE under Carney had repeatedly warned over the impact of Britain’s departure from the European Union, arguing it could push the economy into recession.

Friday’s news comes one day after the BoE froze interest rates at 0.75 per cent but left the door open to a reduction in the event of fresh turmoil, in the first decision since Johnson’s election triumph last week.

The new BoE boss may need to consider raising interest rates “back to more normal levels or fight the next downturn with not much ammunition” and defend the bank from “the growing risk of political interference”, noted Ruth Gregory, an economist at Capital Economics.

However, bright official data showed Friday that the British economy strengthened by more than expected in the third quarter of 2019 — despite looming Brexit.

Gross domestic product rebounded by 0.4 per cent in the July-September period, the Office for National Statistics (ONS) said in a second estimate.

That was stronger than the previous estimate of 0.3-per cent expansion and followed a 0.2-per cent contraction in the second quarter — meaning that the economy avoided a technical recession

The BoE had cautioned Thursday that it might need to alter its monetary policy “if global growth fails to stabilise or if Brexit uncertainties remained entrenched”.