Both teams sides were involved in 0-0 draws on the opening day of the tournament and Group A remained goalless until 30 minutes into today’s match when Siyabonga Sangweni’s sweet volley broke the deadlock at Durban’s Moses Mabhida stadium.

Substitute Lehlohonolo Majoro added Bafana Bafana’s second with a fine individual effort after the break as South Africa moved to the top of the section ahead of tonight’s other Group A contest between Morocco and Cape Verde.

The defeat leaves Angola deep in trouble at the foot of the standings and without a goal after two games. Cape Verde awaits Gustavo Ferrin’s men in the final round of group games.

The match got off to a low-key start, with Angola striker Mateus’ effort that slewed wide of target inside four minutes the only chance of note in the early exchanges.

South Africa slowly asserted themselves however, and took the lead after half an hour when Sangweni capitalised on misplaced header by Angola defender Antonio Lunguinha to drill home a low volley from the left edge of the six-yard box.

The hosts might have made it two a minute before the break as Bernard Parker’s shot following a strong run was saved by Mamona Lama.

Moments later Tokelo Rantie headed onto the roof of the Angola net with the goal gaping after Lama could only tamely pat away Thuso Phala’s cross.

Angola threatened seven minutes into the second half when Mateus crossed for Afonso Guilherme to take a first-time shot but Itumeleng Khune got down well to save.

South Africa midfielder Dean Furman’s low shot was then tipped round the post by Lama as the chances continued to arrive at both ends.

A second goal arrived in the 62nd minute as Majoro – having entered the action just four minutes earlier – latched onto a long punt downfield, ran on and beat a defender before cutting in from the byline and slotting the ball home through the legs of Lama.

Angola pushed for a consolation in what time remained, with Manucho going close with a couple of headers, but they again drew a blank and must now beat Cape Verde in their final game if they are to have any chance of reaching the knockout stage. 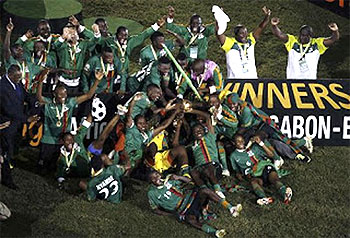 Garba Lawal; a former Nigerian international has refused to be swayed by the back-to-back lacklustre performance of the Zambians in preparation for the AFCON 2013 as he sounded a note of warning to the Super Eagles of Nigeria not to underrate the Chipolopolo.

The Super Eagles of Nigeria are in the same group with the African champions and will be meeting January 25th, 4 days after Nigeria plays Burkina Faso.

In their Pre-Afcon games, Zambia has not been too impressive as the Chipolopolo lost to Angola and Tanzania and got a draw from their game against Morocco but this the former Super Eagles player said cannot be used as a yardstick to the Zambians as they can be very mean.

“Honestly I refuse to overlook the Zambians just because they have not done well in their friendly matches. Anyone writing them off because of the results in their recent friendly matches should have a re-think. 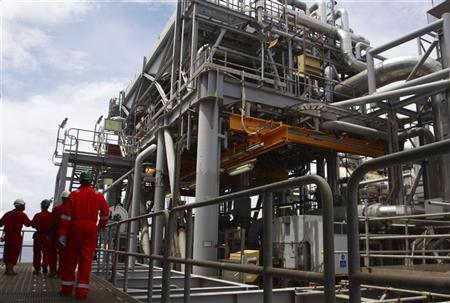 South Africa is looking to source oil from Angola, Nigeria and Saudi Arabia to replace supplies from Iran, which is facing sanctions over its nuclear programme, a top energy official said on Friday.

Africa’s biggest economy used to import a quarter of its crude from Iran, but has come under Western pressure to cut the shipments as part of sanctions designed to halt Tehran’s suspected pursuit of nuclear weapons.

“We intend looking at other countries, specifically in Africa, mainly Angola and Nigeria,” Nelisiwe Magubane, director general at the energy department told journalists. “We also, of course, are going to continue to import from Saudi Arabia.”

South Africa’s crude oil imports from Iran fell 43 percent to 286,072 tonnes in April from the previous month, while supplies from Saudi Arabia nearly doubled to 671,419 tonnes. The remaining 258,184 tonnes came from Nigeria.

The United States granted South Africa an exemption from financial sanctions after the cuts in Iranian imports, Pretoria may still face problems because of sanctions from the European Union, which does not provide any waivers.

Magubane said she expected a “breakthrough” soon in talks with Brussels on the issue.

Any disruption to crude imports could hit fuel supplies in South Africa, which has suffered shortages in the last year because of strikes and refinery problems.

Coordinating Minister for the economy and finance Minister, Dr Ngozi Okonjo-Iweala has finally thrown her hat in the ring for the race for the World Bank’s president.

Flanked by her counterparts from South Africa and Angola, Dr Okonjo-Iweala, unveiled her candidacy at a press conference in Pretoria, on Friday.

Her candidacy is backed by Africa’s leading economies and its two biggest oil producers in a push for greater influence at global financial bodies dominated by rich nations.

According to the two-time Minister of finance, “I consider the World Bank a very important institution for the world and particularly for developing countries deserving of the best leadership,” she said.

“So I look forward to a contest of very strong candidates, and am I confident? Absolutely” she added emphatically.

Her bid was unveiled in the South African capital, hours before the deadline for nominations to succeed current president Robert Zoellick, who is stepping down at the end of his term on June 30.

Former Colombian finance minister and central bank chief, Jose Antonio Ocampo, who has also been tipped to assume the office, announced his candidacy on Wednesday. Washington has yet to announce its own candidate for the office which American has held since it was founded nearly 70 years ago.

Okonjo-Iweala is a respected former World Bank managing director who joined the Goodluck Jonathan administration as finance minister in August. A capacity she once served during the regime of President Olusegun Obasanjo after which she was transferred to the Ministry of foreign affairs before her resignation.

“I have long experience in the World Bank, in government and in diplomacy and I look forward to giving you my vision at the appropriate time,” she said.

“I share the World Bank vision of fighting poverty with passion. The issue is in what direction one must take this to make this the most beneficial,” she said.

The World Bank has 187 member nations and focuses its activities on development loans.

Under a tacit agreement since the World Bank and its sister institution the International Monetary Fund were founded, the United States always selects an American as World Bank president and Europe puts a European at the IMF helm.

That traditional arrangement has triggered outrage from developing and emerging economies seeking greater representation to reflect their rising contributions to the global economy.

The US Treasury in February declared “the United States continues its leadership role in the World Bank,” as the largest shareholder, and would announce its candidate “in the coming weeks.”

Since then, the Treasury has declined to comment on the nomination process.

Secretary of State Hillary Clinton has long been among the most circulated names rumoured to be under consideration by President Barack Obama, along with UN ambassador Susan Rice, Democratic Senator John Kerry and former Treasury secretary Larry Summers.

Clinton has insisted that she is not interested in the job. Another American, economist Jeffrey Sachs, has garnered support for his self-declared candidacy in small developing countries.

Sachs, the director of the Earth Institute at Columbia University, has a decades-long career in development and poverty eradication and headed the United Nations’s Millennium Development Goals project.

A candidate must be presented by the Bank’s 25 executive directors, or by governors through the director representing them on the executive board.

African powers Angola, Nigeria and South Africa on Friday endorsed the nomination of Nigerian Finance Minister Ngozi Okonjo-Iweala, a respected economist and diplomat, as a candidate to take over the World Bank.

The United States faces an unprecedented challenge to its grip on the World Bank presidency, with emerging economies poised to nominate at least one candidate on Friday to set up the first contested bid for the top job at the global development lender.

“The endorsement is in line with the belief that the appointment of the leadership of the World Bank and its sister institution, the International Monetary Fund, should be merit-based, open and transparent,” the three said in a statement on Friday.

South Africa chairs one of the three African seats on the 25-member World Bank board, and earlier this week sources said Okonjo-Iweala’s candidacy was being proposed after consultations between South Africa’s President Jacob Zuma and Nigeria’s President Goodluck Jonathan.

The joint endorsement is a rare bit of unity among the three countries often at loggerheads as they battle for dominance on the continent.

“She has eminent academic qualifications and would be, I think, a candidate of choice not only on the African continent but well beyond as well,” South Africa’s Finance Minister Pravin Gordhan told a media briefing on Friday.

The three countries will lobby other African states to endorse her, Gordhan added.

Brazil said this week that both Okonjo-Iweala and Ocampo would be “great” candidates to replace Robert Zoellick as head of the Washington-based development institution, the latest sign of emerging nations wanting more say in how it is run.

Washington has held the presidency since the bank’s founding after World War Two, while a European has always led its sister organization, the International Monetary Fund.