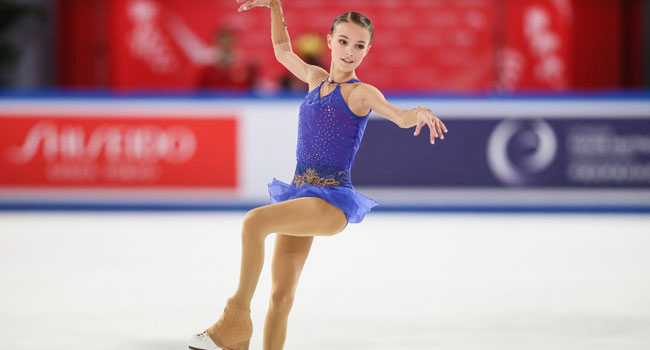 The 15-year-old Russian Anna Shcherbakova dazzled her way to gold at figure skating’s Cup of China on Saturday for her second victory in as many events in the ISU Grand Prix.

China’s Jin Boyang — sporting eye-catching gold-coloured blades on his skates — won the men’s title from compatriot Yan Han in Chongqing, the fourth round of the series.

Shcherbakova’s victory, to go with her triumph at Skate America last month in her Grand Prix debut, propelled her into the Grand Prix Final in Turin next month.

She took the title with an overall 226.04 points to ensure that all four Grand Prix this season have now been won by Russian teenagers.

Silver went to Japan’s Satoko Miyahara with 211.18 points and bronze was won by another Russian, Elizaveta Tuktamysheva, with 209.10.

“It’s a good start for my first senior season but I want to do better and work more,” said Shcherbakova, who effortlessly changed her blue costume to a red one mid-performance.

“I think it is not my maximum now,” she added.

“It was my goal to reach the Final and now I will work on my programmes, my jumps, and my goal will be to do everything cleaner and better.

“There are still mistakes.”

In the men’s, Jin trailed Yan after the short programme but leapfrogged his compatriot with the free skate to take gold with 261.53 points overall.

“I feel very satisfied today and my performance was as spicy as a Chongqing hotpot,” joked the 22-year-old Jin, referring to the famously fiery local cuisine.

“I hope my passion will inspire generations of skaters to come.”

In the ice dance, world silver medallists Victoria Sinitsina and Nikita Katsalapov, again of Russia, clinched gold and the first Grand Prix victory of their career.

They were second in Saturday’s free dance but their five-point lead after Friday’s rhythm dance ensured they remained in first place with 209.90 points overall.