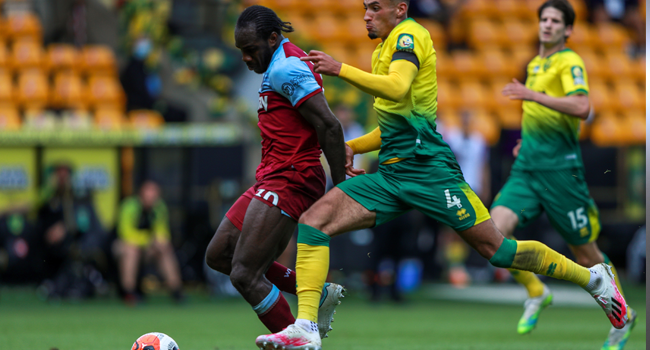 Norwich were condemned to a record fifth relegation from the Premier League as Michail Antonio’s four-goal blitz fired West Ham to a 4-0 win at Carrow Road on Saturday.

Norwich are 13 points from safety with only three games left, meaning they are certain to make an immediate return to the Championship after last season’s promotion campaign.

The Canaries have become accustomed to relegation in the Premier League era, going down on four previous occasions in 1995, 2005, 2014 and 2016.

Farke was already resigned to relegation before this weekend given Norwich had lost every game since the coronavirus hiatus.

“We wanted to beat the odds again but when the dust settles the outcome is more or less what was expected. It doesn’t take anything away from the fact that we are disappointed,” Farke said.

“From the first day after promotion our chances to survive were perhaps 5 percent so in 19 out of 20 cases you will go down. If you have luck and no injuries then you have a chance.

“When we are 100 percent we are competitive but when it’s 96 or 97 percent then it sometimes looks like men against boys. That’s what I expected.”

With all games being played behind closed doors, some Norwich fans might have been relieved not to have to watch the embarrassment of their limp demise in person.

In truth, they have looked out of their depth among the Premier League elite from the moment they paid the price for a naively attacking game-plan in a 4-1 defeat at Liverpool on the opening day of the season.

Farke was hamstrung by Norwich’s decision not to spend big money on new signings following their promotion.

Since Teemu Pukki’s early-season goal rush dried up, they have been on a relentless slide towards the Championship.

A 3-2 win over Manchester City was a rare highlight but just weeks later a 5-1 home defeat against Aston Villa underlined the problems undermanned Norwich would endure all season.

West Ham’s second win in four games was a huge lift to their hopes of staying up.

David Moyes’ side are six points above the bottom three with three games left against Watford, Manchester United and Aston Villa.

The early signs were ominous for Norwich as West Ham took the lead in the 11th minute.

Arriving to meet Issa Diop’s flick from Jarrod Bowen’s corner, Antonio volleyed into the roof of the net from close-range for his third goal in his last four games.

Norwich were surrendering with a whimper and Antonio pushed them closer to the relegation trap door in first half stoppage-time.

Rising above the meek challenge of two Norwich defenders, Antonio glanced his header into the far corner from Mark Noble’s free-kick.

Antonio was proving unplayable for the leaky Norwich rearguard and he completed his hat-trick in the 54th minute, looping a header into the net after Tim Krul saved his initial effort.

Antonio completed a memorable personal performance with his fourth goal in the 74th minute, coolly finishing from Ryan Fredericks’ cross.

Troy Deeney scored two penalties as Watford improved their survival prospect with a 2-1 win against Newcastle at Vicarage Road.

Newcastle snatched the lead in the 23rd minute when Matt Ritchie’s corner was flicked on by Federico Fernandez and Dwight Gayle bundled home at the far post for his third goal of the season.

But Deeney pulled Watford level seven minutes after the restart.

Kiko Femenia was clipped inside the area by Ritchie and Deeney smashed the penalty past Martin Dubravka.

In the 82nd minute, Javier Manquillo brought down Ismaila Sarr and Deeney stepped up again to bury his second penalty.

Both teams sides were involved in 0-0 draws on the opening day of the tournament and Group A remained goalless until 30 minutes into today’s match when Siyabonga Sangweni’s sweet volley broke the deadlock at Durban’s Moses Mabhida stadium.

Substitute Lehlohonolo Majoro added Bafana Bafana’s second with a fine individual effort after the break as South Africa moved to the top of the section ahead of tonight’s other Group A contest between Morocco and Cape Verde.

The defeat leaves Angola deep in trouble at the foot of the standings and without a goal after two games. Cape Verde awaits Gustavo Ferrin’s men in the final round of group games.

The match got off to a low-key start, with Angola striker Mateus’ effort that slewed wide of target inside four minutes the only chance of note in the early exchanges.

South Africa slowly asserted themselves however, and took the lead after half an hour when Sangweni capitalised on misplaced header by Angola defender Antonio Lunguinha to drill home a low volley from the left edge of the six-yard box.

The hosts might have made it two a minute before the break as Bernard Parker’s shot following a strong run was saved by Mamona Lama.

Moments later Tokelo Rantie headed onto the roof of the Angola net with the goal gaping after Lama could only tamely pat away Thuso Phala’s cross.

Angola threatened seven minutes into the second half when Mateus crossed for Afonso Guilherme to take a first-time shot but Itumeleng Khune got down well to save.

South Africa midfielder Dean Furman’s low shot was then tipped round the post by Lama as the chances continued to arrive at both ends.

A second goal arrived in the 62nd minute as Majoro – having entered the action just four minutes earlier – latched onto a long punt downfield, ran on and beat a defender before cutting in from the byline and slotting the ball home through the legs of Lama.

Angola pushed for a consolation in what time remained, with Manucho going close with a couple of headers, but they again drew a blank and must now beat Cape Verde in their final game if they are to have any chance of reaching the knockout stage.