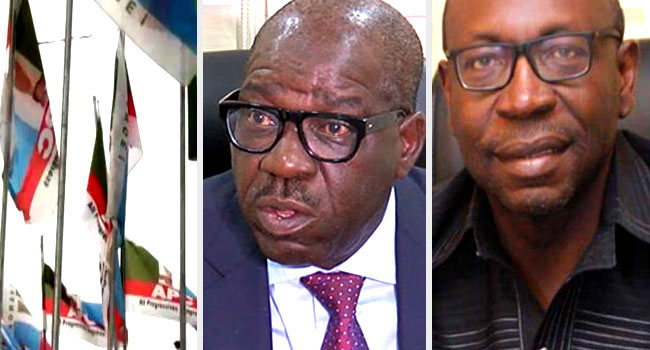 Pastor Osagie Ize-Iyamu has called on Governor Godwin Obaseki of Edo State to sheathe his sword and return to the All Progressives Congress (APC).

Pastor Ize-Iyamu made the appeal on Monday in Benin City, Edo State after he emerged as the governorship candidate of the APC for the September 19, 2020 poll in the South-South State.

According to him, Governor Obaseki should “set aside his anger” and return to the APC, adding that it will be a mistake for him (Obaseki) to leave the party.

He argued that there are bound to be issues in “every family” and that it would be bad for Obaseki to leave the APC due to some disagreements.

“I will like to appeal to him to return to the party,” he said. “In every family, you have disagreements; let it not be said that it was this disagreement that pushed him out.”

The governorship candidate of the Peoples Democratic Party (PDP) in the 2016 Edo election said he made “that mistake before and I have come to realize it was a grievous error and I would not want him as an elder brother to make the same mistake.”

Furthermore, he said Obaseki’s defection to the PDP is not the best choice, assuring that he would work with him (Obaseki) for the betterment of Edo State if he returns.

Pastor Ize-Iyamu explained that in the “APC, he (Obaseki) is recognized as a leader but in the new party you are going to, it will be difficult for them to accept you as a leader.

“It would be nice for him to come back and we are ready to work with him and all well-meaning Edo people.”

The APC governorship candidate called on Edo people and political parties to eschew violence during the election campaign, urging them to work in an “atmosphere of peace and love.”

He lamented that the atmosphere in the state has been tensed in the past few months which he admitted had slowed down the pace of development.

The APC also did well in conducting its primary election without violence, according to Ize-Iyamu who lauded members of the party for the peaceful exercise.

Obaseki joined the PDP on Friday, June 19, 2020 after quitting the APC and had picked up his PDP membership card at the party’s secretariat in Benin City.

While addressing party officials, the governor said he automatically becomes the PDP leader in the state following his defection.

Obaseki also reiterated his commitment to providing what he described as quality leadership, adding that he is ready to lead the party to victory in the governorship election.

He noted that “the energy I see in this party is the kind of energy I require to take Edo to the level we should go to next.”