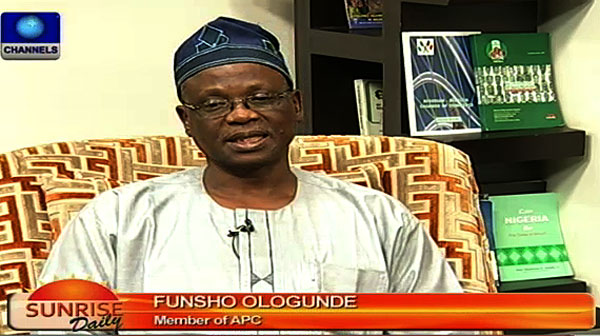 A member of the new merger political party; APC, Funsho Ologunde says the creation of  merger political party the Allinace for Progressives Congress (APC) was borne out of the desire give Nigerians a ‘better Nigeria’,also debunkiung political insinuations that most key members of the new Alliance for progressive Congress (APC) are splinters of or have their roots traced to the ruling party Peoples Democratic Party(PDP).

Mr. Ologunde who was a guest on Sunrise Daily, said the emergence of APC as a merger political party described the APC as party with a difference from the conventional political parties, because it tends to achieve more and better than with its synergy as stakeholders from the merged parties come on board with different party backgrounds, ideas which will come in useful in decision-making for a better Nigeria.

“There are a lot of things that are new, there is this synergy that produces greater effect, greater energy and what that means is that it will be ACN doing things the way it was known as ACN, CPC doing its own, ANPP doing its own

“We are not talking of gurus from three different political parties that have been individually identified as opposition parties, coming together to put together their thoughts, synthesizing their advantages and then learning from their weaknesses to present a more formidable organisation”


He however implored Nigerians not to make any meaning out of aspersions casted by the ruling party at the APC, because the sole purpose of a merger between the strong oppositions ACN, CPC and ANPP, in Nigeria was to give Nigerians a voice and better their lives as well.

“I want to assure Nigerians that each time a PDP man goes on air like it happened yesterday, where the president said there was going to be bla,bla,bla for 2015 elections, it’s not to be taken as a threat, because such things are never objective analysis of the situation

” When all these forces, the previous political parties, came together and decided to work together, for the betterment of the generality of Nigerians, we are going to see with the emergence of APC that has already come on board, stronger, more potent, more forceful and more aggressive than the previous opposition parties”