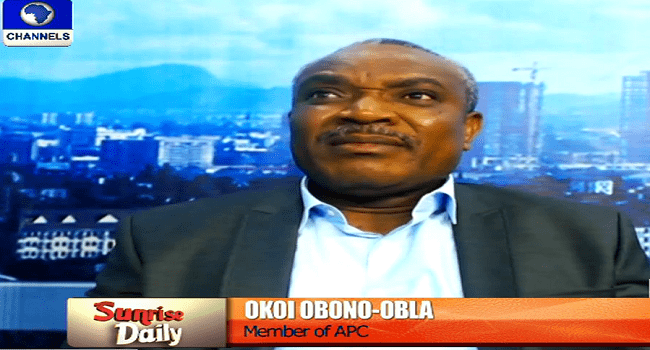 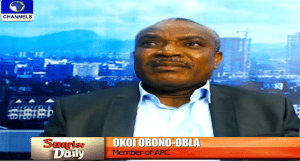 A former member of the Legal and Security Directorate of the All Progressives Congress (APC) Presidential Campaign Council, Mr Okoi Obono-Obla on Monday blamed “forces of corruption” for producing the “so called 100 days promise” by President Muhammadu Buhari.

“As far as I am concerned the 100 days is nothing. How do you expect a government to transform the country in 100 days? It is far-fetched, it is a gimmickry by those people who were afraid of APC, who portrayed the APC maliciously and falsely as a northern and Muslim party.

“It is far from the truth”, he maintained.

Mr Obono-Obla, who made the claim on Tuesday while speaking on Channels Television’s Sunrise Daily, alleged that since the “PDP devastated the country in 16 years of misrule”, neither the APC nor the President would have produced such a document because “it is unrealistic”.

He further argued that President Buhari’s administration has “in 100 days, made Nigeria to earn a lot of respect from other countries”, adding that “the amount of stealing going on now has reduced compared to five or six months ago”, maintaining that “everyone is on his toes.

“We have seen a lot of gains from the fight against corruption. Fighting corruption is not all about putting people into jail. But I know that a lot of people are returning money that was illegally taken out of the treasury” he said.

Mr Obono-Obla’s views are coming days after President Muhammadu Buhari distanced himself from two documents containing promises on what he would achieve in his first 100 days in office.

A statement from his Senior Special Assistant on Media and Publicity, Mallam Garba Shehu titled: “Understanding Buhari in 100 days” said he has no knowledge of the two campaign documents which reportedly emanated from the party’s “many centres of public communication which, for whatever reason, were on the loose.”

According to the statement, “There is a certain document tagged “One Hundred Things Buhari Will Do in 100 Days” and the other, “My Covenant With Nigerians.”

“Both pamphlets bore the authorised party logo but as the Director of Media and Communications in that campaign, I did not fund or authorise any of those. I can equally bet my last Kobo that Candidate Buhari did not see or authorise those publications.

“As a consequence of these publications, expectations have been raised unreasonably, that as President, Muhammadu Buhari, will wave his hand and all the problems that the country faces — insecurity, corruption, unemployment, poor infrastructure would go away.

“But that notwithstanding, President Buhari has given the job his best shot and the whole country is saying that we never had it so good. He has re-instituted the values of hard work and administrative efficiency. The President says times without number that this country needs to fix governance and that he won’t tolerate laziness.