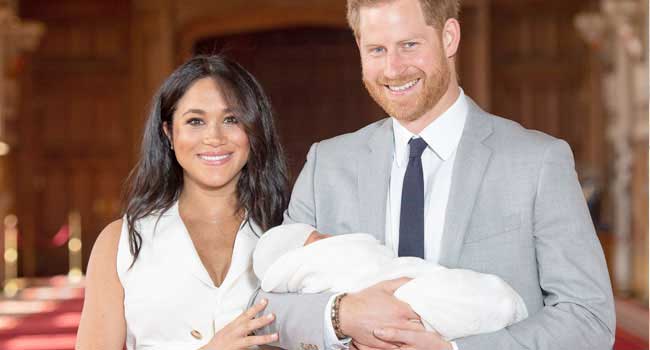 Prince Harry arrived in Canada to rejoin his wife Meghan and son Archie on Monday, British media reported, as the couple start a new life after their shock exit from the royal fold.

The Daily Mail newspaper said he landed at Vancouver International Airport on British Airways flight 85 from London’s Heathrow at about 7 pm local time.

It published a photo of him wearing a blue beanie and jeans with a backpack over his shoulders after slipping out a back staircase, escorted by security.

Sky News published footage of Harry descending the steps of an aircraft.

A waiting minivan on the tarmac took him to a connecting flight to Victoria, where he and his family spent the last two months.

The information could not be confirmed by AFP journalists who had staked out the Vancouver and Victoria airports. A videographer, however, saw two vehicles leaving the Victoria area mansion where the couple had been staying for the past two months.

The Duchess of Sussex was earlier spotted with Archie taking dogs for a walk in the neighbourhood.

She’d also made outings last week to Vancouver, visiting a women’s shelter and a charity that supports girls.

According to local reports, the couple is looking to buy a beachside house in Vancouver, or possibly in Toronto, where Meghan spent several years while acting in the television series “Suits.”

Earlier, Queen Elizabeth II’s grandson, who remains sixth in line to the throne, attended the UK-Africa Investment Summit in London, seems in good spirits as he met the presidents of Malawi and Mozambique and the Moroccan prime minister.

He also had an informal 20-minute private meeting with British Prime Minister Boris Johnson, who hosted the event.

Harry skipped a summit dinner for visiting African leaders at Buckingham Palace in order not to overshadow his brother William’s hosting of the event, the Daily Mail reported.

He and Meghan are bowing out entirely from representing the British monarchy, in a crisis that has shaken the centuries-old institution.

He said on Sunday night they did not want to quit their royal duties but reluctantly accepted there was “no other option” if they wanted to cut loose from public funding and seek their own income in pursuit of more independent life. 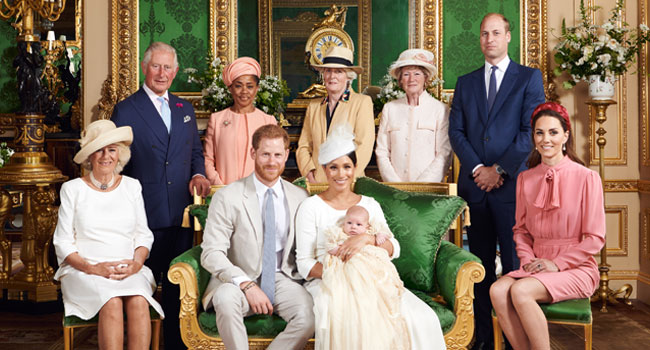 Prince Harry and Meghan’s baby son Archie was on Saturday christened in the chapel at Windsor Castle in a private ceremony following his birth in early May.

The couple’s first child — who is seventh in line to the British throne — wore a handmade replica of the royal christening robe, which was made in 1841 for the christening of Queen Victoria.

The replica has been worn by royal infants at christenings for the last 11 years.

Archbishop of Canterbury Justin Welby baptised the two-month-old using water from the River Jordan and the silver Lily Font, a royal heirloom, in accordance with tradition.

The Duke and Duchess of Sussex released two photographs of them with Archie on their social media accounts, showing his face for the first time.

In one picture, they are surrounded by close family while in the other the couple are cradling him.

Meghan’s mother Doria Ragland, Harry’s brother William and his wife Kate, and their father Prince Charles and his wife Camilla, all posed in the picture.

The sisters of the late Diana, Princess of Wales — Harry and William’s mother — also attended and featured in the family photo.

The names of Archie’s godparents were not released by Harry and Meghan and remain a mystery. 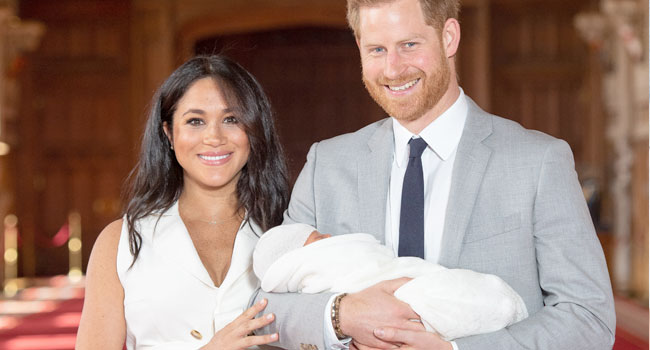 “The Duke and Duchess of Sussex are pleased to announce they have named their first born child: Archie Harrison Mountbatten-Windsor,” the couple announced on their Instagram account.

The couple gave the world the first glimpse of their “dream” newborn boy on Wednesday — but kept people guessing on what his name will be.

Harry, 34, and Meghan, 37, emerged in front of the cameras inside Windsor Castle to show off their son born on Monday, ahead of introducing him to great-grandmother Queen Elizabeth II.

“He’s just been a dream,” said a smiling Meghan, in her first public comments since giving birth to the seven-pound, three-ounce (3.26-kilogram) baby, who stayed firmly asleep during his public unveiling.

“He has the sweetest temperament. He’s really calm,” added the Duchess of Sussex, as Prince Harry cradled the newborn, wrapped in a white blanket, by her side.

Royal watchers have been desperate for a glimpse of the new baby, who is seventh in the line to the British throne, ever since the couple announced his birth to their 6.5 million followers on Instagram with the message “It’s a BOY!”

But they disappointed those keen to know what they will call him, with neither new parent mentioning a name on Wednesday.

Instead, Harry focused his comments on life as a proud dad.

“Parenting is amazing,” he said, the day after brother Prince William — two years his senior and with three children of his own — had jokingly welcomed him to the “sleep deprivation society that is parenting”.

“We’re just so thrilled to have our own little bundle of joy.”

Meghan added: “It’s been a special couple of days.”

“He looks absolutely adorable, he is like a little doll, isn’t he?”, she said outside Windsor Castle, west of London. “What proud parents he’s got.”

The couple revealed Queen Elizabeth’s husband Prince Philip, the Duke of Edinburgh, had got a sneak preview in a chance encounter in the corridors of Windsor Castle.

“We just bumped into the Duke as we were walking by, which was so nice,” said Meghan.

“It’ll be a nice moment to introduce the baby to more family.”

Prince Charles, on a visit to Germany on Tuesday, said he was “obviously delighted” and “impatient” to see his fourth grandchild.

The heir to the British throne, speaking in German, said he would see the baby “in the coming days when things are calmer”.

Crowds have gathered outside Windsor Castle all week to wish them well.

It was a rare piece of good news for a nation consumed by the protracted Brexit drama.

And it has given people a chance to celebrate royal traditions — this time with a young American twist.

Former US TV star Meghan has created a fresh buzz around the century-old House of Windsor. Some fans have also been intrigued by her heritage.

“I want to see how he’ll look. As Meghan is mixed race, I’m curious”, said Zahra Kibue, 34, who lived in Kenya before moving to England a few years ago.

Meghan has also made waves with her modernising ways.

She raised eyebrows by closing her own car door — a task usually performed by aides — and has ignored tradition by keeping the birth private and well away from the prying media’s eyes.

– ‘Crazy’ name speculation –
Most UK media assumed that Meghan had opted for a home birth, but The Daily Mail reported that those plans were “dashed as she was secretly whisked to a London hospital on Sunday by Harry and his Scotland Yard security team”.

British bookmakers will be pleased that the suspense remains around what the new arrival will be called, after a busy few months of betting on the name.

“We’re very lucky to have them in our country and I look forward to hear what he’s called,” said Windsor tourist Jenny Bronson.

UK royal names are normally chosen from a relatively restricted pool of those used by past kings and queens.

But Meghan and Harry are anything but normal royals.

“Meghan Markle and Prince Harry to choose an unusual name for the baby that UNIFIES the US and UK,” The Daily Express wrote, sparking a wild guessing game on Twitter filled with puns and jokes.

Alexander is the current bookmaker’s favourite, but odds have recently tumbled on Theodore, according to Paddy Power, following reports that the name would have a US twist.