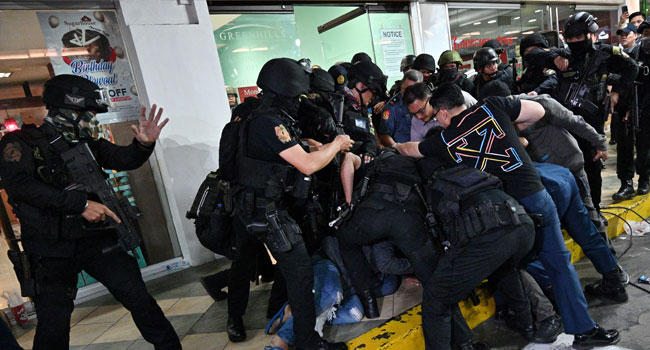 A sacked security guard who shot one person and took about 30 others hostage at a Manila shopping mall on Monday surrendered to authorities, ending a day-long standoff that terrified shoppers and drew a massive police response.

The guard walked out of the V-Mall, where he was allowed to speak briefly to the press before heavily armed officers tackled and arrested him.

He complained about being mistreated by his employers.

Hostages were also led out of the building, but police did not say whether any of them had been hurt nor the exact number caught up in the violence.

The drama started when the suspect shot a security guard, who was rushed to hospital in stable condition, said Francis Zamora, mayor of the San Juan City, which includes the mall.

Zamora told reporters the hostage-taker was upset after losing his job.

Authorities worked for hours to convince him to surrender, and later in the day held a press conference where company officers apologised for upsetting the suspect.

“I deeply regret my shortcomings,” one supervisor said.

“Because of this, I will resign from my post… to give way to a solution to our current problem.”

Police were in contact with the suspect for hours via a walkie talkie.

Philippine malls are centres of life that include everything from restaurants and shops, to churches and medical facilities. The building was full when the violence began.

Zamora said authorities believed there were “around 30” people held.

Witness John Paul Buenavista told AFP he saw a wounded person — believed to be a guard at the mall — being put into a wheelchair and whisked away.

“We heard three gunshots. Then we saw people running, saying they saw someone getting shot,” he said.

Manila was the site of a high-profile 2010 hostage-taking that ended with the deaths of eight Hong Kong tourists.

That day-long ordeal started when an ex-police officer, armed with an M-16 assault rifle, hijacked a bus near a popular tourist destination just a few blocks from police headquarters in a desperate bid to get his job back.

Negotiations broke down after nightfall and the ex-officer began shooting passengers, prompting commandos to storm the bus.