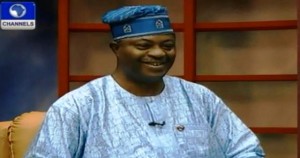 Two Delegates at the National Conference, Tony Nyiam and Bisi Adegbuyi, have both said that their recommendation at the conference is a restructuring of Nigerian government to practice the federalism that accommodates its ethnic peculiarities.

Mr Nyiam said that ethnicity is an important part of Nigeria which cannot be separated from its existence. He said that Nigerians had been carried away by the federalism as practised in America but he believed that Nigeria should have an “Ethnic Federalism” where people’s ethnicities are well recognized.

He noted that America is a country of immigrants and Nigeria should not compare itself to such country. You cannot stop a Buku man from being one. He emphasized that Nigeria needs a return to the federalism that recognises its ethnicity.

Adegbuyi, although differed on the call for “Ethnic Federalism” as he said that “federalism is federalism all over the world” but he acknowledged that indeed, the way to go was for Nigeria to try and understand the agenda of each ethnicity and not to tag ethnicity as a divisive factor.

He noted that Nigeria’s past leaders and the colonial masters knew that Nigeria was made up of different nations and the country in its current state should not pretend about this reality. Citing the developments recorded by regional leaders in the 1960s, he said that empowering regional leadership would be more productive.

Nyiam also emphasized the need to move “from Fiscal Centralism to Fiscal Federalism”, a situation whereby the count

ry moves from the culture of sharing resources at the Federal level and focus on creating those resources.

He agreed with Mr Adegbuyi’s earlier statement on the need to decentralize the government and empower regional governance. He agreed that the system of governance as practised in Nigeria in the 1960s gave Nigeria its best records of development.

Secretary of the Arewa Youth, Ahmed Tijani, representing his organisation’s position on the programme, however, said that they were supporting the

conference because they believed that “half bread is better than none” noting that what they had called for was a sovereign national conference.

He further said, “There is no point in time that Nigeria should experience a breakup”, so “whoever is in the driving seat”

would need support to ensure this. He said that he hoped that at the end of the conference, something good would come out.

One of the delegates, Tony Nyiam, while expressing confidence in the conference and in the sincerity of President Jonathan was of the view that Nigerians were paying too much attention to the nomenclature of the conference.

Mr Adegbuyi, who is a legal practitioner, quoted Section 14 Subsection 2 of the 1999 Constitution which he said, gives the sovereignty of the country to the people, stating that this was also acknowledged by the President.

He stated that there was nothing that makes the ongoing conference less sovereign and that the misconception about the sovereignty of the country having been given to the National Assembly was an exaggeration of their roles.

Reference was also made to the position taken by the Northern Elders’ Forum, who have expressed their stance not to support the conference and dissociated themselves from the delegates at the conference.

Tijani said that the difference in their positions from the elders’ was because the elders are conservative while the youths are progressive. He added that while they do not totally disagree with the elders’ views, they would not tow same line because they are young, “We want change and we have to be for the conference so that things can move on”

On the possibility of the delegates having a unified discourse without ethnic sentiments, Tijani said that the Nigerian President should have made fixing the identity issues of Nigerians a priority ahead of the national Conference, citing the branding of all Northerners as Boko Haram as one of the examples of how many Nigerians still feel different from other Nigerians.

He also complained about the representation of youths at the conference as being too low for a country whose youth population is very high.

Although Adegbuyi disagreed on the youth representation, Nyiam agreed that the youths should be given focus especially in terms of empowerment. He said that the main sectors in which Nigeria derived pride had been held by the youths – entertainment, sports. Therefore, the country needs to go back to the system that allows the youths to flourish.

Adegbuyi, in conclusion, believes that the National Conference has the capacity to move Nigeria forward but the major focus should be how to achieve unity without sacrificing autonomy.

The groups in a joint press statement said they “find it regrettable that David Mark, himself a northerner and occupying his present office by the grace of the North should turn round to accuse the region’s elders of being behind the crisis.”

Mr Mark had on Monday at the beginning of 2012 Senators Retreat in Uyo, the Akwa-Ibom state capital called on leaders of the northern states to think properly before they allow what he called “a few selected cabals in Boko Haram” bring the north to its knees with what they are doing.

The groups, Arewa Youth Development Foundation and The Arewa Youth Consultative Forum challenged the senate president to name those he claimed are behind the sect.

“We hereby categorically challenge him to name those he claimed in his statement to be behind the terror group and to tell the world the action Mark has ever led the Senate to take towards arresting the security threat.”

The groups accused Mark of doing nothing towards resolving the Boko Haram crisis.

“It is even embarrassing for Mark, who has not for once attempted to meet with any of the elders, political leaders; religious or cultural leaders on how to resolve the situation, to now find the courage to point accusing fingers particularly at the elders”, the groups said.

Read the full text of the joint press statement below:

1.We read with great concern reports attributed to the Senate President David Mark tending to blame the elders of the North for the perpetration and escalation of violence in the region.

2.We find it regrettable that David Mark, himself a northerner and occupying his present office by the grace of the North should turn round to accuse the region’s elders of being behind the crisis.

3.It is unfortunate that Mark, supposedly a public figure and people’s representative should publicly admit not being aware of the concerted efforts by the Northern Elders Forum that has cut across religious and tribal boundaries; the various meetings held by the Northern Governors Forum the northern traditional rulers and various coalitions of religious leaders.

4. It is discouraging for Mark to have publicly admitted or pretended not to know that the northern elders he now accuses, have in their effort recently visited and presented a comprehensive document advising President Jonathan on how to handle the security situation.

5. It is even embarrassing for Mark, who has not for once attempted to meet with any of the elders, political leaders; religious or cultural leaders on how to resolve the situation, to now find the courage to point accusing fingers particularly at the elders.

6. We hereby categorically challenge him to name those he claimed in his statement to be behind the terror group and to tell the world the action Mark has ever led the Senate to take towards arresting the security threat.

7. Let Mark tell the world why his Senate deliberately ignored the various written calls made to it for intervention by calling for a public hearing on the matter particularly by youth groups.

8.Rather than heeding those calls, Mark’s Senate chose to pursue issues that involve money.

9. Let Mark tell the world if the northern elders have that power to restore peace beyond offering advice and calling for caution which they have been doing diligently though he pretends not to be aware of that.

10. And let Mark explain why his Senate could not initiate the steps that led to the present moves by the presidency towards changing the security arrangement while the House of Representatives did summon the President and security chiefs.

11. Indeed it is disrespectful for a son of the region in his position who has never visited any of the cities to console with victims of the violence to now attempt to blame its persistence on his own elders.

12.It is on record that Mark has never visited Maiduguri, Kano or Potiskum to console with families of the thousands of people slaughtered in the course of this violence but now finds the voice to criticise respected elders of the North.

13.More worrying is the part of Mark’s statement that tended to suggest that non-Muslims are the main target and primary victims of the attacks even after the Muslim community which has openly distanced itself from the actions, also happen to have recorded greater loss in terms of human and material casualty.

14.Even more insensitive is the manner in which Mark closed his eyes to universal fact that almost all those so far arrested in possession of explosives and dangerous arms; those arrested with the actual bombing or attempts to blow up the places of worship referred to by Mark, happen to be non-Muslims.

15.More dangerously divisive is that Mark, rather than making statements expected from leaders that could enhance religious harmony and understanding, chose to single out a certain religious group for pacification.

16.Finally, while we join other well-meaning Nigerians in condemning the violence and its perpetrators, we welcome the recent bold moves by President Jonathan to reposition the nation’s security structure, we caution the presidency to beware of the utterances of people like Mark who have clearly disconnected with the situation on ground.

17.We call on Mark to concentrate on cleaning the embarrassing scandals engulfing the Senate and stop diverting the nation with unintelligent accusations.

18.No diversionary tactic from Mark or anybody else can take the nation’s attention from the inadequacies of the Nigerian Senate with regards to sensitive national issues.

19. The nation knows that the Senate did not for instance take any action with regards to the vexed issue of fuel subsidy and that it was the Reps that even as much as showed concern.

20.We are convinced that most Senators are only using the Senate as a refuge to acquire immunity from investigations into their past commissions or omissions while in various positions of power.

21.Consequently we have resolved to launch an agitation for the scraping of the Nigerian Senate from the nation’s democratic structure as it only serves as a gateway for huge financial wastage while not performing its constitutional expectations.