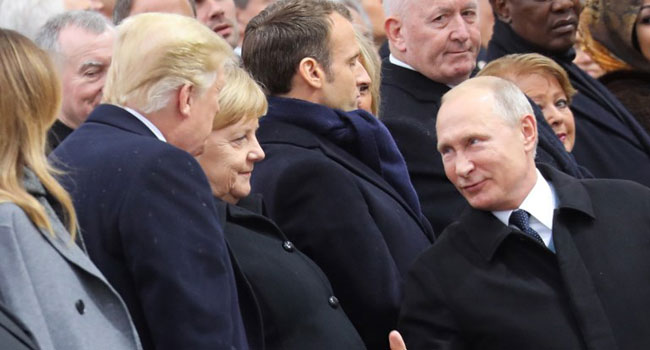 United in the rain, world leaders walked slowly up the Champs-Elysees in Paris to mark a century since the end of World War I — but there were two notable absences, Donald Trump and Vladimir Putin.

The line of black-clad leaders was reminiscent of another moment of unity: after the 2015 Charlie Hebdo jihadist attack, when senior officials from more than 40 countries marched through Paris to denounce terrorism.

But on Sunday both the US and Russian presidents arrived separately for the solemn ceremony at the Arc de Triomphe, skipping the bus ride and symbolic walk with other leaders.

His trademark bright red tie stood out among the dark coats in the front row as he and Putin stood either side of Macron.

The French president walked alone through the rain to greet veterans to the strains of the national anthem, La Marseillaise.

The moment stood in contrast to Trump’s much-criticised decision Saturday to call off a US cemetery visit because of rainy weather.

In another stark contrast with Trump, Macron went on to deliver a forceful speech against fear-mongering and isolationism, calling on fellow leaders to fight together for peace.

“Nationalism is a betrayal of patriotism,” Macron said.

“Let us build our hopes rather than playing our fears against each other.”

‘Will we ever learn?’

The ceremony, to remember the millions who died in the war, including colonial troops fighting for European powers, had a deliberately international flavour.

High-school students read letters from soldiers at the front in English, French, German and Chinese.

“Am I dreaming?” read one letter from a French soldier upon learning that four years of brutal trench warfare were coming to an end in November 1918.

“I’m so happy, I can hardly believe that the news is true,” he wrote.

Another letter, from a British soldier, read: My darling parents, today has been perfectly wonderful. We got news of the armistice at 9.30 this morning… The streets were packed with wildly cheering civilians.”

The crowds who braved the rain for the ceremony along the famed Champs-Elysees boulevard in Paris also came from far afield.

Nevan Lancaster, a 47-year-old from New Zealand, extended a work trip to Europe to pay his respects to a grandfather who fought in the war.

“I’m here for him. He didn’t speak about the war — it was his job, it was his duty,” Lancaster told AFP.

Keith Evans, a 70-year-old Scot, said he had come “to remember the sacrifice and the cost” of a conflict that claimed up to 20 million lives.

“I hope that with this event, the leaders here will learn the lesson of what President Macron has just said,” Evans said, a remembrance poppy pinned to his raincoat.

“We should do better for peace,” he added. “Will we ever learn? I hope so.”

After the ceremony, which ended with Macron lighting anew the flame at the Arc de Triomphe’s Tomb of the Unknown Soldier, the leaders headed for lunch at the presidential palace.

As Trump made his way towards his limousine, there was some booing from the crowd. 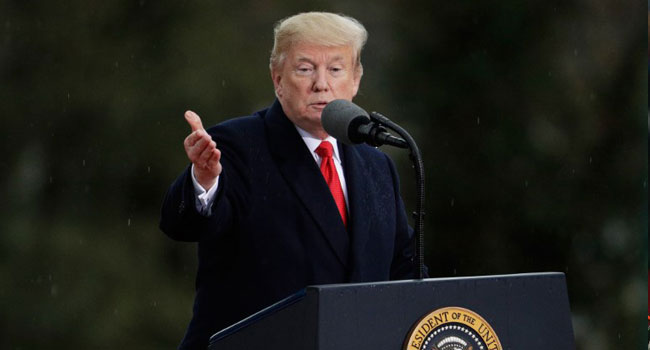 President Donald Trump paid tribute to the “brave Americans” who died in World War I as he visited a US cemetery in France, a day after drawing fire for cancelling a similar trip due to rain.

Speaking at the Suresnes cemetery in the western Paris suburbs Trump said he and other officials were “gathered at this hallowed resting place to pay tribute to brave Americans” who died a century ago, as well as to the French troops with whom they fought. 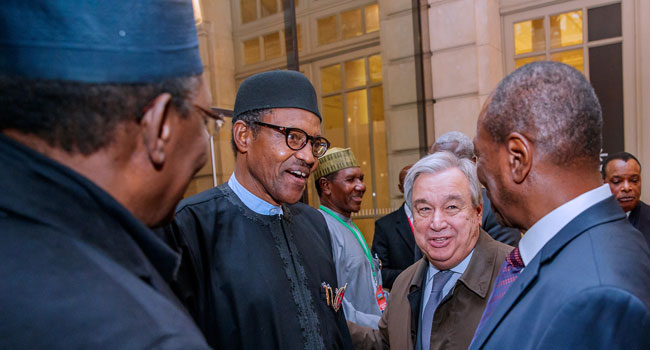 President Muhammadu Buhari on Sunday attended a dinner in honour of visiting Heads of State in Paris, the capital of France.

He also met with the United Nations Secretary-General, Antonio Guterres and other world leaders in discussing contributions towards global peace while underscoring the imperative of collective action. 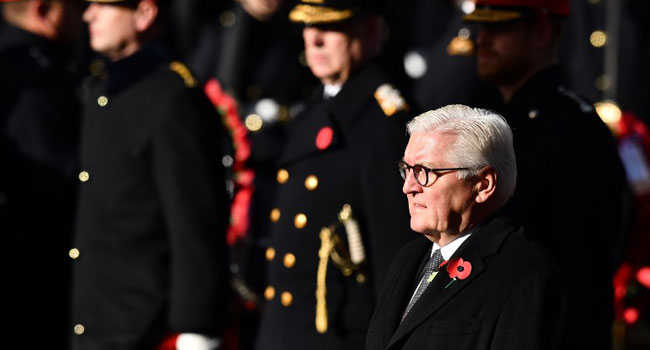 President Frank-Walter Steinmeier became the first German leader to take part in Britain’s national service of remembrance on Sunday, 100 years since the end of World War I.

He laid a wreath at the Cenotaph war memorial in central London alongside British Prime Minister Theresa May, who chose not to join other world leaders marking the centenary of the Armistice in Paris.

Across Britain, individuals and communities held two minutes silence at 11 am (1100 GMT) to remember the end of the four-year conflict which claimed 18 million lives.

In London, the moment was marked by the chiming of Big Ben, which has been largely silent since renovation work began in August 2017 but which still sounds for important national events.

Prince Charles laid the first wreath of red poppies, Britain’s emblem of remembrance, at the Cenotaph on behalf of his mother Queen Elizabeth II, who watched from a nearby balcony.

Steinmeier followed with his wreath, in a unique and highly symbolic act marking the reconciliation between the once warring nations.

Senior royals, diplomats, military leaders and politicians also paid their respects at the memorial to all British and Commonwealth service personnel who have died in combat since 1914.

They were followed by the traditional march past by military veterans, their medals glinting in the sunshine, as a crowd of thousands looked on. 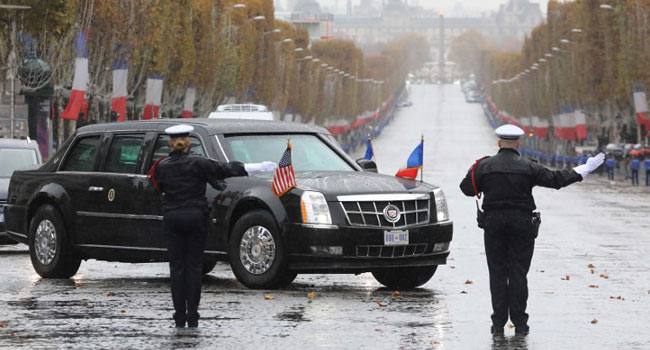 French police on Sunday arrested three topless rights protesters who approached the motorcade of US President Donald Trump on the Champs-Elysees in Paris heading to a ceremony marking 100 years since the end of World War I.

One of the protesters, who had slogans including “fake peacemakers” and “hypocrisy parade” written on their chests, got within meters of the rear of the motorcade after jumping over a barricade.

She was grabbed by a police officer, while a second woman could be seen being hauled away by security services on the edge of the famous thoroughfare.

A third woman, who was positioned a little higher up the avenue, also managed to breach the security cordon and run towards Trump’s convoy with her arms raised.

She too was quickly overpowered by the police and all three were arrested.

The incident revealed chinks in the tight security put in place for the event, with some 10,000 security force members deployed around a city which has been hit by a series of jihadist attacks since 2015.

Interior Minister Christophe Castaner said Trump’s security had “in no way been threatened”.

Inna Shevchenko, one of the leaders of radical feminist group Femen, confirmed the group was behind the protest.

“FEMEN activists ‘welcomed’ the cortege of @realDonaldTrump twice on his way to Arc de Triumph,” she tweeted.

Constance Lefevre, another activist who was among the crowd but did not participate in the protest, told AFP that Femen was protesting the presence in Paris of leaders “who are responsible for most of the world’s conflicts”.

Trump’s motorcade briefly paused due to the breach of security before continuing on to the Arc de Triomphe where around 70 world leaders had gathered to mark the centenary of the Armistice.

Three Femen protesters had already demonstrated at the Arc De Triomphe on Saturday morning to denounce the presence of “war criminals” among the guests at the ceremony.

The three were also arrested.