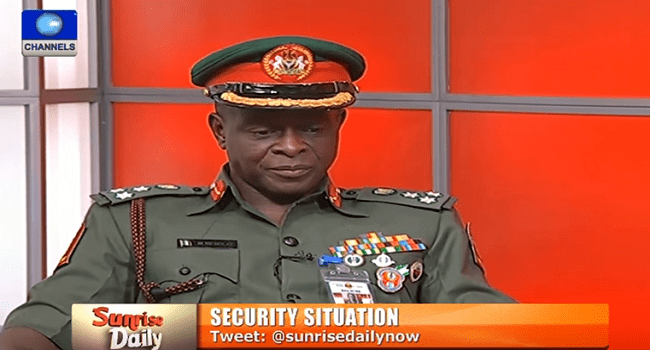 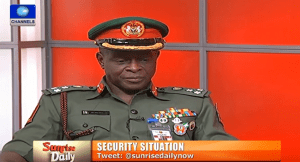 The Chief of Civil/Military Affairs, Army HQ, Brig. Gen. Nicholas Rogers says territories held by the insurgents have been liberated as the people are returning back to their communities gradually.

Rogers was the guest of Channels Television’s Sunrise Daily on Thursday, December 10, where he gave an update on the progress made by the Nigerian military in its fight against terrorism in the Northeast.

“What is left are some villages between the boundaries of Nigeria, Chad and Cameroun particularly along the Lake Chad region,” he said.

Brig. Gen. Rogers said that stability and calm have returned in Maiduguri, Damaturu, Gwoza, Bama, Baga, Monguno and other towns, adding that some buildings like schools, churches that were burnt down are being rebuilt by the military.

He, however, noted that there are some challenges along the line.

According to the Brig. Gen, in continuing the fight against the insurgents and protecting the towns that have been liberated, other security agencies are yet to get fully involved and this situation has been preventing the military from carrying out their full operations.

Brig. Gen. Rogers also disclosed that several meetings have been held and is still ongoing to discuss the challenges in the force but noted that the responses have been slow. 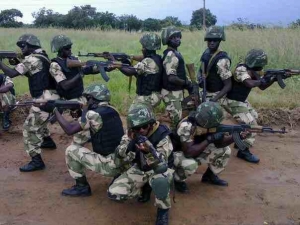 The Nigerian Army has reiterated its commitment to boosting the morale of its officers who have been at the forefront of the fight against terrorism in the country.

The Chief of Civil and Military Affairs, Major General Donald Orji, made the observation at a news conference ahead of the Army Day celebration.

Major General Orji said this year’s Army Day event would take place in Maiduguri, Borno State, north-east Nigeria, to reassure the troops and people in the region of their resolve to end the insurgency.

He also revealed that salaries and allowances of troops had been paid, to ensure that they put in their best in ending the war against Boko Haram.

Meanwhile, the Army Headquarters had presented cheques to 62 next of kin of soldiers and officers of the army who died in the ongoing counter-terrorism operations in the north-east.

The Chief of Army Administration, Major General Adamu Baba Abubakar, said the gesture was a sign of appreciation for their fallen colleagues and the support from their families while in service.

However, the military had recorded a number of achievements in the last few months which include the rescue of 200 girls and 93 women held hostage in Sambisa forest by members of the terrorist group and the 234 abductees rescued through the Kawuri and Konduga end of the stronghold of the Boko Haram.