Anambra State Governor, Willie Obiano, has suspended payment of numerous minor taxes in the state, announcing that the directive will take immediate effect.

In a broadcast at the Governor’s Lodge in Amawbia, southeast Nigeria, he said the decision followed the announcement of the Federal Government that the nation’s economy had gone into recession.

The Governor noted that his administration was aware of the difficulty the economic crisis had posed to the people of the state.

He said the state government had come up with a “four-intervention stimulus package”, to ease the pain of recession and its impact on the people in the grassroots majorly.

Governor Obiano identified the first part of the four key areas of intervention as the “Tax Relief Programme” in which various minor taxes would be suspended.

The second is the “Special Intervention Programmes for Small and Medium Enterprises and Large Enterprises” where the state government, under the Anambra Small Business Agency (ASBA), would provide the agency with a minimum of three billion Naira to lend to SMEs and MSMEs at nine per cent interest rates across key sectors.

Under the third intervention, which is the “Social Intervention Programme”, the government would provide the sum of 3.6 billion Naira to fund the ongoing 20 million Naira “Choose-Your-Project Community Programme” in all the 179 communities in the state.

The last programme is the “Infrastructure Intervention for Job Creation” in which the government would fund the development of 500 hectares of land in all agrarian communities across the three senatorial zones for commercial agricultural purposes among other measures.

Governor Obiano believes that Anambra State has the manpower, the material resources and the willpower to turn the looming despair and suffering to hope and prosperity for its people.

Nigeria’s economic recession had become obvious few weeks ago, after a report by the National Bureau of Statistics showed that the Gross Domestic Product had contracted by 2.06% in the second quarter of 2016.

Earlier on Tuesday, the Monetary Policy Committee (MPC) of the Central Bank of Nigeria (CBN) retained all key indicators.

The committee agreed to keep the Monetary Policy Rate at 14 percent, the Cash Reserve Ratio at 22.50 percent and the Liquidity Ratio at 30 percent. 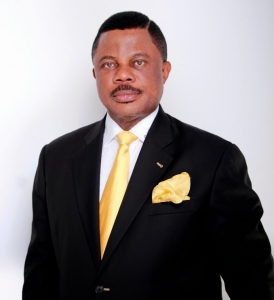 The Governor also secured two billion Naira development fund from the Central Bank of Nigeria (CBN) through a Memorandum of Understanding, under the Irrevocable Standing Payment Order (ISPO) for lending through ASBA to eligible Micro, Small and Medium Enterprises (MSME).

During the inauguration of ASBA and the distribution of the money to eligible beneficiaries, Governor Obiano said that MSMEs constitute the major drivers of his vision to engender aggressive economic growth that will touch the lives of average citizens of the state positively.

The ASBA was said to have become imperative in compliance with the CBN directive to ensure effective implementation and recovery of funds disbursed to beneficiaries.

He also said that the programme would increase the state’s Gross Domestic Product, as well as create employment and wealth opportunities for the people.

On distributing the money, Obiano urged the beneficiaries to properly utilize the funds and repay them when it is due, to ensure continuity in the programme.

The Head of Development Finance Department of the CBN, Mrs. Uzo Nwankwo, commended the state for being among the few that have accessed the fund. She noted that the joy of giving out the fund will be complete, if the reason for its disbursement is achieved.

For the Managing Director of ASBA, Mr. Clement Chukwuka, ASBA is the state’s special purpose vehicle for assessing the MSMEs fund. He gave an assurance of the commitment of the agency in all aspects to see to the success of the venture.