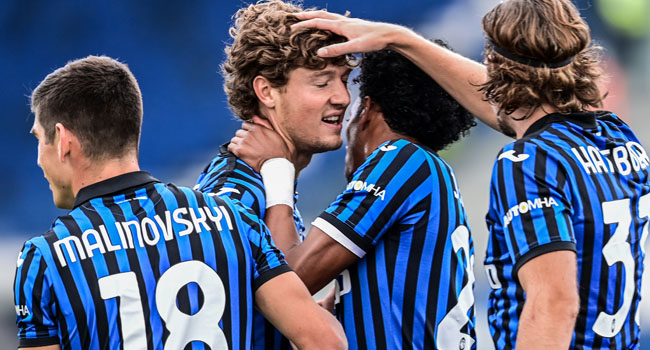 Papu Gomez extended his scoring streak as Atalanta crushed Cagliari 5-2 for a third consecutive win this season, but champions Juventus’s clash against Napoli later Sunday remains in doubt after coronavirus cases at both clubs.

Atalanta struck hard in their first home game this season in Bergamo, bringing their tally to 13 goals in three games played, to sit top of the Serie A table.

“This team is going through an excellent period,” said coach Gian Piero Gasperini.

“They did not suffer much, the goalkeeper was not very busy. The score could have been much bigger.

“We’ve given the maximum in three games, now there is the (international) break that interrupts this momentum.

“After that we will immediately have Napoli and then the Champions League, we have to pick up where we left off.”

Gasperini’s side were four goals up at the break with Luis Muriel opening after seven minute.

Gomez blasted in the second from a distance just before the half-hour mark, five minutes after Uruguayan defender Diego Godin had pulled Cagliari level on his debut since moving from Inter Milan.

Mario Pasalic and Duvan Zapata also scored in a five-minute spell before the break.

Joao Pedro reduced the deficit for the Sardinians after the break but Sam Lammers marked his first home game with an impressive solo effort with nine minutes to go.

Atalanta have the maximum nine points, but can be joined by Inter Milan who play Lazio later, with Hellas Verona and AC Milan also looking for their third wins against Parma and La Spezia.

Napoli are also looking for a third straight win, against nine-time holders Juventus, who have four points from two games.

But their match remains uncertain with Gennaro Gattuso’s side remaining in Naples, complying with a decision by regional health authorities.

Both Napoli and Atalanta announced new cases among their players on Saturday.

Gennaro Gattuso’s side now count midfielder Eljif Elmas among those with the virus after Poland international Piotr Zielinski on Friday.

Atalanta said their unnamed player had “a low viral load” and was “asymptomatic”.

Juventus confirmed they would “take to the field” as scheduled despite two positive tests among their staff with coach Andrea Pirlo naming his match-day squad.

The Lega Serie A confirmed that the match between the title rivals remains scheduled for Turin at 1845 GMT despite Napoli remaining at home in Naples.

If Napoli do not play Gattuso’s side would forfeit the game 3-0.

The Lega Serie A are applying UEFA rules whereby a match can take place as long as a side have 13 healthy players, including a goalkeeper.

The only possible exemption would be a club which has an active outbreak of Covid-19 with more than ten new positive cases in a week.

In this case, the club can request a postponement, but only once in the season.

Genoa’s game against Torino on Saturday was postponed with the Ligurian club, who lost 6-0 to Napoli last weekend, now counting 22 cases, including 17 players.