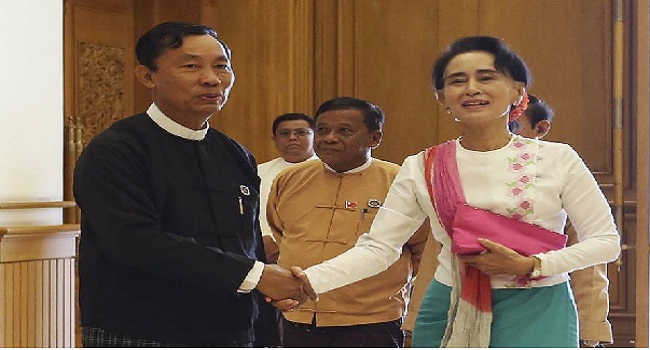 Both men have pledged to assist in a smooth transfer of power after decades of military-backed rule.

Mrs Suu Kyi is constitutionally barred from becoming president, but has said she would be above the person she nominates for the role.

A spokesman for Mr Sein said the discussion with Mrs Suu Kyi lasted 45 minutes and focused on how to achieve a peaceful transition of power.

The army ruled Myanmar from 1962 until 2011, when a military-backed civilian government came into power led by Sein and ushered in a series of reforms. 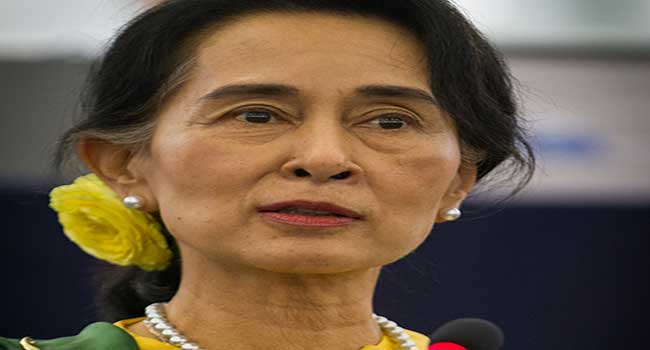 With over 80% of seats declared, Aung San Suu Kyi’s party has more than the two-thirds it needs to control parliament and choose the president, ending decades of military-backed rule.

But a quarter of seats were given uncontested to the military, meaning it remains hugely influential.

Ms Suu Kyi cannot become President because the constitution specifically bars anyone whose children were born foreign nationals from holding the job as both her sons were born British.

However, the Nobel peace prize laureate who spent decades under military-imposed house arrest, insisted she would lead the country anyway should her party win.

The election was seen as the first openly contested poll in Myanmar in 25 years. 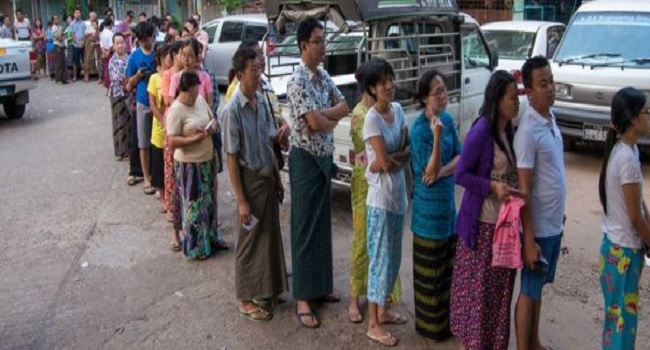 Myanmar’s National League for Democracy (NLD) says it is poised for victory as the country awaits results of the first openly contested national election in 25 years.

An NLD leader, Aung San Suu Kyi, has hinted at victory saying: “I think you all have the idea of the results”.

The Military-backed Union Solidarity Development Party (USDP) has been in power since 2011.

If the NLD wins two-thirds of the contested parliamentary seats, it will end decades of military control.

The full results will not be known for at least a few days, and the President will only be chosen in February or possibly later.

In a pre-election speech on Friday, President Sein stressed the government’s commitment to ensuring a credible vote, with more than 10,000 observers scrutinising the process, in which 91 parties partook. 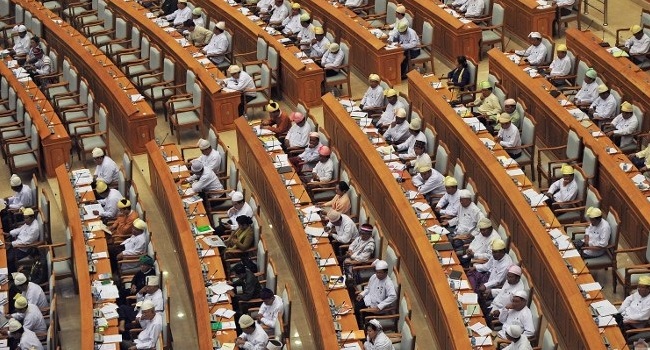 The parliament in Myanmar has voted to retain the army’s veto over constitutional change, dealing a blow to Aung San Suu Kyi’s hopes of running for the presidency.

Myanmar is a country with over 100 ethnic groups which has Naypyidaw as its capital. It was formerly called Burma and located in South-east Asia bordering India, Bangladesh, China, Laos and Thailand.

The bill received a majority of Myanmar’s Parliament (MP) votes but not the 75% needed to pass.

Ms Suu Kyi’s National League for Democracy (NLD) was expected to see big gains against the ruling party in an election likely to take place in the autumn.

The NLD swept the last free general election in 1990, but the then-ruling military junta ignored the results.

MP continued to be dominated by the army and former generals despite dramatic reforms in 2011 that ended outright military rule. 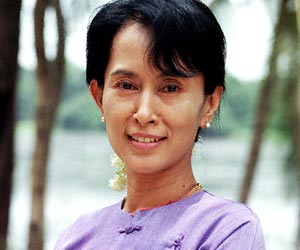 Ms Suu Kyi’s opposition National League for Democracy (NLD) said she had easily won the vote in Kawhmu, though official counts have not yet finished.

The NLD was competing in its first elections since 1990.

The vote is a key test of promised political reforms, though the military-backed ruling party remains dominant.

During the campaign, foreign journalists and international observers were given the widest access for years.

The European Union hinted that it could ease some sanctions if the vote went smoothly.

“We hope the whole day can be run in a peaceful way and we’ll make an evaluation later on the basis of all the polling sessions that we will be seeing,” EU observer Ivo Belet said.

A NLD spokesman told AFP news agency he had sent a letter of complaint to the election commission over allegations ballot forms had been tampered with.

Nyan Win said there had been complaints that wax had been put over the check box for the party, which could later be rubbed off to cancel the vote.

“This is happening around the country. The election commission is responsible for what is occurring,” he said.

Burma’s current government is still dominated by military and ex-military figures from the old regime that ruled the country for decades and was accused of widespread rights abuses.

But since 2010, when a transition to a new generation of leaders began, the government has impressed observers with the pace of change.

Most political prisoners have been freed, media restrictions have been relaxed and, crucially, Ms Aung San Suu Kyi and the NLD have been persuaded to rejoin the political process.

They have taken no part in Burma’s political process since 1990, when the NLD won a landslide victory in a general election but the military refused to accept the result.

Ms Aung San Suu Kyi spent much of the following 20 years under house arrest and refused to take part in the 2010 election, which ushered in the current reforms.

The NLD is one of 17 opposition parties taking part in Sunday’s election. Only a fraction of seats are up for grabs and the military-backed party will still dominate.

Ms Aung San Suu Kyi, 66, was standing for a lower house seat in the Kawhmu Township constituency, outside Rangoon.

On Sunday, she visited polling stations in Kawhmu before heading back to Rangoon.

Earlier, Ms Aung San Suu Kyi described this year’s election campaign as not ”genuinely free and fair” and warned that reforms were “not irreversible”.

But she said she and the NLD did not regret taking part.

“Still we are determined to go forward because this is what our people want,” she said.

A small number of representatives from the Association of South-East Asian Nations (Asean), along with the EU and US, have been invited to observe polling.

More than 100 foreign journalists are believed to have received permission to cover the vote.