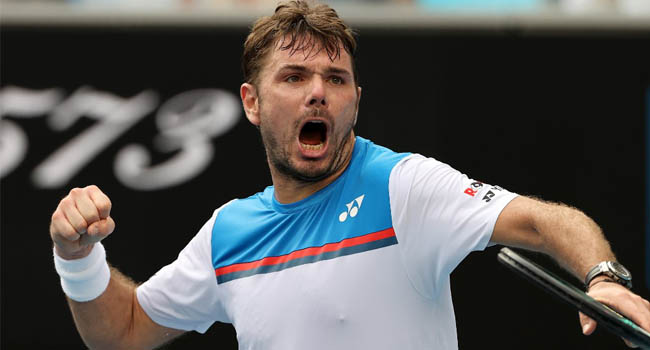 It set up a last-eight clash with either Russian 17th seed Andrey Rublev or German seventh seed Alexander Zverev.

“Another amazing match,” said Wawrinka, who is into his 18th Grand Slam quarter-final, behind only Roger Federer, Rafael Nadal, Novak Djokovic, and Andy Murray among active players.

“The level was super-high and the atmosphere is so special here in Australia.

“It’s amazing to still be playing and at that level. I’m really happy with what I’m doing on the court.”

Three-time Grand Slam champion Wawrinka has not won a title since pocketing the 16th of his career on the Geneva clay in 2017, with two bouts of surgery on his left knee pushing him to the brink of retirement.

A lengthy absence from the tour meant his world ranking plunged, but he has climbed back to world number 15 after runs last year to the last eight at Roland Garros and the US Open.

Beating Medvedev brought up another milestone in Wawrinka’s illustrious career — it was his 300th Tour-level win.

It was classic Wawrinka in the first set, with the 34-year-old playing some of his best tennis in a long time.

He broke to go 3-1 in front and then again to take the set in 32 minutes of precision and power, with the Russian struggling to match him around the court.

But Medvedev came roaring back to break and take a 3-1 lead in the second set as Wawrinka lost his range, breaking again to take the set in emphatic fashion.

The 23-year-old built on his advantage early in the third set, with his serve making life hard for Wawrinka who struggled to create chances and had trouble applying the finishing touch at the net.

In contrast, Medvedev was hitting winners and broke for 4-3 before sealing the set.

They traded blows in a tight fourth set, desperately arm-wrestling for the edge with a tiebreaker needed and Wawrinka showing his experience to prevail and send it to a deciding set, where the writing was on the wall.

Medvedev had played five career five-setters and lost them all, while veteran Wawrinka had 50 under his belt and a 28-22 record.

He turned the screws, breaking the Russian’s opening service game then staving off three break points to go 3-1 in front, with no way back for the fourth seed. 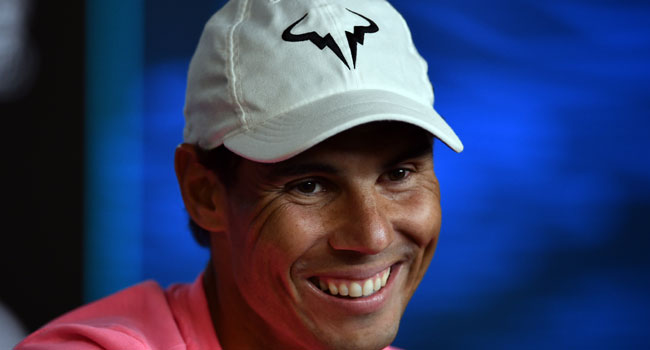 Rafael Nadal said passion and positivity had helped him reach an unprecedented third decade ranked world number one, after defying the ravages of injury and the critics who said his all-action game was too tough on his body.

Despite a steady stream of foot, knee, back, arm, hand and wrist injury setbacks, the 33-year-old has returned time and again to become the only player to top the rankings in three different decades.

“I can’t say I have been lucky with injuries, because I have not,” the Spaniard said on Saturday, when asked about his longevity in the game.

“But there is no secret, no? There is only about passion, about love for the game, and about being able to stay positive in the tough moments.”

Nadal’s physical, uncompromising approach is often contrasted with his great rival Roger Federer, who appears more effortless on court and — after far fewer injuries — is still going strong at 38.

But the fighting qualities that have taken Nadal to 19 Grand Slam titles on court have often been evident off it, as he was repeatedly able to recover from injury and return to the top.

“It’s true that I went through some tough situations during all my career. But I was able to always, with probably the positive attitude and with the right people around — they were the key — I was able to find a way to keep going, no?” he said.

“It’s difficult for me to imagine because for my style of game, as a lot of people said, my career should be little bit shorter. But here we are. Happy for that.

“Even for me is a big surprise to be where I am at my age.” 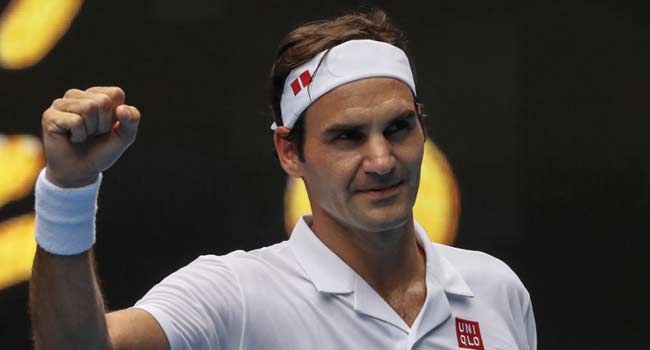 Defending champion Roger Federer reached the Australian Open third round for a 20th straight year Wednesday but was made to battle hard by Britain’s Dan Evans before winning 7-6 (7/5), 7-6 (7/3), 6-3.

The ageless 20-time Grand Slam champion, who is gunning for a record seventh Melbourne Park title and third in a row, had breezed past Denis Istomin in the first round but was given a much tougher examination by the world number 189.

“I think if I could have pulled away early in the match it might have been different,” said the 37-year-old Swiss master who needed 2hr 35min to get past his 28-year-old opponent.

Evans, whose ranking plummeted from a career-high 41 after he was slapped with a year-long ban for testing positive to cocaine in April 2017, played almost flawless tennis to stave off a set point on his way to forcing a first set tie-break.

He even had the temerity to lead 5-3 in the breaker before Federer stepped up a gear and reeled off the next four points with a cry of “Come on!” as he secured a hard-fought opening set after exactly one hour.

It was harsh on Evans who had committed only two unforced errors and constantly put the third seed under pressure with his scampering, attacking game and flurry of winners off both wings.

The plucky Evans, who had covered acres of ground and found the lines brilliantly, needed treatment for blisters on both feet before the second set started and immediately was broken.

But he refused to lie down and broke back as Federer served for the set to force another tie-break.

“I thought I might have pulled away midway through the second set,” added Federer. “But I couldn’t, to his credit. He played well.”

The Swiss star hasn’t often needed luck during his unparalleled career but he took advantage of some in the third set to finally ease the pressure.

Holding breakpoint at 2-1, he barely scooped up a half-volley which grabbed the net cord and toppled over forcing Evans to go long.

A service game to love followed to put Federer 4-1 up and the brave resistance of Evans was finally broken.

The veteran will next play either France’s Gael Monfils, seeded 30, or American Taylor Fritz in the last 32. 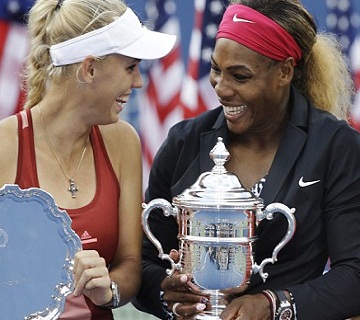 Williams eased past Wozniacki 6-3 6-3 to move up in the record book with her 18th grand slam title.

It was the third consecutive and sixth overall U.S. Open crown for the 32-year-old American as well as her 18 career grand slams putting her alongside Chris Evert and Martina Navratilova for fourth place on the all-time list.

After a poor start from both players, Williams steadied herself to take the first set and found something approaching her best form to dominate the second.

Failing to get beyond the last 16 of the year’s first three slams, the top seed sailed through the U.S. Open without dropping a set, finishing off Woznaicki in 75 minutes.

“It was a really wonderful feeling,” said Williams, who was joined by Navratilova and Evert for the trophy presentation, when she also collected US$4m in prize money.

“I couldn’t have finished things in a better way. It is a pleasure for me to win here, I am really emotional. I couldn’t ask to do it at a better place.”

The emotion for Williams was clear during the on-court ceremony as she struggled to hold back tears before being presented with an 18-carat gold Tiffany bracelet by Navratilova and Evert to mark her achievement.

“It means a lot to me,” she said. “I just could never have imagined that I would be mentioned with Chris Evert or with Martina Navratilova, because I was just a kid with a dream and a racket.

“Living in Compton, this never happened before. And then it was eluding me for three tournaments. That’s a lot for me. I was really excited to get it. It was definitely (weighing) on my shoulders.”

“I definitely did not think I was going to win a Slam this year,” she added. “And I even said, ‘I’m ready to start next year already. Let’s put this behind me.’

“I’m grateful to win a Grand Slam this year. It feels really good.”

There was no joy, however, for Wozniacki.

Back in a grand slam final for the first time in five years, it was another frustrating end to a promising fortnight for the 10th seed as she once again left Flushing Meadows empty-handed, a major championship just beyond her grasp.

The Dane had hoped she would be more ready for the occasion five years after her first slam final, when she lost to Kim Clijsters, but she was comprehensively second best to her close friend, Serena.

“I don’t believe that talent can beat everything,” said Wozniacki, who leaned on Williams for support after golfer, Rory McIlroy, broke off their engagement just before the French Open.

“When she’s on her game it’s not fun to play her,” said Wozniacki, whose only other grand slam finals appearance also came at Flushing Meadows in 2009. “She’s so strong. She has a good serve and she puts pressure on you straight away.

“When she needs to she can pull out that big serve. She has the power. She can push us back on the court and take the initiative. 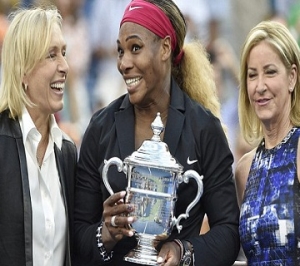 “She definitely has the experience now, as well. I think that makes it even harder, because maybe back in the day she might have made not the right choices.

“Now she knows what she needs to do out there, and it makes it even harder to beat her.”

Wozniacki insisted the pair’s friendship did not affect the match and hailed Williams’s phenomenal achievements.

“When you’re out there, we’re both competitors and we both want to win, so we’re both going to do anything possible to win the match,” said Wozniacki.

“After the match, we’re friends again. It’s tennis. It’s a game. But off the court we still care equally as much about each other.

“I think her results and her career says it all: 18 grand slam titles. You don’t get that unless you’re exceptional in what you do. She is one of the greatest of all time. To have 18 grand slam titles and still be the person she is is really something very rare.”

It has been a tough season for Williams by her sky-high standards, the American failing to make it past the fourth round at any of the first three slams.

The world No1 moved to within one of the pair at Flushing Meadows 12 months ago but faltered surprisingly three times trying to get there.

At the Australian Open, French Open and Wimbledon, she did not make it past the fourth round, and when she was whisked away from the All England Club in June after her bizarre doubles display, a US Open title looked a long way away.

Both Navratilova and Evert won their 18 titles over the course of 12 years, and Williams’s longevity is something that John McEnroe, a four-time US Open winner, believes makes her the best ever.