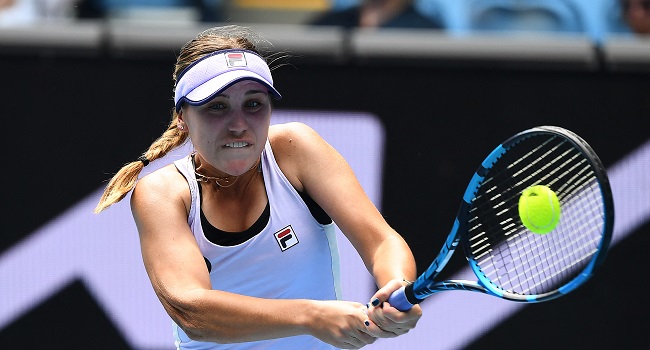 The highly-strung Kenin has struggled to handle expectations in her maiden Grand Slam title defence and admitted to having a few tears during a tense opening-round win on Tuesday.

The fourth seed shed more on Margaret Court Arena Thursday after her 6-3, 6-2 defeat in 64 minutes to the Estonian world number 65, becoming the highest-ranked player to go out of the tournament.

Meanwhile world number one Barty cast friendship aside with a straight-sets victory over compatriot Daria Gavrilova, but appeared to lose focus serving for the match before closing out for a 6-1, 7-6 (9/7) win against her Fed Cup teammate.

Barty’s left thigh was heavily strapped but she seemed to move with ease in the second-round encounter against 387th-ranked Gavrilova.

“This isn’t very subtle,” Barty said referring to the bandage. “I’m as fit as a fiddle.

“When you play another Aussie, rankings go out of the window, so it was always going to be a tricky match.”

Later Thursday, Rafael Nadal will test his sore back again as he chases a record 21st Grand Slam crown.

The ailing Spanish second seed had to modify his service action during a straight-sets cruise past Serbia’s Laslo Djere in the first round.

He will round off the night session on Rod Laver Arena against American qualifier Michael Mmoh, having never lost a match at the Australian Open to a player ranked as low as the world number 177.

“My back is not perfect. Every day that I’m able to go through, probably there are more chances to be better,” said Nadal, who also pulled out of the ATP Cup last week.

Before that match. teenage sensation Coco Gauff is looking for her latest big-name scalp in the prime-time evening slot on Rod Laver Arena.

The potential victim this time is Ukrainian fifth seed Elina Svitolina, who will be all too aware that Gauff knocked out Venus Williams and Naomi Osaka on her way to the fourth round a year ago aged 15. 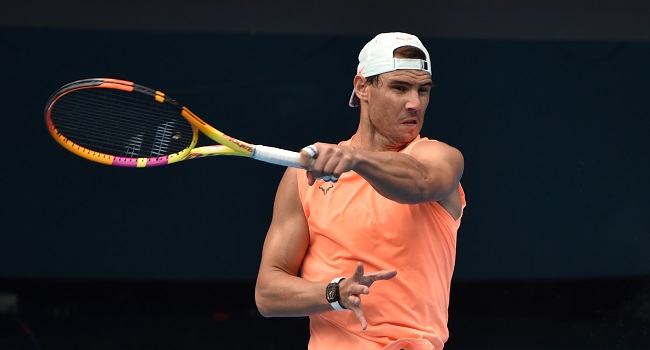 Preparations for the Australian Open were thrown into chaos Wednesday when up to 600 players and officials were told to isolate and get tested after a hotel staff member tested positive for coronavirus.

Daniel Andrews, premier of Victoria state, said a worker at a hotel the players and officials are staying in became infected with Covid-19.

The man last worked at the Grand Hyatt in Melbourne on January 29 and anyone there was considered a casual contact.

All play on Thursday at five ATP and WTA warm-up tournaments as well as the ATP Cup event featuring the world’s top players in Melbourne has been cancelled as a precaution.

“There will be no matches at Melbourne Park on Thursday. An update on the schedule for Friday will be announced later today,” the Australian Open said on its Twitter account.

More than 1,000 players, coaches and officials jetted into largely virus-free Australia last month for 14 days’ lockdown ahead of the opening Grand Slam of the year.

The Grand Hyatt was one of the designated hotels used.

In a late-night press conference, Andrews said: “There is a number of about 500, 600 people who are players and officials and others who are casual contacts.

“They will be isolating until they get a negative test and that work will be done tomorrow.”

But with test results generally returned within 24 hours, he said he did not expect the precautionary move to affect Monday’s scheduled start of the Australian Open, the first Grand Slam tournament of the year.

“At this stage, there’s no impact to the tournament proper,” Andrews told reporters.

The six preparatory tournaments are currently being held at Melbourne Park to get players match fit after their fortnight in quarantine.

While most players were allowed out to train for five-hour blocks during their lockdown, 72 were confined to their hotel rooms 24 hours a day after eight positive Covid-19 cases were detected on the charter flights that brought them to Australia.

Some players only emerged from the strict lockdown over the weekend.

Aggressive restrictions on incoming travel have helped keep the coronavirus at bay in Australia, making it one of the countries still able to have spectators at sports events.

Despite the huge logistical exercise of holding a major tennis tournament during a pandemic, Andrews said sport was not the most important issue.

“I must say that is important to us but the issues are much broader and that is about public health and public safety,” he said, but added: “This is one case, there’s no need for people to panic.”

Health officials said the man was tested at the end of his shift, returning a negative result. He subsequently developed symptoms and was tested again on February 2, with his result coming back positive late Wednesday.

Victoria had gone 28 days without a locally acquired infection. The new case prompted a tightening of rules around mandatory mask wearing and a reduction in the limits of how many visitors are allowed in homes.

Daily crowds of between 25,000 and 30,000 are expected to be allowed to watch the Australian Open, equating to some 390,000 spectators across the two-week spectacle — around half the attendance of last year. 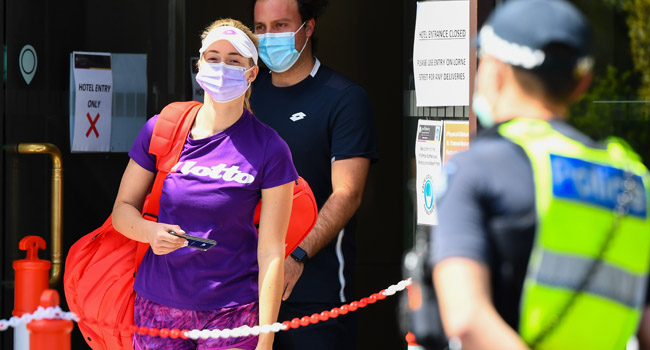 Australian Open chief Craig Tiley insisted Sunday the Grand Slam would begin as scheduled next month, while admitting it was “not a great situation” for the 47 players who have been confined to their hotel rooms.

The tournament was thrown into disarray on Saturday when three people tested positive to Covid-19 on two of the 17 charter flights bringing players and their entourages to Melbourne and Adelaide.

A fourth person, a member of a broadcast team on one of the same flights, from Los Angeles, tested positive Sunday.

None were players, although one was Sylvain Bruneau, coach of Canada’s 2019 US Open winner Bianca Andreescu. Another was also a coach, although they were not identified.

Everyone on board was considered to be close contacts and ordered not to leave their hotel rooms for the 14-day mandatory quarantine period.

It means 47 players will not be allowed out to train for five hours a day as previously agreed in the build-up to the opening Grand Slam of the year, which is due to start on February 8.

The likes of Victoria Azarenka, Sloane Stephens, Kei Nishikori and Angelique Kerber are believed to among those affected, badly impacting their preparations.

“We always knew there would be significant risk with this pandemic, you can never tell,” Tiley told Channel Nine television.

“But the Australian Open is going ahead and we will continue to do the best we possibly can to ensure those players that have what is not a great situation, one that is somewhat acceptable.”

Organisers quashed rumours about a positive case on one of the two flights to Adelaide carrying some of the game’s biggest names.

While most players touched down in Melbourne, superstars including Novak Djokovic, Rafael Nadal, Serena Williams and Naomi Osaka instead flew into the South Australian city.

– Risks made clear –
Several players, including Sorana Cirstea and Belinda Bencic, took to social media to complain about not being able to train, with some claiming they were not told about a hard lockdown if one person tested positive.

“If they would have told us this rule before i would not play Australia,” tweeted Romania’s Cirstea, and Kazakhstan’s Yulia Putintseva agreed: “I would think twice before coming here,” she said.

Tiley admitted it was hard, but said they were made aware of the risks.

“We did make it very clear at the beginning, that’s why we had the player groups in cohorts, there was always a risk that someone would be positive and have to go into 14 days of isolation,” he said.

Some players have already breached the strict lockdown rules by opening their doors.

Victoria state Covid-19 quarantine commissioner Emma Cassar warned they faced fines of up to Aus$20,000 (US$15,300) and persistent offenders risked being sent to another hotel with a police officer stationed outside their door.

She cited one player “who opened his door to try and have a conversation with his training mate down the hallway”, while another bought takeaway food for friends on the same floor “and was praising his great efforts and opened his door to do so”.

“It is really low-level but really dangerous acts which we just can’t tolerate,” Cassar said.

Tiley said he was doing what he could to ensure affected players had exercise equipment in their rooms.

But he acknowledged they would struggle to be ready for a week of lead-in tournaments to start in Melbourne from January 31.

Asked if the 47 players would miss those events, he replied: “They have not been ruled out. Obviously at this point, they are not going to get on-court preparation.

“If we have to make some adjustments to the schedule we will do whatever we can to make it an environment that is best for the players.”

The Australian Open had already been hit by the withdrawal of injured Roger Federer, while world number 16 Madison Keys and three-time major winner Andy Murray both tested positive for the virus before departure so did not board their flights to Australia.