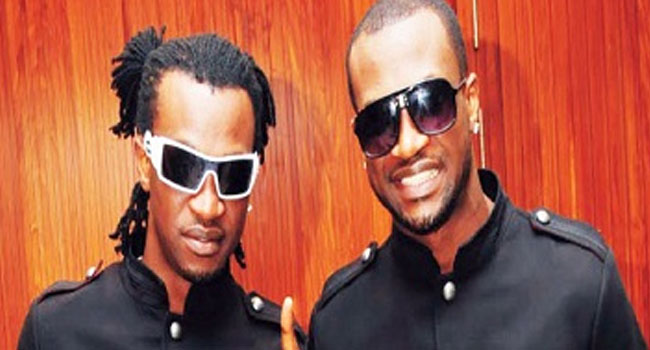 Singer Baba Dee has sued for peace between estranged musicians, P-Square, urging the duo to reconcile as he ended the feud between Tubaba and Blackface.

Dare Fasasi made the call on Saturday during a tribute in honour of the late Sound Sultan. He told Paul and Peter Okoye to reconcile as a mark of respect to Sound Sultan whom he described as a man of peace who would have loved them to make peace.

“I beg you, I beg you in the name of your father and your mother, and Jude as well. I beg you guys, you all need to come together and bury this because the time is limited,” Baba Dee pleaded, noting that Sound Sultan introduced him to P-Square, and made him fall in love with their songs.

Paul and Peter Okoye – twin brothers – went their separate ways over some family and business issues.

On the night, Baba Dee also reminded Tubaba and Blackface, members of the defunct Plantashun Boiz, of how they started.

The group performed one of their hit songs in the memorial concert, leaving the audience stunned and craving for more.

Plantashun Boiz, a hip-hop group, rocked the Nigerian music scene in the 1990s. It consisted of 2face Idibia now 2Baba, Faze, and Blackface, and was formed during their student days at the Institute of Management and Technology (IMT) in Enugu State. Upcoming rap artiste, Creddy F has released the video for his song titled, Scooby Scooby, which was initially released in 2012 and featured popular act, LKT (Alaye).

Crescent Patrick Nwanagu,  who is also known as Creddy F is now back with the video directed by one of Nigeria’s ace music video directors, Patrick Elis.

One of Nigeria’s Kings of highlife music Ebenezer Obey Fabiyi has been appointed as the Chairman of the newly formed Copyright Society of Nigeria (COSON) Advisory Board.

Alongside on the board are music icons that have made a formidable impact in the industry, Victor Uwaifo, Dan Maraya Jos, Onyeka Onwenu, Laolu Akins, Sunny Neji, Toju Ejueyitchie, Ben Ofoeze, Ossy Affason and Dayo Ogunyemi.

According to the newly appointed chairman of COSON Tony Okoroji, “Copyright administration is such a complex undertaking that requires all meaningful contributions.

“Since the board cannot accommodate more than the stipulated number of eleven members, the board has deemed it proper to set up an Advisory Council which will be made up of seasoned minds and achievers from within and outside the society; whom we believe have the right intellect to inject ideas that should help the board take COSON to our dream of being the Number one in Africa. I wish to state here that we are still building the Advisory Council as more hands will be invited to come on board and I believe in no time, members of COSON will be singing a new song.”

The association also added some of the young talented music icons as part of their executives such as R&B singer Banky W, Azeezat , Baba Dee, Fuji musician Adewale Ayuba and Audu Maikori.

One of the newly elected executives Azeezat expressed her appreciation and excitement, “This is a wonderful initiative, it gives the society an opportunity to benefit from the wealth of knowledge of people who have distinguished themselves in the music business in Nigeria, I am excited as I know this will mean well for all who have the progress of COSON at heart’,