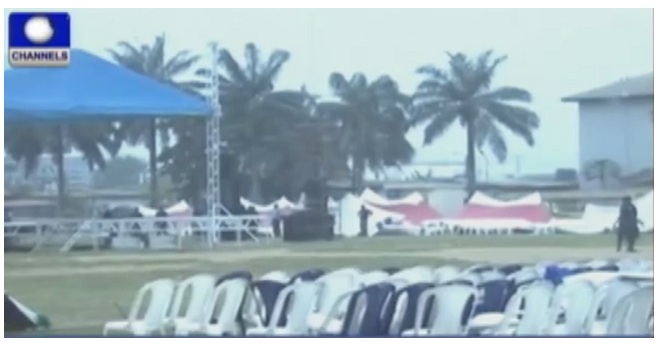 It was a tale of destruction and violence at the Save Rivers Movement Rally at Khana Local Government Area in Rivers State on Sunday.

Members were just about to begin the day’s rally when hundreds of hoodlums pounced on the conveners including Channels Television crew destroying vehicles and inflicting wounds on anyone at sight and the injured are now receiving treatment in hospital.

At the end of the mayhem, the Channels Television’s Satellite Van was damaged alongside two operational vehicles and some cameras.

The case has been reported to the Rivers State Police Command, which is investigating the incident.

This is the second time the Save Rivers Rally would be disrupted as the first rally which was to hold at the Rivers State College of Arts and Science in Rumuola, last Sunday, was raided by men of the Rivers State Police Command, who dispersed members of the group using tear-gas.

The Police Commissioner, Jospeh Mbu, who ordered last week’s raid had accused the group and its leaders of staging a political rally, which they had denied. He also said the Command had received intelligence that the event will be violent, hence the raid.

However, the President of the Save Rivers Movement, Mr Charles Aholu, who had notified the Police Command on the event prior to the event date, insisted that the association is a non-governmental organisation formed to promote good governance, transparency, accountability and judicial practices.

The group said that they had requested security from the Police for both events, the inauguration which was disrupted by the Police last week and the rally which was stormed by protesters on Sunday.