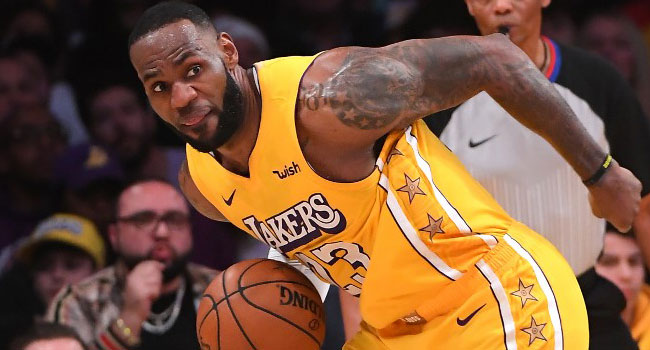 LeBron James scored a team-high 21 points and equalled his season-best of 16 assists as the Los Angeles Lakers snapped a four-game losing streak with a 128-120 win over Portland on Saturday.

“We just wanted to play well,” Jame said. “We just try to play the right way, sharing the ball on offense. Win, lose, or draw we did that tonight.”

James was a late addition to the lineup because of a groin injury that has hampered his play of late. James said treatment for the injury includes plenty of ice packs.

“I am doing all right. I am playing on it. I let the ice take care of its business,” he said.

Coach Frank Vogel said the Lakers needed to clean up the mistakes that caused them to suffer their longest losing streak of the season.

“We got a win and we are all happy about it,” he said. “We made some adjustments to things that were hurting us the last couple of games.”

Elsewhere, Kyle Lowry scored 30 points as the Toronto Raptors avenged a Christmas Day loss to Boston with a 113-97 rematch victory over the Celtics.

Serge Ibaka finished with 20 points and 10 rebounds as the Raptors snapped a two-game losing skid which included a 118-102 loss to Boston on Wednesday, as the two Eastern Conference contenders were playing for the second time in less than 72 hours.

Patrick McCaw had 18 points, seven rebounds, and eight assists, while a resurgent Fred VanVleet also scored 18 points in the win for the defending NBA champs. Lowry also had seven assists in front of the crowd of 19,100 at the Boston Garden arena.

“It didn’t sit well with me on Christmas Day,” McCaw said. “We definitely didn’t give it our best effort and I think tonight guys took it personally. It wasn’t talked about. Guys just went out and gave it their all.”

Kemba Walker scored 30 points for the Celtics, who had their five-game winning streak halted.

“We beat those guys two times already (this season), and obviously a few days ago on Christmas,” Walker said. “They definitely remembered that, of course. But those are the defending champs. They’ve got a target on their back, you know? They’re the team to beat.”

McCaw got a layup in the first quarter to give the Raptors the lead and start a quarter ending 19-8 run.

Terence Davis’ putback gave the Raptors an 89-79 lead heading into the fourth, and Ibaka’s layup with 10:11 remaining lengthened the lead to double digits for good. Toronto led by as many as 17 over the final 12 minutes.

The Raptors were playing without forwards Norman Powell (shoulder) and Pascal Siakam (groin), as well as centre Marc Gasol (hamstring).

Also, Luka Doncic tallied 31 points, 15 assists, and 12 rebounds to lead the Dallas Mavericks to a 141-121 victory over the hapless Golden State Warriors.

The triple-double was the ninth of the season for Doncic and ties the franchise record set by Jason Kidd in 1995-96. Doncic also made five three-pointers as Dallas set a franchise record by making 24 from behind the arc. The old mark of 22 took place three times.

Tim Hardaway made six three-pointers and scored 25 points and Kristaps Porzingis made four three-pointers while adding 18 points as the Mavericks won for the 15th time in the last 20 games.

D’Angelo Russell scored a game-high 35 points in the loss.

In New Orleans, Brandon Ingram scored 24 points, and a half dozen teammates also scored in double figures as the New Orleans Pelicans cruised past the Indiana Pacers 120-98.

Jrue Holiday added 20 points, JJ Redick scored 15 and E’Twaun Moore and Josh Hart came off the bench to score 11 each for the Pelicans.

Jrue, Justin, and Aaron Holiday became the first trio of brothers to play in a NBA game when Justin checked in for the Pacers with 5:13 left in the first quarter. Jrue started for New Orleans and Aaron started for Indiana.

“It was cool,” Jrue said. “What happened was Justin was about to come in and (coach) was about take me out. I told him no I was staying in just because of the moment like that.”

Due to the age difference between the brothers — Justin is 30, while Aaron is 23 — the three have never played in the same game before, even as children. 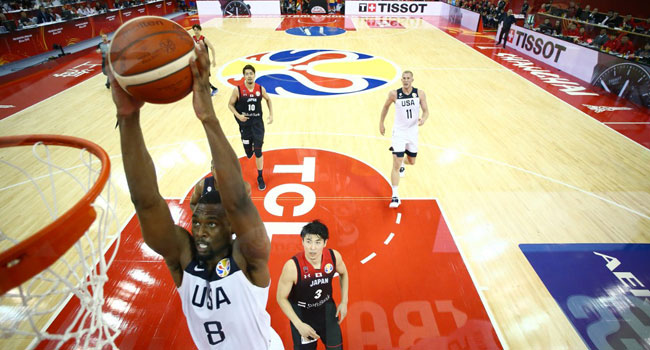 It is the largest basketball World Cup ever but there will be no teams from Asia or Africa in the second round of the sport’s global showpiece.

Hosts China with their 1.4 billion population crashed out of contention on Wednesday with a 72-59 defeat to Venezuela.

That came hours after Tunisia surrendered a spot in the next round, and a guaranteed place at the Tokyo 2020 Olympics, with an agonising 67-64 loss to Puerto Rico.

Nigeria thrashed South Korea 108-66 at the same time, but the fate of Africa’s highest-ranked team already been sealed after losing both their opening games.

The last time there was no team from Asia or Africa in the second round was in 1998, when the championship had only 16 teams.

Now it has a record 32 but it is almost exclusively teams from the Americas, led by reigning champions the United States, and Europe who will compete for the medals.

Outside of those only Australia, nominally Asian in the FIBA rankings are concerned, have also reached the second round and they could be joined by New Zealand if they beat Greece on Thursday.

Paolo Povia, coach of the Ivory Coast, said there were “a lot of factors” why African sides had failed to make their mark in China.

“There’s definitely a difference in experience and knowledge of the game,” said Povia after his team lost 80-63 to Poland on Wednesday, their third defeat in three games.

“The development of the game (in Africa) is a little inconsistent. In our team we have some guys who have learned to play the game in different places all over the world.

“So you don’t get the same continuity all the time in how the game is learned.”

Basketball is hugely popular in the Philippines but the national team — the joint-shortest at the competition — have lost all three of their matches.

They were drubbed 108-62 and 126-67 by Italy and title-contenders Serbia respectively before narrowly succumbing to already eliminated Angola on Wednesday.

Serbia’s plain-speaking coach Sasha Djordjevic said that the Philippines’ lack of physicality and athleticism “might be the problem”.

“Obviously you are missing quality,” he told a reporter from the Philippines.

After easy wins over the Philippines and Angola, Djordjevic also questioned the format of the enlarged World Cup, containing eight groups of four countries in the first phase.

“There are some groups that from the start you practically know which two teams are going to advance,” he said, shaking his head.

“I don’t know if that’s a good thing for the World Cup in general because what does it serve us?

“What does it serve the Philippine team losing by this points difference?” he said, of Serbia’s 59-point win.

Ousted teams such as the Philippines need to rally themselves, because they now face a low-key “classification” round with Olympic qualifying in play.