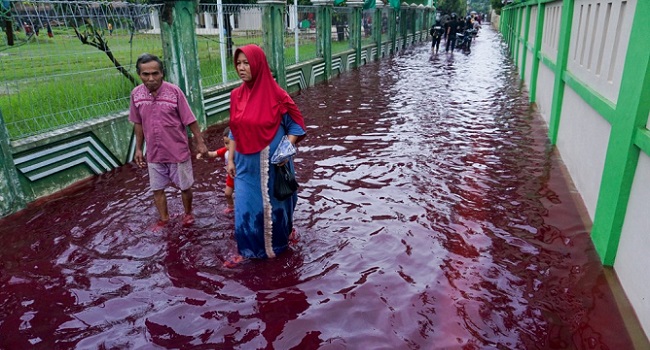 An Indonesian village was inundated by crimson-coloured water after flooding hit a fabric dyeing centre in central Java, sparking a social media frenzy.

Residents of Jenggot, near the town of Pekalongan, were seen wading through blood-red water on Saturday and many shared images of the rare phenomenon online.

Pekalongan itself is well known for its batik textiles industry, with many cottage industries flourishing across the town.

“They did not dump the dye on purpose, but several home industries were flooded and the dye packages were carried away by the water”, local disaster agency official Dimas Arga Yudha told AFP Sunday, adding that the batik dye was not toxic or dangerous.

READ ALSO: Telemedicine Takes Off In Germany During Pandemic

Local officials deployed pumps to drain the flooded area it was cleared in less than an hour.

Floods are very common across the Indonesian archipelago, especially during the rainy season.

In January at least 21 people died and more than 60,000 were evacuated after a series of major floods hit South Kalimantan.