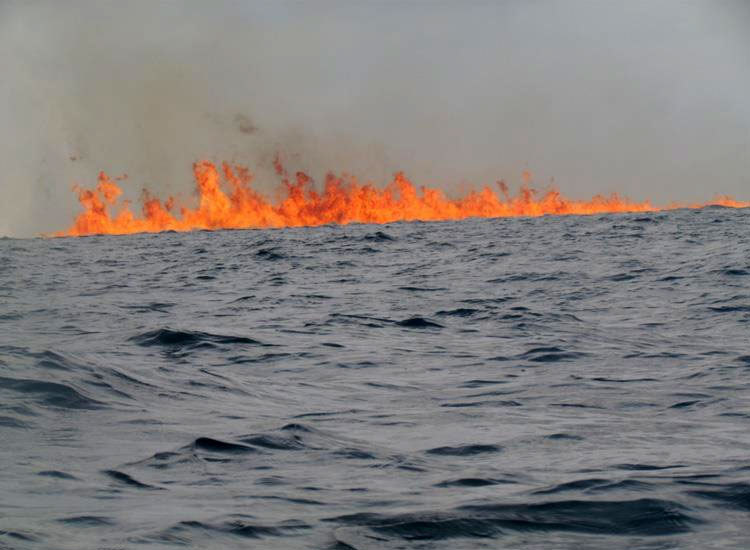 The gas-fuelled fire on Chevron’s KS Endeavour exploration oil rig that has being burning for over a month in, Bayelsa state, will burn for months, a Chevron official has confirmed.

The spokesman’s for Chevron Nigeria Limited, Lloyd Avram has revealed that, i

t is going to take months before the fire can be put out, noting that despite the fire, the situation is now under control and no oil is leaking.

He explained that “there’ll be 10,000ft of drilling and interestingly we need to hit an area that is approximately 12sq inches.” “It is going to take some time, but I cannot predict how long that is going to be – conceivably months,” Mr Avram told the BBC.

The company has been struggling to put out the fire that is burning in a 40m-wide area on the surface of the Atlantic Ocean, 10km off the coast in Bayelsa state, by piercing a hole in the original gas well – through which cement will be poured.

Hundreds of people have reportedly left Koluama town, the community just 10km away from the fire, as they are afraid to eat fish, which is crucial their diets. Demands have been made to the oil company to relocate them.

Scientific tests are currently being conducted to find out if local food and water has been contaminated by the gas in the ocean.
The National Oil Spill Detection and Response Agency (NOSDRA) had stated that the reasons for not putting out the fire since is because Funiwa field is still leaking raw gas and until the point of leakage is found and plugged; the fire wouldn’t be stopped for health and environmental reasons.

Meanwhile, the Minister of Petroleum Resources, Mrs. Diezani Alison-Madueke, who went on tour of the affected communities over the weekend, assured them that the government and the oil company are “making frantic efforts to stop the fire as soon as possible.”

President Goodluck Jonathan says he expects the best candidate to emerge as governor of bayelsa state after the todays voting exercise.

Dr. Jonathan commended Bayelsans, party officials and security agents for ensuring that the polls are being conducted peacefully.

There was generally low turnout of voters in all the polling units visited in the state, a situation that made the INEC officials to complete accreditation on time.

The president’s comments came after he casted his vote at the Otazi Playground polling centre in Otueke, Ogbia local govt area of Bayelsa state in the company of his wife.

Our correspondent in Bayelsa state Emeka Ihenacho reports that unlike the President’s polling center which had a large Crowd,a lot of eligible voters did not turn up.

He says the voter apathy may result in the conclusion of the exercise before well before p.m.

The conduct of the governorship election in Bayelsa state slated Saturday this week is now threatened by two aspirants, who have filed different Ex-parte motions order before the Federal High Court in Abuja to stop the election and include their names on the contestants list.

Kenneth Gbaliga Gbalikuma flying the flag of the African Renaissance party (ARP), through his lawyer, Kayode Ajulo, had asked Justice Donatus Okorowo to “outrightly stop the election” on the allegation that the electoral body violated some provisions of the Electoral Act 2010.

Mr Gbalikuma specifically claimed that “INEC gave only 12 days’ notice to political parties for the poll instead of the mandatory 90 days as contained in Section 30 of the Electoral Act.”

According to the plaintiffs, the Independent National Electoral Commission (INEC) cannot conduct a valid election in the face of a breach of the Electoral law. The ARP candidate in his motion asked the Court to give order for status-quo to be maintained pending the time INEC would comply with all relevant laws and guidelines on the Bayelsa election.

Justice Okorowo ruled that INEC should appear before him on Friday to “show cause on why the election should not be stopped.”

The same judge in another Ex-parte motion ordered INEC to include the name of the candidates of the African Liberation Party (ALP), Dumbo Hink and his running mate Adigio Austine Inangaebite on the contestant list for the governorship election.

Messrs Hink and Inangaebite, who claimed to have perfected their papers, sued INEC for excluding their names from the list of contestants.

Justice Okorowo held that it would be unfair for the electoral body to exclude the candidates and ordered that they must be allowed to participate in the poll.

The national chairman of the ALP, Emmanuel Osita Okeke had dragged INEC to court on behalf of his party’s candidate.

The national chairman of the All Nigeria People’s Party (ANPP), Ogbonnaya Onu has demanded the postponement of the polls to enable the party field a candidate in the election as ordered by the Court.

Mr Onu made at the party’s national executive council meeting in Abuja on Thursday said that “the Independent National Electoral Commission (INEC) must obey the ruling of the Court and give the party appropriate time to comply with the Court’s order.”

A Federal High Court had directed that the ANPP should be allowed to field its candidate in the governorship election in Bayelsa state.

Less than twenty-four hours after a Federal High Court in Abuja ordered the Independent National Electoral Commission (INEC) to restore Henry Dickson as the PDP candidate in the Bayelsa state governorship election scheduled for February this year, the party’s National Chairman has inaugurated a national campaign committee headed by the Vice President Namadi Sambo to lead the governorship campaign of the party.

Alhaji Kawu Baraje also told the party members that INEC has now listed Mr Dickson as the candidate of the party in compliance with the court order.

INEC had omitted the name of the candidate from the list of governorship candidates for the election saying the issue was still been contended in court.

But Justice Gladys Olotu granted a motion of interim injunction filed by lawyers to the PDP’s candidate demanding that Mr Dickson’s name be restored on the list as the rightful candidate of the pdp in the election.
The issue of who flies the PDP’s flag in the election has been in serious contention.

While Mr Dickson emerged the candidate through a primaries organised by the party, the state governor, Timipre Silva has gone to court insisting he is the rightful candidate even though the PDP has always maintained that Mr Dickson remains its candidate for the election.

A police man and a youth were reportedly gunned down by unknown gunmen at Ologbhobiri in southern Ijaw Local Government Area of Bayelsa state.

According to reports, the gunmen had arrived to the area via three speed boats. They attacked the residence of a popular ex-militant, Akparasia Owei, also known as General Africa, at about 11 p.m.

The gunmen fired at random and were successful in setting ablaze a part of the general’s property.

Reacting to the incident, the Bayelsa state police public relations officer, Mr. Emekpae Eguavoen, said that he has not been able to get reliable information on the incident, as his efforts to speak with the appropriate person in the area has so far been unsuccessful.

“I can confirm that the timely intervention and gallantry of JTF soldiers deployed at a nearby oil production facility saved Ologbori community from what culd have been a severe attack from unidentifed gunmen who razed down the residence of an erstwhile militant leader.

“One soldier sustained minor gunshot wounds in the firefight.”

The violence comes on the heels of twin blasts in the state capital city of Yenagoa, barely 24 hours ago. There were no recorded casualties from those attacks.

Despite the controversy surrounding the exclusion of incumbent Governor Timipre Silva from the upcoming Bayelsa gubernatorial race, the People’s Democratic Party (PDP) yesterday foreclosed a reversal of its controversial governorship primary.

The Nation reported that the party, at its National Executive Committee meeting in Abuja, endorsed the nomination of Mr. Seriake Dickson as the PDP candidate in February’s general election.

Attempts at the meeting to sway the ruling party’s decision to keep Silva off the ticket, failed, the Nation reported.

Reading the communiqué at the end of the 57th NEC meeting yesterday, Acting National Publicity Secretary Prof. Rufai Ahmed Alkali, said the party had played by the rules.

The communiqué stated that after a careful review of the party’s preparations for the primaries, the PDP believes its conduct in Kogi, Adamawa, Bayelsa and Sokoto states to be successful.

“NEC commended the National Working Committee for a thorough handling of the primaries in the affected states and urged all Party members to accept the outcome of the exercise, in the spirit of party loyalty, unity and cohesion.”

He added: “On the forthcoming congresses to elect party officials at all levels, NEC commended the enthusiasm shown by Party members nationwide, especially the smooth conclusion of the update of ward registers. NEC expressed its determination to see to the successful conclusion of the transition exercise. NEC also agreed on proposals for consultations on zoning of party offices in order to consolidate our broad based national support and carry each constituent part of the nation along. A decision on what office goes to what zone shall be communicated to members in due course.”

“NEC also dismissed speculations in some circles that plans are underway to dissolve some State Executive Committees before the expiration of their tenure. NEC affirms its commitment to provision of the party constitution on tenure of officials and urged officials concerned to disregard such rumours.”

“NEC was briefed on progress of the PDP Constitution Review Committee, led by the National Legal Adviser. The committee is still working but has made substantial progress in fashioning a new constitution, which shall be in tune with the Constitution of the Federal Republic of Nigeria and the Electoral Act. The review Committee shall present a comprehensive report in due course.”

According to the Nation, the international community is now being invited to intervene in the murky political matters of Bayelsa state.

A petition was sent to the embassies of six countries considered to have “cordial relationships” with Nigeria.

The petition titled “An urgent call for international intervention in Bayelsa State” and dated December 13, 2011 was sent to the ambassadors or the high commissioners, of the United States, Canada, the United Kingdom, France, Sweden and Switzerland.

It was signed by representatives of The Polaris Network, Ijaw Media Network, Niger Delta Democratic Initiative, Save Bayelsa Group and the Bayelsa Restoration Agenda.

In the petition, The Nation reported, the civil groups highlighted the “political tumult in Bayelsa State with its negative impact on the political development of the country, the possibility of descent into anarchy in the state, possible reversal of the political and social gains made in the state and the total implication for peace process in the Niger Delta”.

Since the political powers have thus far “defied all local attempts” to resolve it, the groups called on the international community to prevail on President Goodluck Jonathan to allow Governor Timipre Sylva contest the election in February.

They claimed the political imbroglio in the state has “defied all local attempts” to resolve it.

The groups said: “We ask that these governments should prevail on the Federal Government and President Goodluck Jonathan to obey electoral laws and respect democratic principles to enable Governor Timipre Sylva contest the election.

“The impact of this intervention by the international community will prevent a breakdown of law and order that will heat up the polity anddisrupt the peace that took the collective efforts of leaders in the Niger Delta to build in the last two years.

“We request that the international community should act timely to prevent a slide into anarchy,” the group stated.