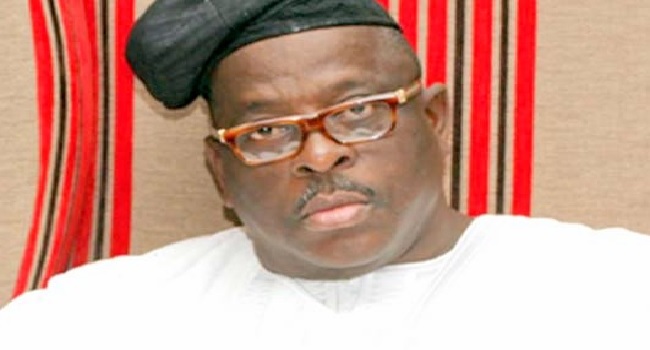 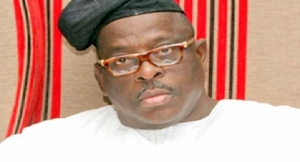 The Peoples Democratic (PDP) in Ogun state has suspended the Senator representing Ogun East senatorial district in the Senate, Buruji Kashamu and seven others, by a faction-led by Sikirulai Ogundele.

In the notice of suspension signed by Sikirulai and the secretary, Olabode Bankole, dated November 24, 2016, the party alleged that the affected persons were suspended sequel to the report of a panel which was constituted in June, 2016 to investigate allegations of financial improprieties and anti-party activities.

However, in a swift reaction, Buruji Kashamu, asides denying the allegation of any financial impropriety leveled against him, also said that no one could suspend him.

Describing Sikirulai as an “interloper”, he said he spent his financial resources on the party, arguing that he was taken aback by the allegation of financial impropriety made against him.

In a press statement signed by his media aide, Austin Oniyokor, Kashamu said, “The alleged diversion of party funds is most laughable because it is common knowledge that I use my personal funds to keep the party float even when people like ex-Governor Gbenga Daniel and Ladi Adebutu left the PDP for Peoples Party of Nigeria and then for the Labour Party, until they returned to PDP in the build up to the 2015 general elections because of campaign funds.

“It is on record that Daniel superintended over the 2015 campaign funds in Ogun State. So, which other funds could a party in opposition possibly have?”

The Ogun State chapter of the Peoples Democratic Party (PDP) said that modalities have been put in place to ensure successful ward, local government and state congresses.

This is to elect officials who will reposition the party after its dismal performance in the last general elections.

The State Chairman of the party in the state, Mr Bayo Dayo gave the hints after a meeting of party officials and supporters in Ogun State, South West Nigeria.

The meeting was one of the moves being made to bring the various factions within the party together to reposition it for victory.

The party chairman said that lessons have been learnt from the past elections and in moving forward, first in this move is the re-registration of party members from the 236 wards in the state.

This is to be followed by the subsequent ward, local government and state congresses.

Also speaking at the event, the National Auditor of the party, Fatai Adeyanju, dispelled the rumour of a rift among the party’s senior stalwarts after the emergence of its new National Chairman, Ali Modu Sheriff.

He said that the new chairman remains the best man for the job.

The National Auditor canvassed support for the new PDP Chairman, saying that the initial disagreement which trailed the appointment of the new chairman has been laid to rest.

The leadership of the Ogun State chapter of the People’s Democratic Party (PDP) has denied any planned merger with the Labour Party (LP) in the state, in the build up to the 2015 general elections

This indication was given by the chairman of the party, Mr Bayo Dayo  in Ota, Ado Odo/Ota local government area of the state while  receiving about 2000 defectors from other political parties.

Mr Dayo promised that his party will give the All Progressives Congress (APC) a run for their money, insisting that the PDP still remains the party to beat in the state and Nigeria as a whole.

Mr Dayo charged them to be committed to the ideals and principles of the party, while he handed the party’s flag and symbol to the defectors before the state executive council of the party.

The party also announced the date for registration of members.

Another controversy has embroiled the just concluded local government elections in Ogun state as the High Court in Ilaro has nullified the list of candidates presented for the poll by the People Democratic Party (PDP).

The Presiding judge, Justice Mosunmola Dipeolu in her ruling on Friday nullified the list of candidates of the Ireti Oniyide faction, which is loyal to the former President Olusegun Obasanjo.

The Ireti Oniyide faction was recognized by the state electoral body despite a Lagos High Court directive that the Bayo Dayo led faction should be recognized in the election which had the Action Congress of Nigeria (ACN) claimed a land slide victory.

The PDP won nine counsellorship seats in the election which held two weeks ago.

Ahead of the polls, two factions of the PDP laid claims to the party’s endorsement but the Ireti Oniyide faction was given the chance to contest.

Reacting to the judgment, the chairman screening committee of Ogun State Independent Electoral Commission (OGSIEC), Mutiu Agboke, said that the content and the consequential order of the court was still sketchy.

He however added that the commission would appeal the judgment if there is a need for it.

The factional chairman of the party, Bayo Dayo, expressed delight at the judgment saying it was well deserved.