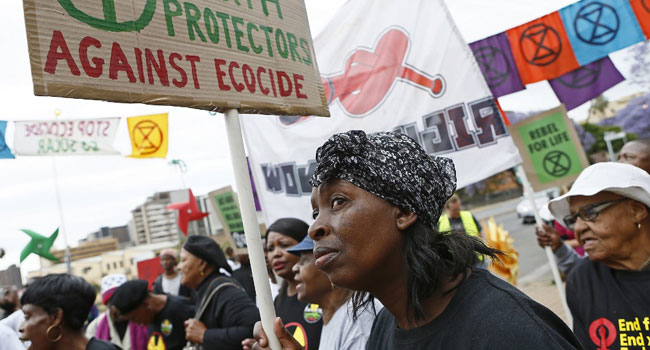 Extinction Rebellion climate protesters on Friday blocked the main entrances at the BBC’s London headquarters, with one journalist reporting that the building was on “lockdown”.

The group has carried out a wave of demonstrations in the British capital and around the world since Monday, primarily attempting to blockade city centre streets.

In the latest protest, around 50 activists set up camp in front of the main doors at the BBC’s Broadcasting House, in central London, prompting the reported shutdown.

BBC financial journalist Paul Lewis tweeted: “No one in no one out. Locked down.”

Videos of the action posted on social media showed several demonstrators had scaled an awning above the entrance and displayed the group’s flag — an hourglass symbol — on the building as staff looked on through windows from inside.

“We, the people, have decided to do your job and Tell the Truth from the BBC Broadcasting House about where we’re headed if we don’t change course,” Extinction Rebellion said in a statement on its Facebook page about the latest stunt.

“We hold you accountable for your criminal and corrupt complacency for totally marginalising the seriousness of the #PlanetaryEmergency.” A BBC spokeswoman said the news company “already covers many climate change and environmental issues across its output”.

“We know how important these issues are to audiences and will continue to focus on them across both news and non-news programmes,” she said in a statement.

The demonstration is the latest in a week of long-planned protests by Extinction Rebellion in countries around the world to highlight what it claims is the inadequate response of governments to climate change.

The protests in Britain have seen more than 1,000 people arrested since Monday.

Thursday’s actions included an attempted “Hong Kong-style occupation” of the terminal building at London City Airport in the east of the capital, with hundreds blocking the main entrance.

One demonstrator, identified by the protest group as former Paralympic cyclist James Brown, climbed on top of a British Airways jet.