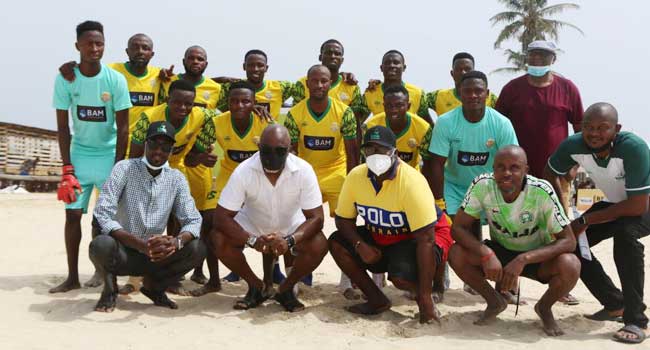 The Elegushi Beach in Nigeria’s commercial city, Lagos is bubbling with the commencement of the new Nigeria Beach Soccer League.

The League, which is the baby project of the Nigeria Football Federation, is also supported by Beach Soccer Worldwide, and Africa Beach Soccer Union.

Speaking on the sidelines after the inauguration, Mr Pinnick, who was in company with NFF 1st Vice President, Barr Seyi Akinwunmi, Nigeria Beach Soccer League Coordinator, Mahmoud Hadejia and other officials, said he was excited to be part of the historical moment, and that he was at the event despite his busy schedule, to reiterate the NFF’s endorsement, whilst also pledging his total support for the newly formed Nigeria Beach Soccer Association.

“I’m not going talk much today because I’m very excited that we are finally kicking off the Beach Soccer League in Nigeria. I’m here to officially endorse this project and to also physically express the Federation’s full backing,” he said.

“I want to appreciate everyone that made this happen because it has been a collective effort despite the many hurdles. It has been long overdue. By God’s grace, we will take beach soccer to greater heights of excellence.”

In a thrilling first-round Group A opener, Kebbi Beach Soccer Club beat Badagry United 4-2 to get their title contention underway.

Adams Taiwo set the ball rolling for them on the 8th minute when his low drive beat goalkeeper Zomoto Idowu of Badagry to give Kebbi the lead. Badagry came close to grabbing their equalizer in the closing stages of the first period through Achior Valentine but his effort went wide to end the first period 1-0 in favour of Kebbi BSC.

The Bashar Aliyu-tutored boys began the second period like they did the first, as a free-kick in the 5th minute by Badmus Faud gave them a comfortable two-goal lead. Down but not out, Badagry kept asking all the questions and were duly rewarded in the 8th minute through Akewusola Jamal. B Kebbi responded almost immediately when S. Ilimi Abubakar restored their two-goal cushion just on the stroke of the second period for 3-1.

Badagry started the 3rd period on the front foot and came close to getting their reward again through Atemo Samuel but his shot was blocked by goalkeeper Arome Isah who had a terrific day between the sticks.

The ever-vibrant Isah could however do nothing to stop Achior Valentine’s free-kick in the 10th minute as Badagry pulled one back for 3-2.

Kebbi then made sure that any hope of a comeback was off the table for Badagry as they responded almost immediately via Adams Taiwo, who bagged his brace on opening day to lead the race for the Golden Boot.

In other matches played in Group B on Sunday, Igbogbo BSC of Lagos pummeled Edo HCF 6-3, Anambra BSC were 5-3 better than Kwara BSC in Group A, and Kada BSC squeezed past the Smart City of Lagos, 5-2. 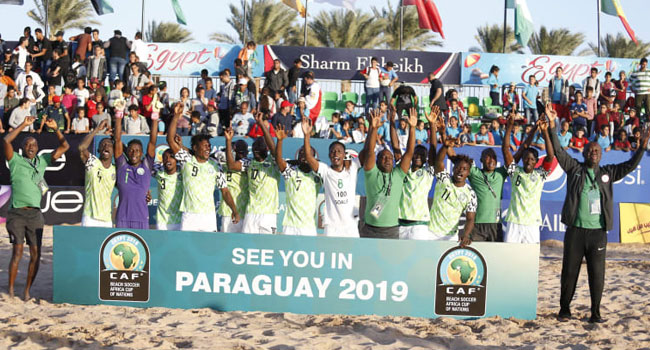 Players and officials of Nigeria’s Beach Soccer Team, the Supersand Eagles, will leave the country on Friday to Paraguay for this year’s FIFA Beach Soccer World Cup finals.

The two-time African champions picked a ticket for the 10th edition of the global event after finishing second behind Senegal at the Beach Soccer Africa Cup of Nations hosted by Egypt in December last year.

This year’s tournament is scheduled for 21st November – 1st December in Asuncion, capital of Paraguay. Match venue is the ‘Los Pynandi’ World Cup Stadium, named after the Paraguayan national beach soccer team and located at the headquarters of the Paraguayan Olympic Committee in Greater Asuncion.

“We are traveling early to Asuncion in order to participate in an eight-nation pre-competition tournament that will take place in Asuncion, 12th – 16th November. After the tournament, the team will continue intensive training ahead of our first match against Portugal on 22nd November,” Team Administrator, Sunday Okayi disclosed.

The pre-competition tournament will involve Oman, Tahiti, Paraguay, Nigeria, Belarus, United Arab Emirates, Senegal, and one other team to be confirmed.

Host nation Paraguay will tackle Japan in the tournament-opening game on 21st November. After their first game against Portugal on 22nd November, the Supersand Eagles take to the beach against Oman on 24th November and then against Brazil two days later. 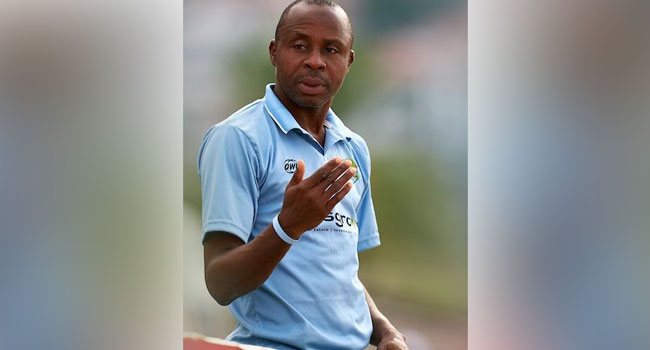 Former Sand Eagles goalkeeper, Coach Abdullahi Isa has identified the absence of a viable league system as a major problem affecting the development of beach soccer in Nigeria.

Coach Isa and his team, Kebbi Beach Soccer Club are competing at the World Winners Cup in Alanya, Turkey where they have been playing against top teams from different parts of the world.

In an interview with Channels Sports, Coach Isa admits participating at the tournament has been a good eye-opener on the current trends of the sport and a charge that a lot of work must be done to meet international standards.

“From what I have seen here at this tournament, Nigeria is still lacking behind in beach soccer. The sport has gone beyond saying all is well. Coming to Alanya is a good reminder that we must work hard to improve.” The coach said.

The Kebbi Fishers, Nigeria and Africa’s sole representative at the championship in Turkey, have been receiving beach soccer lessons from countries that have invested in the sport. In their opening group d match, they fell badly 0-15 to Levante UD of Spain.

In the second group match, the Nigerian team improved but lost narrowly 5-6 to Napoli Patron of Greece. In the third match against Germany’s Real Munster, they lost 10-6 but coach Isa is pleased with the progress the team is making.

“It’s a very good experience and exposure for the team. The boys have seen it all here and they have been able to practice all we have been telling them about beach soccer, particularly on the techniques which is what the opponents used against them.

Majority of our players play on grass, they are yet to understand movement on sand and they are just getting to know the game. It is a good thing, so when they go back to Nigeria, they will adjust and get better”. He told Channels Sports.

Despite the poor run of results, coach Isa is confident the team will get better and they did just that today beating Atletico Licata of Italy 5-2 in their fourth match to record their first win at the championship.

“They’ve been improving match after match. I know they will keep getting better and they will prove it again tomorrow because they have acclimatized and understand the game now. They know they just have to win”.

After the event in Alanya, Turkey, the Kebbi Beach Soccer team will feature at the COPA Lagos and the Sand Eagles goalkeeper coach says it’s about time to give proper attention to the development of beach soccer in Nigeria.

“From what I’ve seen in Alanya, if we want Beach Soccer to grow in Nigeria, we must have a league. It is very important. If we don’t have a league, it will be very difficult to compete at international tournaments.

Our opponents have leagues in their countries, they play all the time on sand and so they get used to it. They learn new skills and understand how to move on the sand. Check entire Nigeria, how many states are giving attention to Beach Soccer, maybe Kebbi State and having a tournament once a year won’t bring development so we need to have a league if we really want this game to grow in Nigeria.” Coach Isa concluded.

Up next for Kebbi Beach Soccer Club at the World Winners Cup is Al-Arabi of Kuwait. 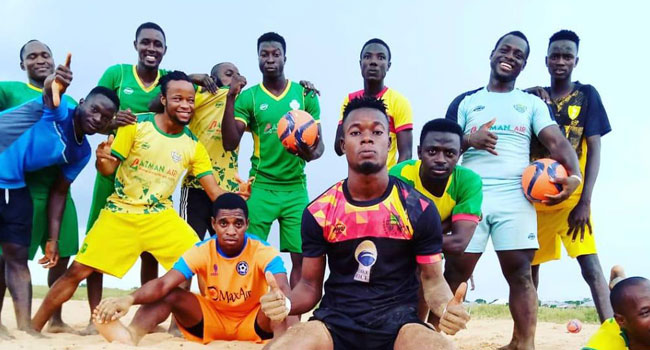 Coach of the Kebbi Beach Soccer club, Abdullahi Isa, has expressed confidence in the team’s preparedness for the maiden edition of the World Winners Cup.

According to coach Isa, the team who are expected in Alanya, Turkey today to compete at the competition, are not be bothered about the quality of their opponents.

Isa, who has been preparing the team for the championship, is confident the Kebbi Fishers will impress and understand current trends that will aid in developing the sport in the country.

“We know the quality of our opponents but it doesn’t bother us. We have prepared well and focused on giving Africa a good representation.”

The Kebbi Fishers have been drawn in group d with Levante UD of Spain, Germany’s Real Munster and Napoli Patron of Greece.

Flamengo of Brazil, Boca Gdanks of Poland, Shahin Khazar of Iran and Kuwait’s Al-Arabi were drawn in group b while BSC Kristall of Russia, Copenhagen BS of Denmark, AT Licata of Italy and Iraq’s Masafi Al Wasat complete group c.

Chairman of Kebbi Beach Soccer Club, Mahmud Hadejia is pleased with the level of preparation, thanked all those who have supported the project and asked for more support during and after the tournament.

“We are the only team from Africa, so we have a huge responsibility to do well at the championship. We have good players, some have even joined the national team. We hope to have a good tournament.”

Twenty teams will participate at the tournament organized by beach soccer worldwide from the 21st till the 27th of this month. 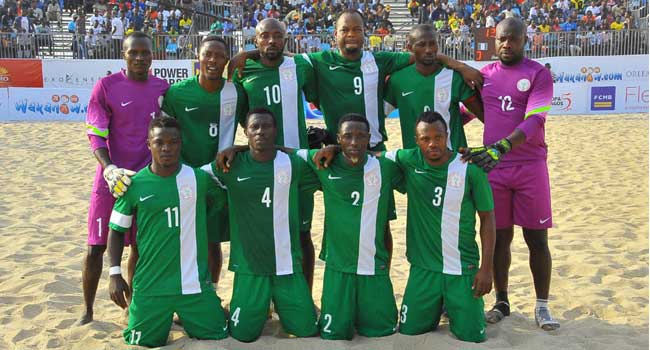 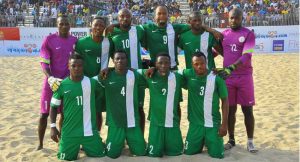 Goals from Abu Azeez, Suleiman Ogodo, Emeka Ogbona, Emmanuel Owhoferia gave Nigeria victory in what was seen by many as a one-sided game.

Coach Adamu Ejo’s boys will now face Senegal in the final of the tournament later today.

Senegal defeated Egypt 5-2 in the first semifinal and have also qualified for the World Beach Soccer Championship. 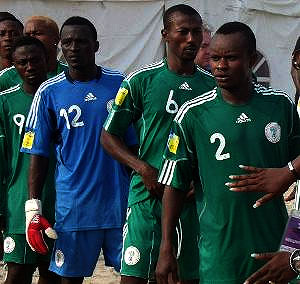 Nigeria’s representative in the Copa Lagos presently going on; the Supersand Eagles are sure on a jolly ride towards the lifting of the Copa title as pounced on Argentina slashing the South America country on sand 5-0 at the Copa Beach Soccer Worldwide at the Eko Atlantic Beach Soccer Stadium today.

Four seconds into the game, Victor Tale opened scoring for the Eagles thanks to a deflection and Nigeria was 1 ahead and it should not come as a surprise that Tale’s goal so far has been recorded as the fastest goal of the four-team tournament  and he will be hoping no goal comes faster than his.

On the whole, the game between the Supersand eagles and Argentina was a one-way game Tale became a thorn in the flesh of Hector Petrasso’s team as they couldn’t keep the striker at bay.

Tale continued his damaging moves including an overhead kick from close range as he was just too much for the South American to hold down with several scoring occasions.

Nigeria proved stronger of the two teams in the second period in spite of Christian Cuevas’ spirited attempts to help the South Americans back in the game.

Supersand Eagles’ captain, Isiaka Olawale made it 3-0 for the Supersand Eagles after the combination of the Hilaire brothers, Santiago and Ezequiel failed to produce a goal at the other end seconds earlier.

And towards the end of the second half of the game, the combination of In the Mendoza and Ezequiel couldn’t stop the fifth goal as they attempted to stop Ikechukwu Ibenegbu’s effort, though Ogbonnaya Okemmiri’s screamer carried the day for the Supersand Eagles as the shot hugged the top corner of goalkeeper Mendoza’s goalpost as he watched the ball go in helplessly.

With this result, the Supersand Eagles are sure ahead of Lebanon and Portugal with three points, as they are on top of the Copa Lagos with six points.