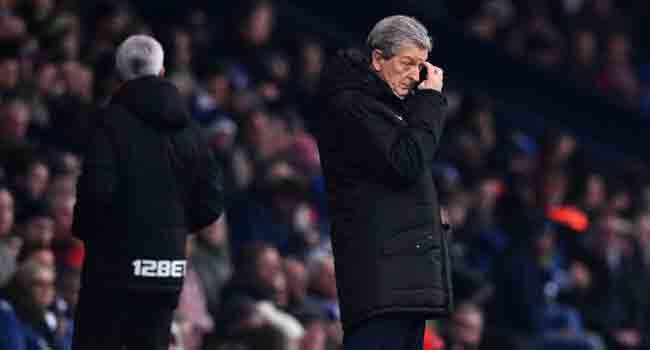 Crystal Palace manager Roy Hodgson said Christian Benteke was not supposed to have taken the stoppage-time penalty he squandered in his side’s 2-2 draw with Bournemouth on Saturday.

Luka Milivojevic had netted a penalty earlier in the game, but when Charlie Daniels was deemed to have fouled Wilfried Zaha in injury time at Selhurst Park, Benteke snatched the ball.

The Belgium striker’s tame spot-kick was saved by Bournemouth goalkeeper Asmir Begovic to leave Palace at the foot of the Premier League table.

Hodgson became involved in a heated discussion with a fan at the final whistle and he told the BBC: “The guy was only asking a question. He was asking why Benteke had been told to take the penalty.

“I was telling him he hadn’t. Benteke got hold of the ball. It was a unilateral decision. No-one on our team was able to wrest the ball from him.

“We, the management, don’t expect players to change those decisions. We tried to shout out our instructions. They obviously didn’t reach the penalty spot.”

After Jermain Defoe put Bournemouth ahead, Palace came from behind to lead through Milivojevic’s penalty and a close-range effort by substitute Scott Dann, who came on for the injured Mamadou Sakho.

But Defoe earned the visitors a point with a magnificent, dipping shot from the right-hand side of the penalty area in first-half injury time.

Palace are now unbeaten in five games and Hodgson tried to put their disappointment into context.

“The fact is, even if we had come out of the bottom three, we’re still very much anchored near the foot of the table,” said the former England manager, who succeeded Frank de Boer at Palace in September.

“We missed an opportunity today. I believe we did enough to get the three points. If you miss penalties at home, you’ve only got yourself to blame.”

Benteke, already linked with Premier league rivals, Arsenal and Chelsea handed in a transfer request  Tuesday morning.  To further fuel his eminent exit, Monday evening news reveals that the  Belgian did not travel with the club for  a pre-season training camp in Germany after being granted extended leave

Lambert said: “While we’re hugely disappointed that Christian has put in a transfer request, it’s important that people appreciate we are trying to build something strong and vibrant here at the club, something this club demands and stands for, and we want Christian to be part of that.”

The club also  reacted to Benteke’s decision with disappointment  but are hopeful of retaining his services.  “In response to reports that Christian Benteke has not travelled to Germany with the club and has made a transfer request, we can confirm that both are accurate.”

The statement added : “For clarity’s sake, however, he had already been given extra time off until July 18 and was reminded that there are three years remaining on his contract, we consider him to be a Villa player and expect that he will be with us for the 2013-14 season.

“Having received his transfer request, we have also informed him that should we receive an offer within an appropriate timeframe during pre-season which meets our valuation we would act upon it. But he will remain a Villa player should this not happen.”

Benteke  helped  Villa to  avoid  relegation last season scoring  19 goals in the league, and 23 in all competitions after moving to the Midlands from Genk for a reported £7 million.