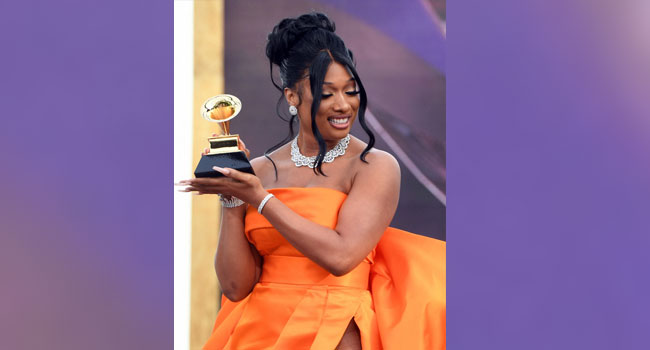 She shared her first statuette of the night, for Best Rap Performance, with pop queen and leading nominee Beyonce for the TikTok smash “Savage.”

The normally glam soiree hosted by comedian Trevor Noah was scaled back due to coronavirus restrictions, but was nevertheless in large part live, with a pack of stars performing on stages in the round in Los Angeles, including a chest-baring Harry Styles and bejeweled Billie Eilish.

The ceremony, which falls nearly a year to the day after Covid-19 grounded tours and forced performance venues to close, is an effort by the music world to try to move past a crushing 2020 by celebrating its biggest stars.

In the pre-broadcast ceremony, when many of the Grammys were handed out, Beyonce captured her first trophy of the day for Best Music Video, which she shared with her eldest daughter, Blue Ivy, who was in the clip for “Brown Skin Girl.”

The megastar did not Zoom in to accept the prize from the Recording Academy that many say has failed her in the past, with repeated snubs in past years for critically acclaimed work.

But Eilish and her brother and collaborator Finneas did appear to accept an award for “No Time To Die,” the theme from the forthcoming James Bond film of the same name.

They later performed her nominated hit “Everything I Wanted.”

Beyonce snagged her second prize for her collaboration with Megan Thee Stallion.

“Every artist that was nominated for this award is so amazing,” the statuesque artist, wearing a vivid orange Dolce and Gabbana gown with a hip-high slit, said outside the Staples Center on a balmy Los Angeles afternoon as she accepted the Best New Artist prize.

Beyonce’s sweeping “Black Parade” — released in June amid explosive nationwide anti-racism protests after another spate of deadly police violence targeting Black Americans — has her up for the coveted Record and Song of the Year awards that will be doled out later in the night.

Swift and Lipa both lost in the field for Best Pop Duo/Group Performance, however, which went to Lady Gaga and Ariana Grande’s “Rain On Me.”

South Korean phenomenon BTS was also up for that prize; their loss dashed hopes for a historic win for Asian pop music from the Academy.

Many critics favor the overall chances of Lipa, who took a big risk in dropping a sparkly disco ball of a dance album just as the pandemic took hold — a bet that paid off.

Swift — a onetime Grammys darling who hasn’t won in five years — bagged her nominations for releasing her surprise quarantine album “folklore,” a commercial and critical hit.

And rapper Ricch — who won a trophy last year for his collaboration with the late artist Nipsey Hussle — is a strong contender, including for Song of the Year, which honors songwriting, for his hit “The Box.”

Brittany Howard — known for fronting the band Alabama Shakes — won Best Rock Song, as Fiona Apple scored two awards for her album “Fetch The Bolt Cutters,” which many critics hailed as a masterpiece.

The notoriously reclusive Apple said on Instagram she would not be attending the ceremony, explaining she was not up for the scrutiny attending such a show entails.

Though most of the rock fields were unprecedentedly dominated by women, The Strokes won for Best Rock Album for “The New Abnormal,” their first Grammy ever.

Nigerian superstar Burna Boy was also a first-time winner for Best Global Music Album, ecstatically accepting the prize which he said “is a big win for my generation of Africans all over the world.”

But it wouldn’t be the Grammys without controversy.

The Weeknd has pledged to stop submitting music for awards consideration after he surprisingly received no nominations, despite a big year commercially.

Rapper DaBaby dripped in diamonds as he performed his nominated hit ‘Rockstar,” and Latin trap king Bad Bunny delivered a club-esque rendition of his hit “Dakiti.”

Cardi B and Megan Thee Stallion were set to bring their bawdy bop “WAP” — a summer hit that celebrates female sexuality with lurid metaphors — later in the show, with the artists also performing their respective tracks “Up” and “Body.”

“I can’t wait for everyone to see us kill it Tonight” Megan tweeted, after her fellow rapper congratulated her on her win.