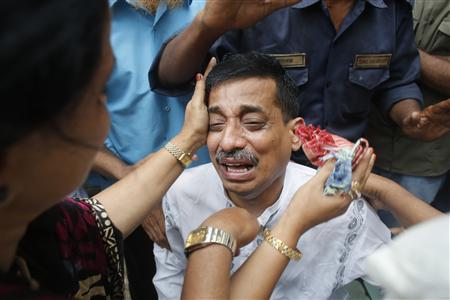 Eight people were killed when a fire swept through a clothing factory in Bangladesh, police and an industry association official said on Thursday, as the death toll from the collapse of another factory building two weeks ago climbed above 900.

The fire, in an industrial district of Dhaka, comes amid global attention on safety standards in Bangladesh’s booming garment industry following the catastrophic collapse of Rana Plaza, on the outskirts of the city, in the world’s deadliest industrial accident since the Bhopal disaster in India in 1984.

“It is not clear to us how the accident happened, but we are trying to find out the cause,” Mohammad Atiqul Islam, president of the Bangladesh Garment Manufacturers and Exporters Association (BGMEA), told Reuters.

On Wednesday the Bangladesh government said it had shut down 18 garment factories for safety reasons following the April 24 collapse of Rana Plaza, which housed five garment factories making clothes for Western brands. Six were cleared to re-open on Thursday after inspectors issued safety certificates.

Salvage teams were still pulling bodies from the rubble of the Rana Plaza complex in Savar, around 20 miles northwest of Dhaka, and on Thursday a spokesman at the army control room coordinating the operation said the number of people confirmed to have been killed had reached 912.

Roughly 2,500 people were rescued from the building, including many injured, but there is no official estimate of the numbers still missing.

The government has blamed the owners and builders of the eight-storey complex for using shoddy building materials, including substandard rods, bricks and cement, and not obtaining the necessary clearances.

Bangladesh’s garment industry, which accounts for 80 percent of the poor South Asian country’s exports, has seen a series of deadly accidents, including a fire in November that killed 112 people.

The latest fire, in an 11-storey building in the Mirpur industrial district, broke out at a factory belonging to the Tung Hai Group, a large garment exporter.

“The factory was closed and all the workers had left the premises an hour earlier,” said fire service official Bhazan Sarker.

A fire service official and BGMEA president Islam said the Bangladeshi managing director of the company and a senior police officer were among the dead. The others killed were friends and personal staff of the factory boss, officials said.

Tung Hai Group says on its website that it has more than 1,000 employees and its customers include major Western retailers including Britain’s Primark, and Inditex Group of Spain. It makes products including cardigans, jumpers and pyjamas.