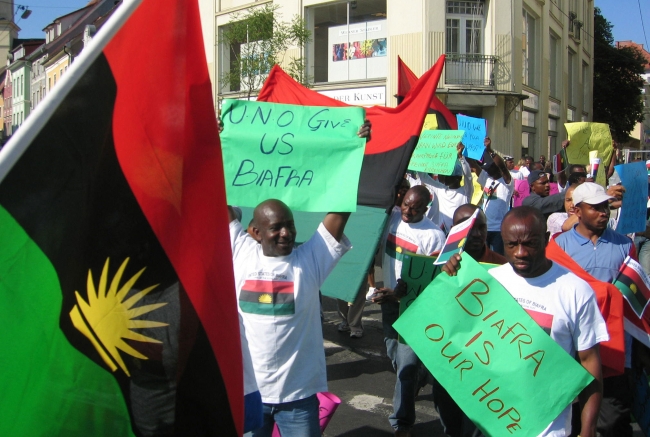 The police in Enugu state, South East Nigeria on Monday arrested over 100 persons for staging a march in support of the independence for the former breakaway state of Biafra.

The protesters, who were led by one Ben Onwuka, were believed to be members of the Biafran Zionist Movement raised the Biafran flag and then marched through the streets of the Enugu. They were arrested around Akwata axis of Agbani road in the capital city of Enugu state.

The group first gathered on Sunday to mark the birthday of former Biafran leader Chukwuemeka Ojukwu, who died in March.

The Police Public Relations Officer of the state, Ebere Amaraizu said the police acted on a tip off and that the suspected members were arrested with 61 Biafra flags and other flags that seemed to belong to other countries.

He said the suspects were arrested with 13 Berets, three Bands and eight Biafra Zionist Movement forms and that they have been charged to court for treason. 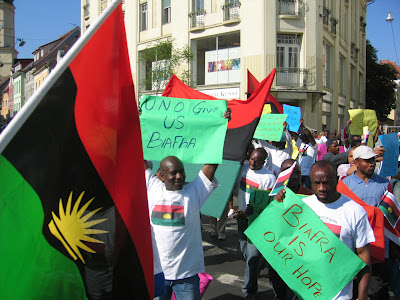 A pro-Biafra group, Biafra Zionist Movement, BZM, announced, on Tuesday, that it had commenced the process to launch the struggle for a State of Biafra with the international community, saying that the formal declaration of the new Biafra Republic had been slated for November 5.

This came as Conference of Igbo Youth Organizations, CIYO, warned that Ndigbo “would no longer watch in silence while our brothers and sisters are slaughtered like animals” in the Northern States.

National President of BZM, Benjamin Onwuka, at a briefing said what prevented the realization of Biafra republic over the years was the inability to get the support of world powers, like the United States of America to back the project.

He expressed regrets that the international community did not know the aspirations of the Biafra people, saying “Biafra must therefore be internationalized because the forces preventing the dreams for our independence are vested in the United Kingdom.

Biafra can only be achieved when we secure the support of the United States of America; the day USA comes to our side, that day we shall be free from Nigeria; the story of South Sudan where a bloody civil war was fought for over 24 years is a typical example.”

Meanwhile, the Igbo youths in a statement endorsed by 10 youth leaders, including the National Coordinator, Igbo Youth Grand Alliance, Uchenna Uchehara, who read it after their emergency meeting in Owerri yesterday said: “Events of the past few months in Nigeria have become very disturbing to stakeholders, especially the Igbo nation that played a major role in the founding of Nigeria and inspite of the tragedies of the Biafran war, resolved to give total support to one united Nigeria”.