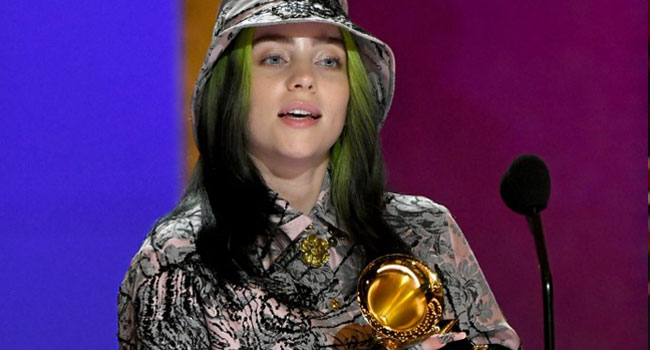 Billie Eilish on Sunday snagged the Grammy for Record of the Year for the second straight time, a major feat for the 19-year-old who swept all four top categories at last year’s ceremony.

This time, the edgy pop sensation bested a crowded field including the night’s big stars Megan Thee Stallion and Beyonce, along with Dua Lipa, Post Malone, and Doja Cat, to win the prize honoring the year’s best overall song for her hit “Everything I Wanted.”

In 2020, the teenage phenom cemented her place as an establishment leader, posting a banner Grammy night by sweeping prizes for Album, Record, and Song of the Year, plus Best New Artist — the first woman and youngest artist to do so.

“Everything I Wanted” is a gauzy ode to the struggles of stardom that touches on the teenage angst over feelings of inadequacy, imposter syndrome, and concerns about fitting in.

Last year, she won Record of the Year honors for her hit “Bad Guy” off her debut “when we all fall asleep, where do we go?”, which won for Album of the Year.

Before her album’s release in March 2019, Eilish had already won a fervent online following for her bold, often haunting pop sound featuring heavy bass and tinges of trap and electronic dance music.

She is now one of the biggest pop stars in the world, and though the pandemic forced her to cancel her global tour, she still posted a strong year that included penning the theme ballad for the upcoming James Bond film “No Time to Die” — which also scored a Grammy on Sunday. 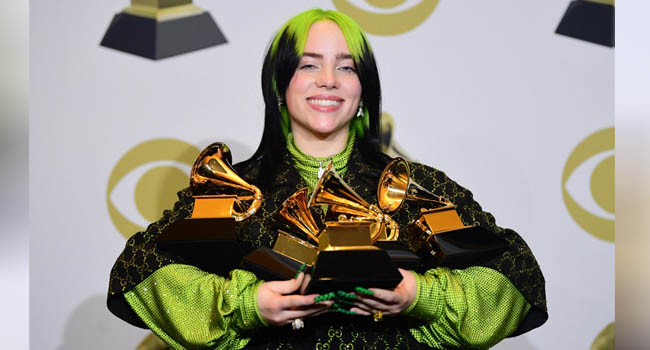 Pop iconoclast Billie Eilish cleaned up at the Grammys on Sunday, winning five awards, as the music world mourned the loss of LA’s hometown basketball hero Kobe Bryant with a series of emotional tributes.

Eilish, 18, swept the “big four” prizes — Album of the Year, Song of the Year, Record of the Year and Best New Artist — in an industry acknowledgment of her wave-making role as the new reference point for pop’s future.

“What’s next? I don’t know — be in this moment is all I’m thinking about,” Eilish told reporters backstage.

Lizzo — one of her main competitors, who won three awards — kicked off the glitzy gala at the Staples Center by dedicating it to Bryant, in the very arena where the NBA icon made history with the Los Angeles Lakers.

“Tonight is for Kobe,” shouted the 31-year-old twerking flautist, hours after his death in a helicopter crash was confirmed. His 13-year-old daughter and seven others also died in the incident.

Lizzo then launched into an eye-popping medley performance of her top hits that set the tone for the night.

“And we’re literally standing here heartbroken in the house that Kobe Bryant built,” said Keys, before launching into a soulful rendition of “It’s So Hard to Say Goodbye (To Yesterday)” with the group Boyz II Men.

“He would want us to keep the vibrations high,” Keys later said, before singing a humorous yet soothing opening monologue at the piano.

A mushrooming crowd of people, many of them in tears, gathered near the arena to mourn the 41-year-old Bryant. Flags were flying at half-mast. But the show went on, with an understated performance from Eilish who thanked her fans — and fellow nominee Ariana Grande — in accepting her haul of trophies.

“Mainly I think the fans deserve everything,” she said, standing alongside her brother Finneas O’Connell, who shared in her Grammy glory while also winning his own producing and engineering awards.

“I feel like they have not been talked about enough tonight because they’re the only reason any of us are here at all. So thanks to the fans.”

And she gave a shoutout to Grande, who despite five nominations went home empty-handed, saying that Grande’s “thank u, next,” had been a lifesaver for her.

“I think it deserves more than anything in the world, I love you so much,” Eilish said.

“This whole week, I’d be lost in my problems, stressed out — and then in an instant all of that can go away and your priorities really shift,” the 31-year-old superstar said, alluding to Bryant’s death.

“Let’s continue to reach out, hold each other down and lift each other up.”

The veterans were not shut out — Lady Gaga won two Grammys for her soundtrack for the hit film “A Star Is Born,” and one went to Beyonce, who nabbed the prize for best music film for “Homecoming.”

A message of love pervaded the night, particularly in light of Bryant’s death and a moving all-star tribute to the late rapper Nipsey Hussle.

Just days before the gala, the Recording Academy’s suspended CEO Deborah Dugan — the first woman to lead the embattled institution behind the Grammys — filed an explosive discrimination complaint with the Equal Employment Opportunity Commission.

She says she was suspended after raising concerns over sexual harassment, voting irregularities and other misconduct within the Academy — one of music’s most influential organizations, but one long accused of favoritism and a lack of diversity.

Dugan also alleged that her predecessor, Neil Portnow, had raped a foreign female musician — an allegation he has rejected as “ludicrous and untrue.”

The controversy went more or less unmentioned on Sunday, with only a few vague onstage allusions to the crisis. Often remembered as much for its performances as its winners, the Grammys included a boudoir-inspired medley show from Grande, along with a rollicking genre-blending rendition of “Old Town Road” that featured K-pop sensation BTS, country star Billy Ray Cyrus and the eclectic DJ Diplo.

Gary Clark Jr, who won three Grammys including best rock song for his anti-racist “This Land,” gave several showstopping performances, and his success was seen by many as an overdue recognition of black influence on rock.

Usher drove the crowd crazy in leading a tribute to the late legend Prince, performing songs including “Little Red Corvette,” “When Doves Cry” and “Kiss.”

FKA Twigs joined him in lingerie to deliver a pole-dancing performance — and none other than Prince’s protegee Sheila E was on the drums.