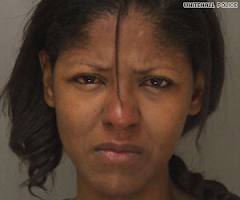 A bride-to-be has been charged with murder after allegedly stabbing her fiance just hours before the couple’s wedding was to start near Whitehall, Pennsylvania.

Na Cola Darcel Franklin, 31, and her fiance Billy Rafael Brewster, 36, were planning to tie the knot at 10 a.m, but at some point during the night, Franklin and Brewster began arguing, Steve Luksa, first deputy to the Lehigh County District Attorney, told ABCNews.com.

In the heat of the argument, Franklin allegedly stabbed Brewster twice with a kitchen knife, police said.

“One of the stab wounds punctured his heart,” Luksa said.

When police arrived at the apartment, shortly after 2 a.m., they found Brewster bleeding from chest wounds on the second floor landing.

He was transported to the Lehigh County Trauma center and pronounced dead at 3:24 a.m., less than seven hours before the wedding.

Luksa said the couple was not alone in the apartment when the stabbing took place. The couple’s children, and extended family members were also present because of the impending nuptials.

Franklin was arrested and charged with one count of criminal homicide, Luksa said.

During her arraignment, Franklin told District Judge Donna Butler, “You got to check again,” unable to comprehend that Brewster was dead, the Allentown Morning Call reported.

She is being held in Lehigh County Prison without bail, Luksa said.

When Franklin told Bulter via the video conference arraignment that she wanted to go home, Butler responded, “You are not going home any time in the near future.”