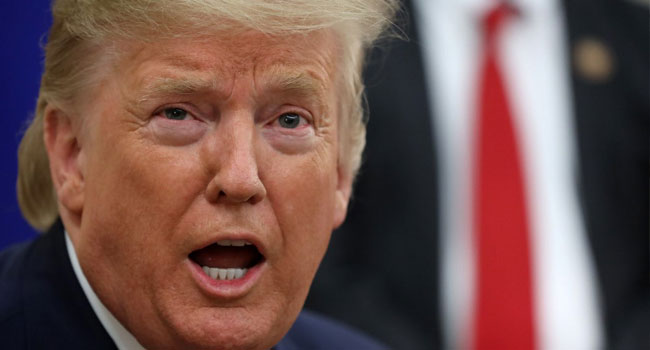 President Donald Trump on Wednesday criticised Boeing as a “very disappointing company” because of the aerospace giant’s recent problems after the grounding of the 737 MAX plane, which he said had a knock-on effect for the US economy.

“This is one of the great companies of the world, let’s say as of a year ago, and then all of a sudden things happen,” Trump said in an interview on CNBC from the Davos economic forum in Switzerland.

This “had a tremendous impact. You know, when you talk about growth, it’s so big that some people say it’s more than a half a point of GDP. So Boeing — big, big disappointment to me,” he said.

Boeing had Tuesday officially pushed back the time frame for the 737 MAX to return to the skies, sending shares plunging and overshadowing an earlier announcement of a first flight of the delayed 777X plane.

US Treasury Secretary Steven Mnuchin said on Tuesday he believed that issues including the grounding of Boeing 737 MAX plane had shaved some 0.5 to 0.7 of a percentage point off the US growth rate.

President John Atta Mills on Sunday morning visited the scene of accident of a Boeing 727 cargo plane that crashed at the Hajj Village near the El Wak Stadium in Accra, which claimed 12 lives. He also visited the clinic where the four survivors were being treated.

The President accompanied by Senior Government officials, toured the scene and expressed sympathy to the bereaved families of the passengers on the 207 Mercedes Benz that was mangled by the back tyres of the flight and others, including military officer, who lost their lives in melee.  He gave the assurance of the necessary Government intervention.

Four people out of the 12 dead have been identified as Gideon Ansah Kumi, 19, a final year student of Harvard Senior High School At Acca New Town; George Osei, 33, Driver of the 207 bus; Kwame Boadu, 24, the mate; and Evans Tabariyeng 34, passenger on board. The bodies have been deposited at the 37 Military Hospital Mortuary in Accra.

“I pray that all of you have survived and wish you speedy recovery,” Mills said.

Ghana, a west African nation of some 24 million people, is not known to have had any recent plane crashes.