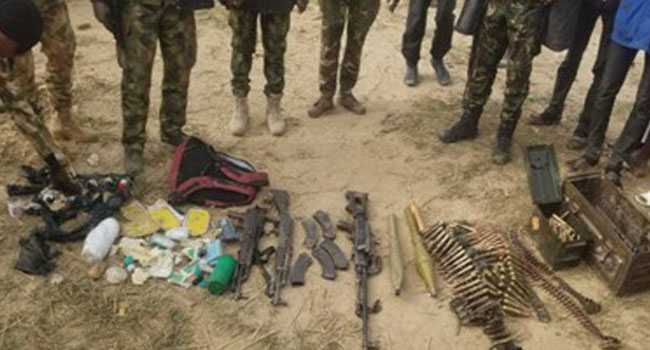 Troops of the Nigerian Army have rescued 461 Boko Haram captives and killed some insurgents during a raid and search operation between Jakana and mainok area of Maiduguri-Damaturu Road in Borno state.

The operation which was carried out by combined troops of 5 and 29 Battalion in conjunction with the Chief of Army Staff intervention Battalion 2, combed Boko Haram hideouts and killed some insurgents.

According to Colonel Aminu Iliyasu, the Nigerian Army Operations Media Coordinator in a statement on Sunday, those rescued comprise of “100 adult males, 154 adult females and 207 children during raid/cordon and search operations on 4 January 2020.”

Colonel Iliyasu also released pictures which according to him are bodies of killed Boko Haram criminals and a cache of arms and ammunition captured by troops of 29 Task Force Brigade after an encounter at Jakana on a separate but continuing encounter on Saturday, January 4.

The Media Coordinator said the operations which lasted between 2nd to 4th January 2020 was about “Traction of Boko Haram hideouts between Jakana and Mainok by combined troops of 5 and 29 Brigades in conjunction with the Chief of Army Staff Intervention Battalion 2.”

Another group of four minors according to the statement were also rescued by troops of the 159 Task Force Battalion deployed at a checkpoint along Damasak-Kareto road in Mobbar Local government of Borno State.

The Nigerian Army says it has rescued over 5,000 hostages held captive by the Boko Haram sect in several clearance operation in the northeast.

A statement issued by the acting Director, Army Public Relations, Colonel Sani Usman, says that 10 terrorists were killed in the operation.

The statement noted that arms, ammunition and logistic equipment in large quantities were recovered from the terrorists.

In an earlier operation, a joint patrol team of Sector One of 27 Task Force Brigade and Army Headquarters Strike Group cleared the dreaded terrorists’ enclaves in Buhari, Matari and Kaidiri villages in Borno State.

Colonel Usman explained that the remnants of the terrorists at Kaidiri, on sighting the patrol team chickened out and withdrew in disarray into Niger Republic with gunshot wounds.

He added that the troops pursued them and got two Boko Haram terrorists while they recovered seven motorcycles and borehole equipment from them.