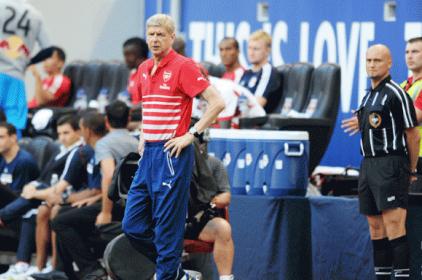 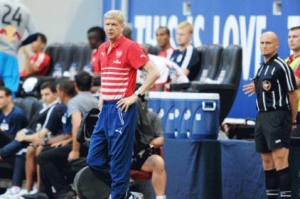 Arsenal Manager, Arsène Wenger, addressed the media after his side were narrowly beaten by the New York Red Bulls on Saturday evening.

According to the transcript published on the club’s official website, arsenal.com, Wenger spoke about going into the game without a striker, “We had no Giroud, no Walcott, no Sanchez and no Podolski. Akpom did well but he’s a young boy and he has to learn a lot but he has potential.”

He explained, “As long as you don’t score it’s not good but you can play with three No 9s and you don’t score sometimes. We were dominated physically in the first half, we came back into it in the last 10 minutes, their keepers made a few saves and our combinations were better.” He, however, admitted that the team lacked pace without any centre forward.

He also revealed that young striker, Sanogo missed the game because he had a thigh problem and he didn’t want to take a gamble.

Value Playing In New York
“For us it was a great experience, everybody enjoyed it and nobody wants to go home. It was a short trip but a very exciting one because New York is a special city. But what is even more special for us is how popular football is now. The values we stand for are shared here and everybody was very friendly and everybody respects what we try to do. One of the values we have to stand up for as well is when your opponent is better than us, we have to say ‘well done’ and today that was the case.”

On Facing Thierry Henry
“I think it was a great afternoon for him. He played well and his team played well as well. You could see that everybody was focused and ready for a fight. If they can maintain that kind of commitment and solidarity they have shown today and if they keep Thierry Henry in this form, they have a good chance to come back into a strong position in the league.

“Thierry can be dangerous from everywhere and understands very quickly what he can take advantage from. He was sharp today in the one against one and you could see why he was a great player because when he played in midfield his passing was excellent. He has vision as well and you could see that he can play everywhere.”

Lessons From Last Season’s Title Race
“We were not far (away0) it was very tight. We wanted to add that little bit of quality which we missed in the end. It depends on one or two games at the end of the day. There are 38 games, we finished with 79 points, and the winner of the championship had 86 so it was very tight.

“Hopefully we can get that little bit more quality in the decisive games. We were more consistent than everybody else against the lower teams, we performed less well against the top-level teams so that’s what we have to gain.”

Wenger noted, however, that it was too early to talk about the chances of his younger players featuring this season, “it’s our first game. I believe that physically this game was a bit too high for us because some of the players came back last Monday. It was not ideal but we got away without any injuries.”