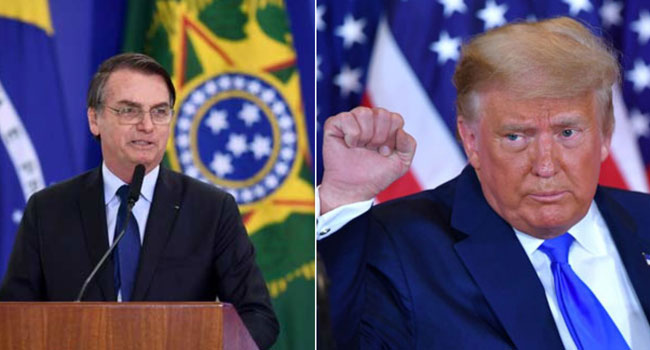 Brazilian President Jair Bolsonaro on Thursday backed his ally Donald Trump’s claim of fraud in the US presidential election and warned the chaos that rocked Washington could also hit Brazil’s elections next year.

The far-right leader dubbed the “Tropical Trump,” is a staunch supporter of the American president, a stance he maintained even as international condemnation poured in for Trump’s role in encouraging the mob that stormed the US Capitol Wednesday.

“What was the problem that caused that whole crisis, basically? Lack of trust in the election,” Bolsonaro told supporters outside the presidential palace.

“They maximized mail-in ballots because of this pandemic thing, and there were people who voted three, four times. Dead people voted. It was a free-for-all. No one can deny that.”

Election officials, US states, and the courts have all dismissed Trump’s claims of widespread fraud.

But Bolsonaro has shown determination to stand by Trump to the end.

He was the last leader in the G20 group of nations to acknowledge president-elect Joe Biden’s victory, which he did only after the US electoral college officially confirmed the November 3 election result more than a month later.

Political analysts say Trump’s defeat isolates Bolsonaro, who modeled his own rise to the presidency on the Republican billionaires and hurts his chances for re-election in 2022.

As the shocking images of Wednesday’s unrest in Washington circulated in Brazil, many commentators speculated the South American country could be headed for a similar situation next year if Bolsonaro loses.

Bolsonaro only fueled those concerns when he repeated his frequent criticism of Brazil’s electronic voting system, which he alleges — without evidence — is riddled with fraud.

“There’s a fraud here, too,” he said, warning Brazil faced “an even worse problem than the United States” if it did not reintroduce paper ballots, as he has insisted.

Reports from stadium operators in Brazil have revealed that the most expensive of the 12 stadiums built or renovated for the 2014 FIFA World Cup has a leaking roof, less than eight months after it was finished.

SECOPA, the local government agency that runs the Mane Garrincha National Stadium in Brasilia, will ask the company that rebuilt it to explain why parts of the roof let in rain during the women’s match between Brazil and Chile.

Local media reported that almost the entire lower ring of the stands was soaked. SECOPA however played down the problem, saying the leaks were not serious and would not affect any of the matches being played there during next year’s World Cup.

“Because it is a new, grandiose and complex stadium, some small points are still being corrected and tested but there is nothing that compromises the running of the stadium or the holding of events there,” SECOPA said in a statement.

The stadium comes with a five-year guarantee and any repair work will be paid for by the builders, SECOPA added.

The national stadium in the capital Brasilia cost more than 1.2 billion Real ($508.99 million). It will stage six World Cup matches including a quarter-final and the third-place playoff.

The venue was inaugurated in May and it hosted the opening match of the Confederations Cup between Brazil and Japan in June. It has held 17 major events since then, including several first division football matches, stadium officials said.

At least three of the six World Cup stadiums still to be finished before the tournament kicks off in June will be handed over behind schedule. A total of five people have died while working on the 12 venues, including one man in Brasilia.