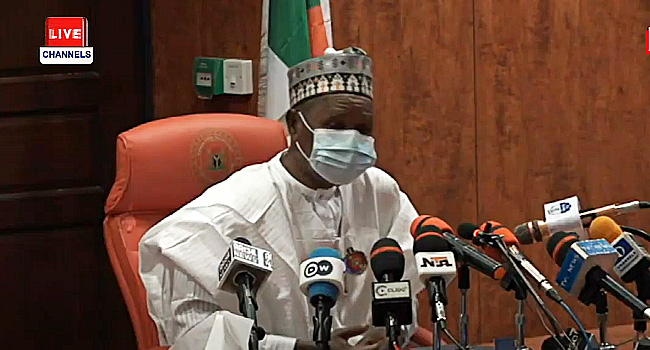 He received them at the State House on Friday morning, where he assured them that they will be properly taken care of before being handed to their parents.

The governor also assured them that they will each go through proper medical checks while adding that their education will also be taken care of.

“It’s been 7 days since this happened, but by God’s grace we’ve been able to retrieve the children from the bandits. All 344 of them,” Governor Masari said.

“Immediately we leave here, we will take them to them to where they will have a bath and change thier clothes. And then reunite then with their parents.

“The hospital staff are waiting for you to check every boy to make sure nothing is wrong and if there’s anything there strong they will tell the hospital personnel”.

The abduction occurred on the same day that President Muhammadu Buhari had travelled to Daura, his hometown in Katsina for a private visit.

The President had condemned the incident in a statement shortly after it happened and sent a delegation of the Federal Government comprising the Minister of Defence, Major General Bashir Magashi, and the service chiefs to Katsina to work with the state government in securing the release of the schoolboys.

In spite of his action, he came under fire for not visiting the community to see things for himself and to sympathise with the parents of the missing students.

He has, however, commended the governor for the efforts in securing their release.

According to him, law enforcement agencies, the military especially the Army, and the governor worked extremely hard.

When asked when other Nigerians who are in captivity will be released, said his administration is trying his best to equally secure their release. 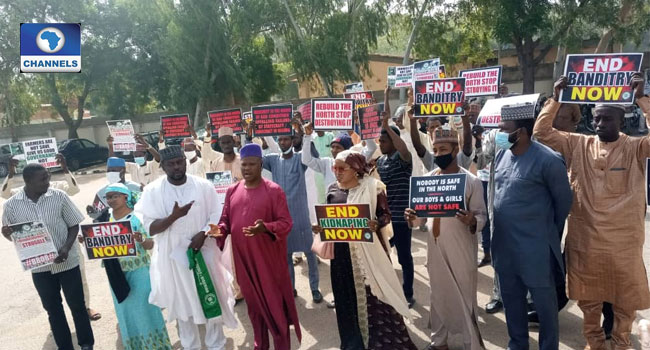 The Coalition of Northern Groups have demanded the rescue of abducted students of Government Science Secondary School, Kankara, Katsina State.

They however shelved their plan to protest in Daura to register their concerns with President Muhammadu Buhari who is in the town on a weeklong visit.

The National Coordinator of the Coalition, Balarabe Rufa’i explained that instead, the CNG is using the occasion to launch the #BringBackOurBoys struggles that would go on ceaselessly until all the abducted children are returned alive and safe.

Speaking at a press conference in Katsina, the state capital the group described the abduction of the children as a total weakness of President Buhari’s administration and his failure to protect the lives of all Nigerians.

They also called for the unconditional resignation of all the Service Chiefs.

While explaining the reason why they shelved their plan to take protest to Daura, the group said it is as a result of considerations raised by the security agencies in Katsina State.

They added that the prevailing tense atmosphere across the state may not guarantee a peaceful ending to the protests considering the crowd likely to be pulled out.

CNG said further that their last consideration is that the Katsina Government has given assurances that having developed contact with the abductors, it will within the shortest possible time secure the release of the children, an effort that should not be jeopardized at this point.

The CNG had earlier on Wednesday planned to stage a protest to Daura.

The spokesperson, Abdulazeez Suleiman vowed that the protest will be indefinite until the students are rescued.

He said that the protest will kick off in Katsina, the state capital on Thursday and will then proceed to Daura to register their concerns with President Muhammadu Buhari who is in the town on a weeklong visit. 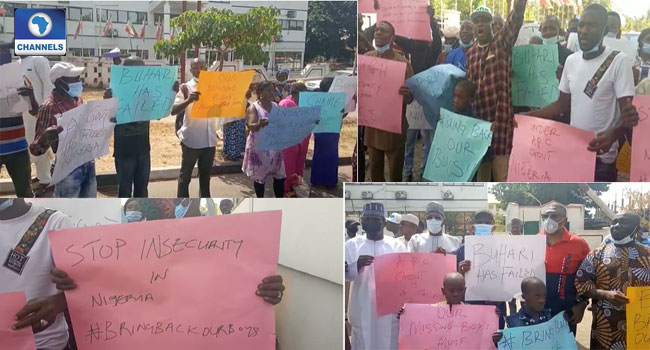 The National Chairman of the Peoples Democratic Party (PDP), Uche Secondus on Thursday led a protest demanding the rescue of the abducted students of Government Science Secondary School, Kankara in Katsina State.

The protest which is tagged #BringBackOurBoys was held at the PDP liaison office in Maitama.

The protesters who include young boys and women displayed placards with various inscriptions condemning the abduction and the failing security situation in the country.

They insisted that President Muhammadu Buhari-led administration must rescue the boys from their captors, and reunite them with their parents.

At least 333 students are still missing since the attack which Boko Haram has claimed to be responsible for. 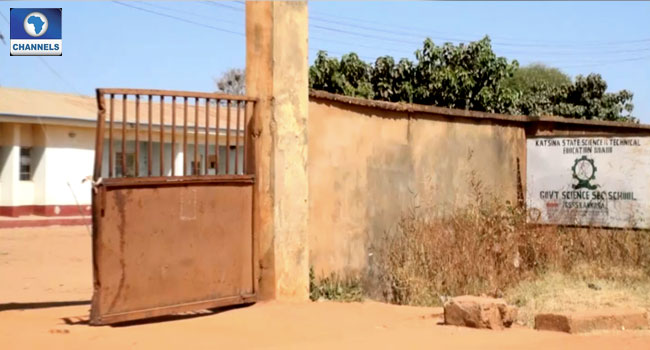 The Coalition of Northern Group (CNG) has planned to stage a protest using the hashtag #BringBackOurBoys to demand the return of abducted pupils of Government Science Secondary School, Kankara in Katsina State.

In a statement signed on Wednesday by CNG spokesperson, Abdulazeez Suleiman the group vowed that the protest will be indefinite until the students are rescued.

He said that the protest will kick off in Katsina, the state capital on Thursday and will then proceed to Daura to register their concerns with President Muhammadu Buhari who is in the town on a weeklong visit.

READ ALSO: Nigeria’s Unity Based On Ruthless Exploitation Of The Working People – Falana

He lamented that this group cannot keep silent anymore concerning the increasing insecurity in the North.

“It will be unreasonable to expect any northerner and well-meaning Nigerians to fold their arms and watch the North, a significant component of the country abandoned to the mercy of bandits and murderers and kidnappers,” Suleiman said.

He added that CNG Board of Trustees Chairman Nastura Ashir Shariff is already in touch with parents of the abducted pupils and assured them of support through this trying moment.

Other CNG members from Jigawa, Kano and Katsina are expected to join the protest.