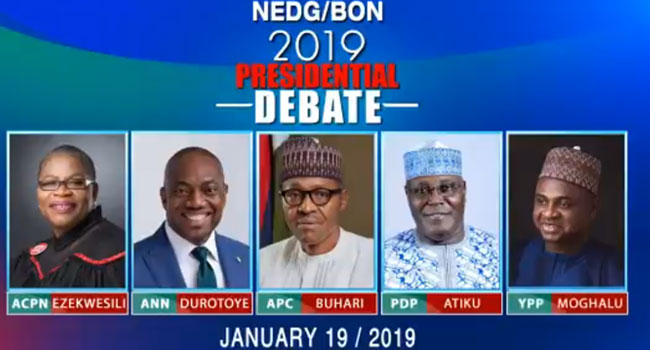 The presidential debate organised by the Nigeria Elections Debate Group (NEDG) and the Broadcasting Organisations of Nigeria (BON) will hold today in Abuja.

The debate is scheduled to hold by 7:00 p.m at the Transcorp Hilton Hotel, the same venue where the vice-presidential debate held on Friday, December 14, 2018.

The debate offers the platform for the presidential candidates to reveal to Nigerians their plans for the country as the nation prepares for the general elections next year.

Expected to partake of the presidential debate are the flagbearers of the Allied Congress Party Of Nigeria (ACPN), the Alliance For New Nigeria (ANN), All Progressives Congress (APC), the Peoples Democratic Party (PDP) and The Young Progressive Party (YPP).

NEDG had earlier explained how five political parties were selected to participate in the presidential and vice-presidential debates.

Eddie Emesiri, the NEDG Executive Secretary, had earlier explained that the parties for the debate were picked through an independently administered multi-stage process.

Emesiri issued the statement in reaction to the criticism triggered by the number of political parties selected by the NEDG and BON.

Below is the full statement of how the organisers of the debates came about the number of candidates selected.

Further to our earlier announcement of participating parties for the Presidential Debates, the organising partners of the Debates hereby reiterate the transparency and independence of the selection process that resulted in the five participating political parties.

Firstly, we would like to state that the Presidential Debates are organised by a partnership of the Nigeria Elections Debate Group (NEDG) and Broadcasting Organisations of Nigeria (BON), a broad coalition of over 100 public and private broadcasters in Nigeria with coverage of terrestrial radio, television, direct-to-home, digital terrestrial television and multimedia distribution system. The members of BON are responsible for over 250 radio and TV stations across Nigeria.

The choice of participating parties for the debate was made through an independently administered multi-stage process. The first stage was an independent online poll and the second involved the distribution of survey questionnaires per state, to professionals, artisans, students, etc; respondents were within the voting age and spread across urban, semi-urban and rural classifications. The third stage was to take an aggregate of the stage result and extend invitations to the top 5 parties for the debate.

Following our disclosure of the participating parties earlier in the week, our attention has been drawn to some reactions in the public space over the decision to limit the participation to five parties and exclusion of some party flag bearers from the debate. Considering the vast number of contending parties, the decision to limit to five parties was taken at the beginning of our process to ensure ease of management for the debates. All the stages of the selection process were focused on political parties, taking into consideration the importance of national spread and diversity. Focus was not on specific individuals or candidates.

We wish to emphatically state that the NEDG and BON were not influenced or induced by anyone to include or exclude any political party from the debate. We understand the disappointment of some political parties who would have wished to see their candidates share their visions for the country at the Debates. However, Nigerians have spoken through the multi-stage process and we urge all Nigerians to respect their choice as we abide by the outcome of the independent party selection process.

Join the presidential debate live via the stream below at 7:00pm.