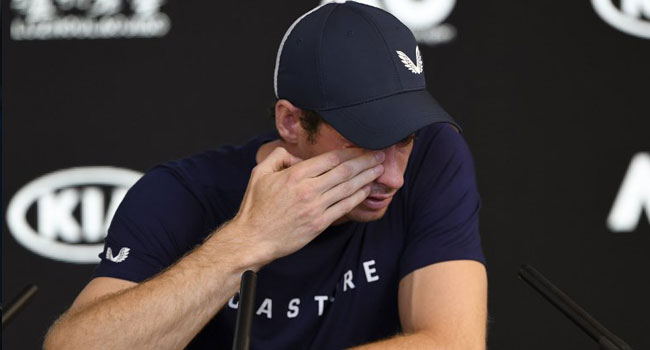 American doubles legend Bob Bryan gave Andy Murray a ray of hope on Wednesday, saying he believes the former world number one could make a comeback after major hip surgery.

“I personally think he can do it,” said Bryan, who was talking after enjoying a winning comeback in his first Grand Slam doubles since undergoing his own hip replacement surgery last summer.

Murray bowed out of the Australian Open on Monday for potentially the last time after saying his hip pain was too much too bear.

Earlier he had declared he would call it a day on his storied career after Wimbledon if he got that far.

“Look, I’m happy to be back,” said the 40-year-old Bryan. “I got a metal hip. There was no guarantees I was going to make it back.

“Going in to get a metal hip implant, there’s no one that’s come back from that in tennis. I’m happy it’s feeling good.”

Bryan said Murray, 31, had explored every conceivable avenue trying to find a solution to his chronic hip pain.

“I just represent an option for him,” he said. “That guy does everything you can possibly do as far as training and rehab.

“He’s talked to a million specialists. But I’m really the only guy to be playing on tour with a metal hip.”

An emotional Murray opened up about the personal agony of his battered right hip after losing an epic Australian Open five-setter to Roberto Bautista Agut two days earlier.

The three-time Grand Slam champion said he hates even simple things like walking his dogs because the pain is so bad.

Murray faces a heart-wrenching dilemma — battle on through the pain for an emotional farewell at Wimbledon or undergo major surgery in the next week or so knowing it may mean he can never play tennis again.

Bryan gave his view of what Murray might expect under the scalpel and rehab.

“It’s called a hip resurfacing with an artificial implant,” explained Bryan. “It’s a full replacement. Has the bar that goes all the way down the femur.

“I was on crutches a couple days later. I was at the US Open (in September) three weeks after surgery with a cane.

“We started our training December 5 hitting some balls pretty hard, playing some sets,” he revealed.

“Look, I’m showing that it can be done in doubles, but no one’s ever come back with this surgery on the singles court,” cautioned the holder of a record 16 Grand Slam men’s doubles titles alongside brother Mike.

“I think he’s going to have the surgery. He’s probably going to just rehab it as best he can. If he sees there’s a chance to come back, you know…

“I personally think he can do it. But, you know, there’s no evidence that it’s possible in tennis. I mean, so much wear and tear. But I think he could do it.”