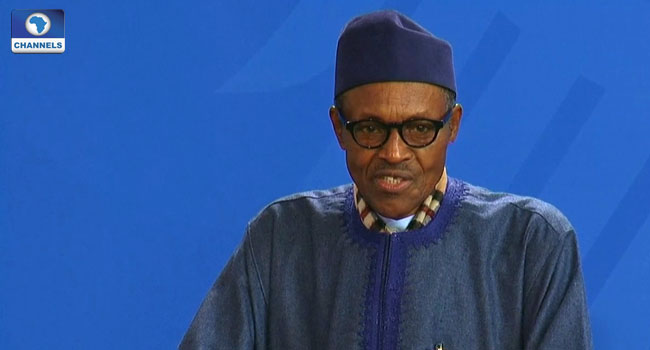 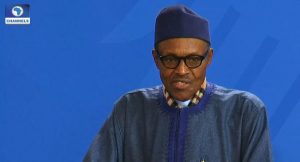 President Muhammadu Buhari says his administration is greatly encouraged by the uncommon support from Nigerians in the fight against corruption, as well as initiatives aimed at stimulating the economy.

Speaking in an interactive session in Berlin with representatives of the Nigerian Community in Germany, President Buhari said that his administration will reciprocate the gesture by strengthening critical institutions needed for sustainable development and prosperity.

“We are working hard to empower our institutions especially our educational institutions.

“If you educate a person that is the best you can do for him but if not you make him susceptible to religious, ethnic, negative thinking and action.

“Nigerians are virtually supporting us in our fight against corruption, security and the economy. He referred to “Rolls Royces,” recently discovered in the homes of certain government officials as a clear reference of the rot in society and the fact that the war against corruption in the country is working.

“There are things that are happening, which if such had happened before there would have been major riot, like the removal of subsidy on fuel,” he said.

President Buhari told Nigerians in the Diaspora that it was regrettable that over the years, oil marketers had colluded with banks to defraud Nigeria of much needed revenue from the commodity.

“One third of the activities of the oil marketers are fraudulent, you can see how some of us Nigerians are wicked.

“They just take the money, stamp some papers without bringing the product and this fraudulent activity was between bankers and businessmen,” he said.

The President declared that his administration will continue “to be very hard on corruption”, in addition to encouraging more Nigerians to pay their tax.

“If you work hard and get your money we will try and see how much tax you can pay us, but to take money from government and get away with it no more,” the said.

The President used the occasion of his interaction with Nigerians to underscore the importance of his three-day visit to Germany, the largest economy in Europe, noting that he was upbeat on improved trade ties between both countries because of new investment incentives offered by Nigeria. 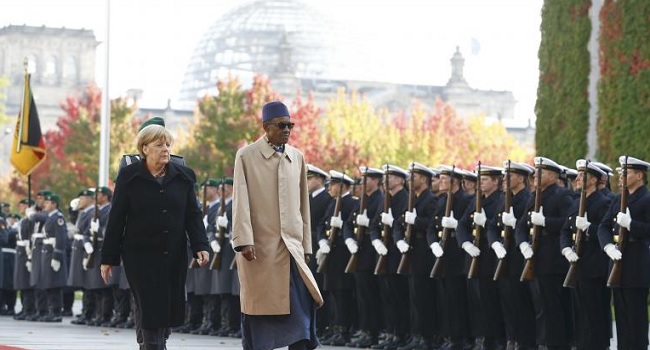 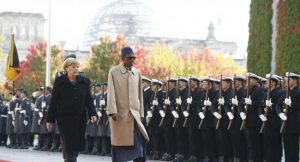 President Muhammadu Buhari’s three-day official visit to Germany ended on a compassionate note on Saturday with his convoy veering off its way back to the airport in Berlin, to visit a Nigerian military officer receiving treatment in a Berlin hospital.

The military officer, Brigadier-General Mohammed Sani Aliyu, the Acting Commander of the 3 Division of the Nigerian Army, Jos survived a ghastly road accident in the course of a duty tour in the North-East.

The head of Training and Operations of the Nigerian Army, Major-General Yusha’u Abubakar, who was in the same vehicle was not so lucky as he died in the auto crash on Maiduguri-Damaturu road.

President Buhari, accompanied by the Governors of Borno and Imo, the National Security Adviser, NSA, the Minister of Interior and that of Foreign Affairs congratulated General Aliyu for the progress he has made in his treatment in the last six months in hospital.

The President and his delegation wished him a quick recovery and an early return to his family and duties in Nigeria. He gave a further assurance that his administration will continue to accord priority to the health and wellbeing of service personnel.

Doctors said General Aliyu could barely move his head only when he was stretchered in, with the rest of the body torn and broken in many parts. Now, he can move around with very little assistance.

He thanked the President for his visit, saying his spirit to serve Nigeria remains unbroken.

Nigeria’s President, Muhammadu Buhari, is seeking increase in trade relations between his nation and Germany.

President Buhari, who addressed a German-Nigeria Business Forum in Berlin where he was on official visit, urged German businessmen to explore different sectors of Nigeria’s economy that had not been opened up.

He told the gathering that a new bank, Development Bank of Nigeria, would soon begin operations to strengthen the government’s economic diversification programme.

The Nigerian leader explained that the bank, when fully operational, would support small and medium enterprises in the country, by improving their access to financing.

“Our ambitions of creating a diversified and inclusive economy in Nigeria can only be achieved by having a mix of small, medium and large businesses.

“This is why we worked with the German Development Agency, KFW, in designing the Development Bank of Nigeria which will support the small and medium size enterprises both financially and technically to ensure they take their rightful place in the industrialisation value chain.

“I am pleased to announce that Development Bank of Nigeria will be taking off soon and should be a game changer in our economic diversification plans,” he said.

President Buhari, who described Foreign Direct Investment (FDI) into Nigeria from Germany as modest, urged prospective investors at the gathering to go beyond the expressions of interest and make binding commitments for trade, investments and industry in the key priority sectors of Agriculture, infrastructure, solid minerals and digital economy.

In a statement by the President’s spokesman, Mr Garba Shehu, Mr Buhari said Nigeria, which recorded a trade volume of $2.96 billion with Germany in 2015, still had a great deal of unexploited potential and room to diversify its exports to Germany and increase overall trade volumes.

“In A Hurry To Develop”

According to the President, trade relations between both countries primarily take the form of oil and gas exports from Nigeria, machinery, vehicles and vehicle parts, telecommunications technology and chemical products in the other direction.

“Nigeria has remained a country of potential. Now we are in a hurry to develop and realise that potential.

“A major economy, that is subject to good governance on the basis of the rule of law and constitutional order and a responsible member of the international community,” he said.

President Buhari, who had earlier met with the German Chancellor Angela Merkel and President Joachim Gauck, told the business gathering that “with the successes recorded in the fight against terrorism and the administration’s resolute commitment to the war against corruption, Nigeria is open for business and broader relationship with Germany”.

He had told the German Chancellor that he would continue to press for the release of other girls abducted by Boko Haram members in April 2014.

Twenty-one of the over 200 girls were released on Thursday.

On corruption, he said: “We have boldly set out to bring an end to a culture of impunity and abuse of public trust. Corruption is the reason why we went through years of an oil boom and came out with very little to show in terms of savings or investments.

“Corruption is the reason our military struggled for so long against Boko Haram. Corruption is one of the reasons that in spite of our rich human and natural resources as a country, seventy percent of our population continues to live in poverty.

“Now we have said enough is enough. It is time to make public funds work for the public good. And that is why we are bringing culprits to book and recovering looted funds and assets”.