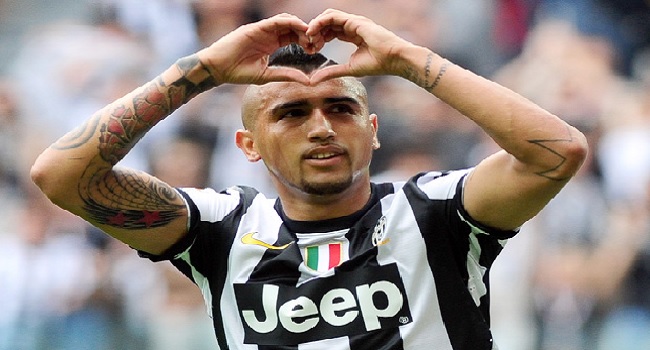 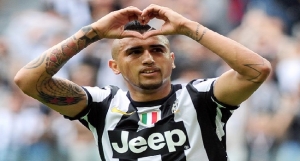 German Bundesliga side, Bayern Munich, have confirmed the signing of Arturo Vidal after agreeing a deal believed to be €37 million fee with the Serie A champions, Juventus.

Vidal, who helped Chile to win the Copa America, signed a four-year deal with the Bavarian after successfully undergoing  medical.

Sport Director, Matthias Sammer, told reporters during the unveiling of  Vidal in Munich on Tuesday, that the Chilean signed a contract until 2019 and it contains an option for another year.

Vidal, who has 69 caps for Chile, won four consecutive Serie A titles and one Coppa Italia, as well as helping the club reach May’s Champions League final, where they were beaten by Barcelona.

“I’m very happy,” Vidal told Bayern’s official website. “This is a new step in my career and I hope I do well here. I want to help the team and win trophies. It’s a dream come true for me personally.

Vidal had been a target for the Bavarians when he joined Juve from Bayer Leverkusen for €12.5m in 2011, and Bayern CEO Karl-Heinz Rummenigge strongly criticised the player at the time for opting to move to Turin.

The midfielder, could make his debut in the German Supercup against Wolfsburg on Saturday. 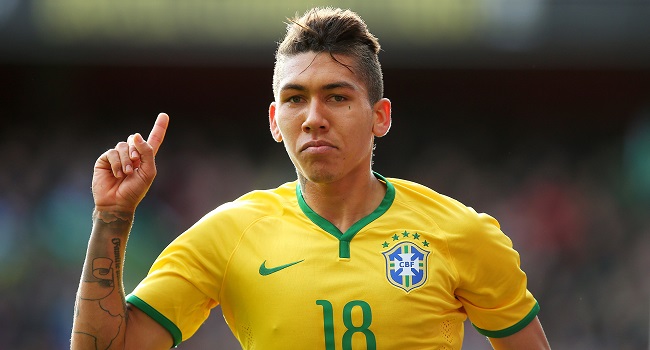 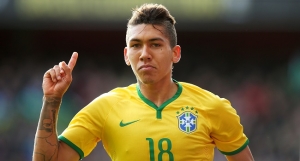 The 23-year-old’s five-year deal was subject to a medical, which would take place after his return from the Copa America in Chile.

The Brazilian forward has scored 47 goals in 151 games for Hoffenheim, becoming the Reds’ second most expensive player after Andy Carroll, who was signed from Newcastle for £35m in 2011.

However, having spent the last four and a half seasons in the Bundesliga, Firmino was on target for Brazil in their 2-1 Copa America victory over Venezuela on Sunday. 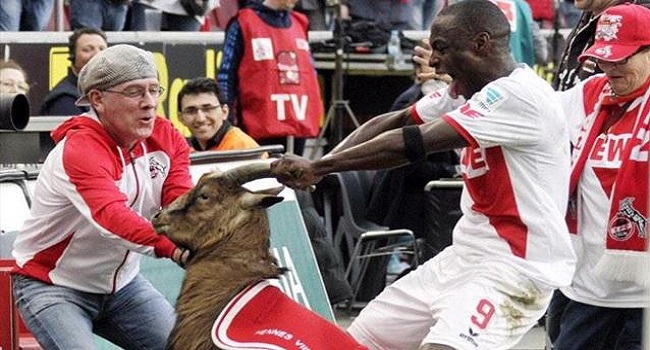 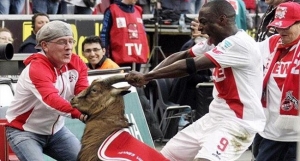 Cologne forward, Anthony Ujah, has apologised for grabbing the club mascot – a goat – by the horns during celebrations in their 4-2 Bundesliga victory over Eintracht Frankfurt on Sunday.

After scoring to secure a 4-1 lead in the 81st minute, the Nigerian ran to the side of the pitch where the goat is positioned during home games, grabbed the animal named Hennes VIII by the horns and attempted to drag it onto the pitch.

The animal’s handler was initially taken by surprise but managed to quickly recover and pull the goat back before the forward returned to the pitch as Cologne celebrated their first home win since October.

“Perfect Sunday. Sorry Hennes. I was a bit too rough on him,” Ujah wrote on Twitter and Facebook while also posting a photo of him pulling the goat.

The club also saw the humorous side of the celebrations.

“Hennes is used to such stuff. He may have a bit of a sore neck,” sports director Joerg Schmadtke told reporters. 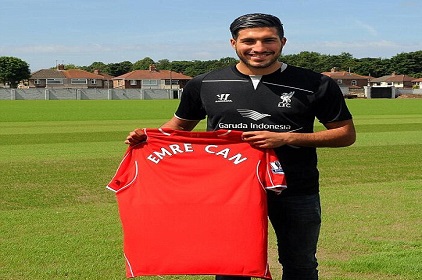 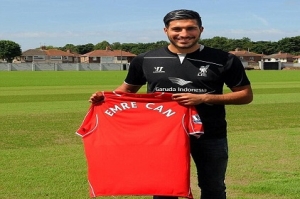 Bayern Munich have returned to their southern German hometown the evening after successfully defending their Bundesliga title in record time.

Bayern beat Hertha Berlin 3-1 on Tuesday (March 25) evening thanks to goals from Toni Kroos, Mario Goetze and Franck Ribery, winning the title with seven games left in the campaign.

Last season’s treble winners claimed their 23rd Bundesliga crown with a 10th straight away victory, extending their winning streak to a remarkable 19 consecutive league games and their unbeaten run to 52 league matches – all Bundesliga records.

The players looked relaxed wearing team tracksuits as they got off the plane at Munich airport, most of them getting into their own cars and driving away.

Spanish coach Pep Guardiola, who won 14 out of 19 titles in four years at Barcelona, has now added the Bundesliga crown to the European Super Cup and Club World Cup titles Bayern won earlier this season.

They have an unassailable 25-point lead over second-placed Borussia Dortmund, who were runners-up last term, with 21 points to play for in Guardiola’s first season in charge. 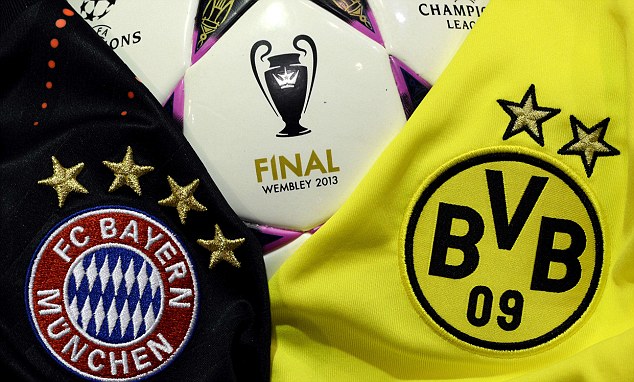 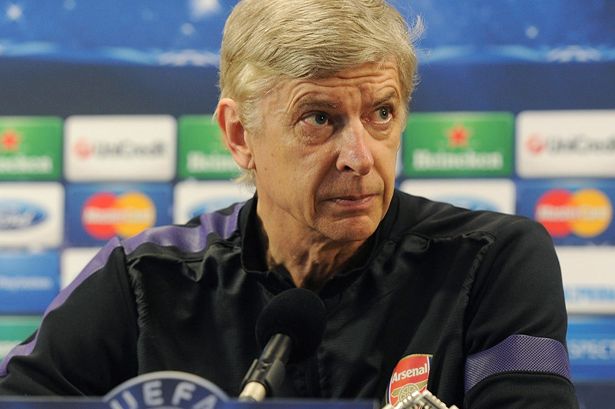 Arsenal’s manager Arsene Wenger has challenged his side to forget their FA cup loss to second-tier Blackburn Rovers and concentrate on a 16 first-leg tie against runaway Bundesliga leaders Bayern Munich today at the Emirates Stadium.

Arsenal were booed off after the 1-nil 5th round home defeat by Blackburn, completing a cup exit double at the hands of lower league opposition, after a shock capital one quarter-final loss to fourth-tier Bradford.

Out of contention in the Premier League and with only a Champions League place to play for, Wenger says they need a big performance against Bayern.

Arsenal has lost in the last two seasons and are faced with a Bayern side cruising towards the Bundesliga title having won 18 of 22 league games. 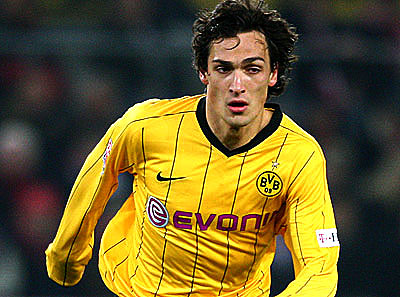 23- year old centre-back for Borussia Dortmund and German National Team; Mats Hummels has said he can leave the Bundesliga side for the right price.

With 22 caps already to his name for Germany, Hummels is an established international who has already won two German league titles since leaving Bayern Munich in 2008.

So far, Hummels has been one the finest defenders produced in Europe right now thanks to being a regular starter for the Borussia Dortmund and his national side Germany as well, topping it all his performance at the recent Euro 2012 while showcasing his talents for Germany brought him to light, making United manager Sir Alex Ferguson dig in for a bid on the defender after he visited Germany to watch Dortmund in the DFB-Pokal Cup final.

Dortmund eventually sold Shinja Kagawa to Manchester United while Hummels signed a new five year deal. However, he has suggested that while he is happy at the club he would consider leaving if a mouth-watering deal came along.

Hummels though satisfied with his present playing status said he is not ruling out moving to another country to play club football as he is relishing such thought as it will be so flattering as he is already having different offers and out of all the offers only tickled his fancy but he knows it is not time yet for the move to made.

Manchester United has faced some defensive difficulties this season as Ferguson has had to deal with the loss of numerous players due to injuries. Phil Jones, Chris Smalling and Nemanja Vidic are all sidelined through injury, while Jonny Evans missed the start of the campaign and has only recently returned to full fitness and with injuries playing a major role there may be a time when Ferguson looks to strengthen his defensive options and Hummels could once again become a genuine target.