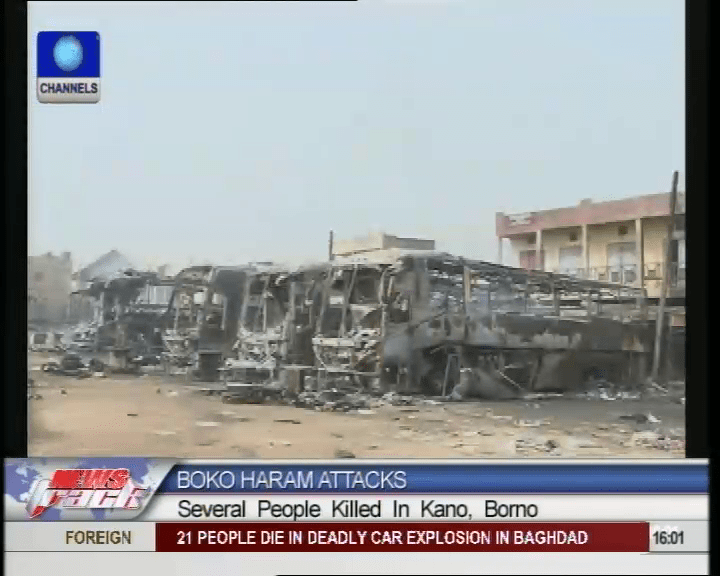 The number of casualties from Monday’s bomb blast in a luxurious bus park in Kano state, has risen to 70.

Tobias Idika, the President of the Ohaneze Ndi Igbo and a witness to the blast told Channels Television that 70 people have been confirmed dead and residents are still trying to identify their relatives.

According to Mr. Idika, five buses were fully loaded with passengers ready to take off when a golf vehicle suspected to be laden with explosives drove into the park and exploded.

According to Mr Idika, many people died instantly while a yet to be known number of the people were admitted in hospitals across the state for various injuries.

The state’s Commissioner of Police, Musa Daura, while addressing a news conference on Tuesday, claimed that only 22 people were so far discovered dead from the blast while 65 others sustained injuries.

The Police boss revealed that two suicide bombers drove a blue coloured car into luxurious bus park along New Road in Sabon Gari of the city.

He added that investigation is on-going to further ascertain the extent of the casualties.

The affected area has been cordoned off and search operation by the Joint Security Forces is on-going.

The Police commission has called on residents to keep calm and continue their normal businesses as the command will continue to protect their lives and property.

Meanwhile a police woman Hajiya Maimuna who was attached to Zone One police headquarters in the state was shot dead along farm center within the metropolis this morning.