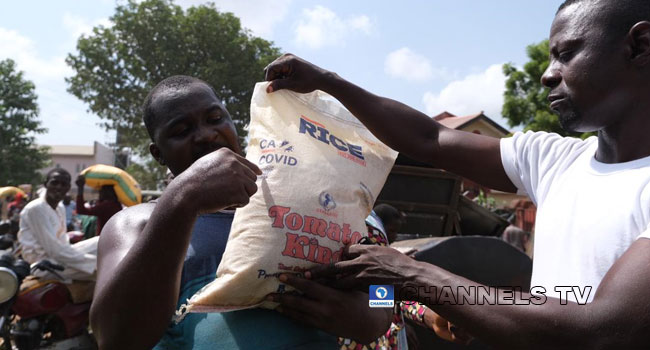 The Coalition Against COVID-19 (CACOVID) has explained why the distribution of COVID-19 palliatives was delayed in some states.

The private sector-led organisation in reaction to the looting of COVID-19 palliatives from warehouses across Nigeria called for calm and revealed that most of the state governments did not receive complete delivery of items allotted to them early enough.

CACOVID explained that as at the time they embarked on the palliatives effort in April, they decided to procure the food directly from the manufacturers, to avoid a distortion of prices in the market.

They added that the food package was designed such that each of the nearly two million vulnerable families received: 10kg bag of rice, 5kg bag of garri/maize flour/semolina, 1 carton of pasta, 2 cartons of noodles, 5kg of sugar and 1kg of salt.

“Unfortunately, the very large size of the order, and the production cycle required to meet the demand, caused delays in delivering the food items to the states in an expeditious manner; hence the resulting delay in delivery of the food palliatives by the state governors.

“For instance, rice had to be milled, semolina and maize flour had to be processed, noodles and pasta had to be manufactured, and sugar had to be refined.

“As such, the first deliveries could not start until June. However, as of October 2020, a sizeable portion of the items had been delivered but yet to be distributed by the governors. Although various states and the FCT had commenced flag-off of the distribution of the food items since early August, some could not conclude the distribution as they were yet to receive complete deliveries of the items allotted to them,” the statement issued on Monday on behalf of CACOVID by Central Bank of Nigeria’s acting Director, Corporate Communications, Osita Nwanisobi explained.

The group said further that although various states and the FCT had commenced flag-off of the distribution of the food items since early August, some could not conclude the distribution as they were yet to receive complete deliveries of the items allotted to them.

“In the interest of transparency and accountability, CACOVID will, in due course, be providing the full delivery schedule and flag-off dates by each state,” Nwanisobi said further.

“Given that the states and local government authorities oversee all relief efforts in their jurisdictions and know their citizens best, we had worked with each governor and the Minister of the FCT, utilising a combination of our protocols and their existing structures and processes to ensure food items reach the intended beneficiaries. We also appointed an independent monitoring team to ensure that the items would be delivered as intended,” the group said.

The group noted that not every warehouse in Nigeria that contains palliatives is affiliated to the CACOVID donation, given that the states, the federal government, and other organisations also made donations. 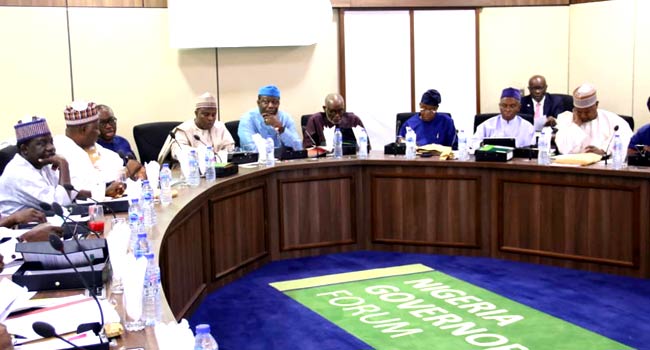 The Nigeria Governors’ Forum (NGF) has denied allegations that COVID-19 palliatives meant for distribution were hoarded by state governments.

According to a statement signed by the forum’s spokesperson Abdulrazaque Bello-Barkindo, on Monday, the governors have held several meetings since the #EndSARS street protests and started to address concerns of members of the public and that they identified calls for justice and an end to police brutality.

“The NGF wishes to state categorically that no State has been involved in or has hoarded any palliatives,” the governors said.

Although the governors regretted the loss of lives and property occasioned by the violent protests that erupted they stressed that it is important for, “a lot of the information circulating on the social media needs to be fact-checked.”

“The NGF pleads with members of the public to desist from spreading rumours which further creates panic and stampede.

“For example, some of the properties stolen and vandalised, include palliatives set aside for vulnerable members of society.

“The NGF reemphasizes and corrects the impression that palliatives found in warehouses that were broken into in Lagos and some other states were kept in storage for members of the society especially our vulnerable citizens,” the statement read in part.

According to the governors, the erroneous impression in the public domain that these palliatives were hoarded is inaccurate, “entirely erroneous and untrue.”

The NGF added that some of the palliatives had the CACOVID stamp embossed on them, meaning that their source is unambiguous.

“Until mid-October, when the NGF had its last meeting, up to ten states had not participated in the flag-off ceremonies for the distribution of palliatives in their States. This was because the items meant for distribution in these states had not been completely received from CACOVID,” the statement added.

The NGF explained that some of the states that still had palliatives in their warehouses chose to keep a strategic reserve ahead of a projected second wave of COVID-19.

They said further that some states were still receiving palliatives from the Federal Government through the Federal Ministry of Humanitarian Affairs, Disaster Management, and Social Development.

NGF, therefore, called on members of the public to check their facts while everyone recognize the need for improved governance and are cautious not to push the wrong narrative. 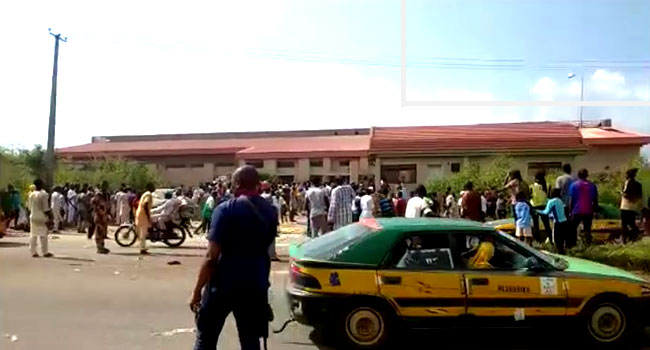 The Kwara State government has condemned the action of some looters who invaded the cargo terminal in Ilorin, the state capital, and carted away palliatives donated by the Coalition Against COVID-19 (CACOVID).

The state government in a statement signed by the Commissioner for Communications, Harriet Afolabi-Oshatimehin, on Friday, said the items were meant for the poor and a special group of vulnerable people.

“The remaining palliatives in the terminal, which the hoodlums preyed on until chased away by security agencies, were meant for special vulnerable groups and just one local government where names of the beneficiaries have just been delivered and officials have started distributing when the street urchins breached the wall of the facility,” the statement added.

Afolabi-Oshatimehin explained that the looted items were meant for specific households, as dictated by CACOVID, and so names had to be properly generated to allow for transparent and orderly distribution.

“The actions of the hoodlums are condemnable and those already arrested would face the full weight of the law.

“The government would not tolerate anyone hiding under any guise to disrupt the peaceful atmosphere in the state,” she added.

The state government said the action of the looters is condemnable and does not reflect the good nature of the people of the state.