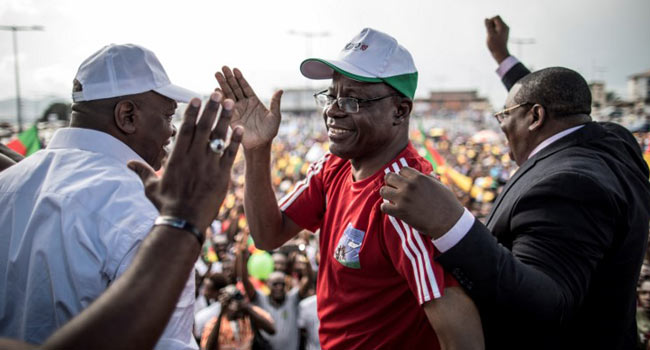 By law each polling station must submit its results, after verification by the Elecam electoral commission, to the Constitutional Court which is responsible for announcing the final, official tally within 15 days.

“I was charged with taking a penalty, I took it and I scored,” said Movement for the Rebirth of Cameroon (MRC) candidate Maurice Kamto at a media conference in Yaounde.

“I have received a clear mandate from the people and I intend to defend it until the end.”

A raft of unofficial results from Cameroon’s almost 25,000 polling stations has already begun to circulate on social media.

Ahead of Kamto’s declaration, Local Government minister Paul Atanga-Nji called on “all the political players… to act responsibly so that the process concludes in the same spirit as it started”.

“Any challenge to the polling process made outside of legal channels will not be tolerated,” he told state media.

Opposition candidates had called on their supporters to oversee the tallying process to prevent any fraud that might favour 85-year-old Biya’s quest for re-election.

“Times are tough. Rise up and prepare to defend your victory because there are some unbelievable things going on,” said outsider opposition hopeful, Cabral Libii, who at 38 was the youngest candidate.

Ahead of the polls, in which 6.5 million voters were eligible to cast ballots, Kamto warned he would “not accept any” result tainted by fraud.

‘No one came to vote’

Labour Minister Gregoire Owona, who is the deputy secretary-general of Biya’s ruling party, said on Twitter: “I strongly recommend that you don’t tie yourself to any violent, insurrection movement”.

Tensions were high during the vote and violence was reported in the anglophone regions which have been torn by a separatist insurgency that erupted a year ago.

After voting began Sunday, security forces shot dead three suspected separatists who had allegedly fired at passersby from a motorcycle in Bamenda, the main city in the English-speaking northwest region, a local official said.

In Buea, capital of the anglophone southwest, three separatists of the so-called Ambazonia Republic separatist movement were gunned down on Friday.

Gunfire was heard in the largely deserted town throughout polling day and a car belonging to the state-run Cameroon Tribune newspaper came under fire.

The violence in the anglophone regions has killed at least 420 civilians, 175 members of the security forces and an unknown number of separatists, according to the International Crisis Group (ICG) think-tank.

“We’re bored because no one came to vote, people stayed at home because they’re scared,” said opposition election observer Georges Fanang in one of Buea’s polling stations.

The army also confirmed that voting could not be held in at least one district of the southwest, Lysoka village, because of the insecurity.

“As expected, turnout in the English regions has been particularly low with virtually all the returns we have seen suggesting less than five per cent,” said ICG analyst Hans de Marie Heungoup.

The poll passed off without incident in the rest of the country.

“Two weeks! We’ve just finished counting here and I’m already getting news from other polling stations,” complained poll worker Francois, 22, after the ballot finished at one voting centre in Yaounde on Sunday night.

But in the far north region, considered a “key” to the election because of its large population, very few opposition election observers deployed to remote polling stations, witnesses said, raising fears of possible fraud.

The region has been rocked by violent attacks carried out by Nigeria-based Boko Haram jihadists despite US efforts to equip and train Cameroonian forces.