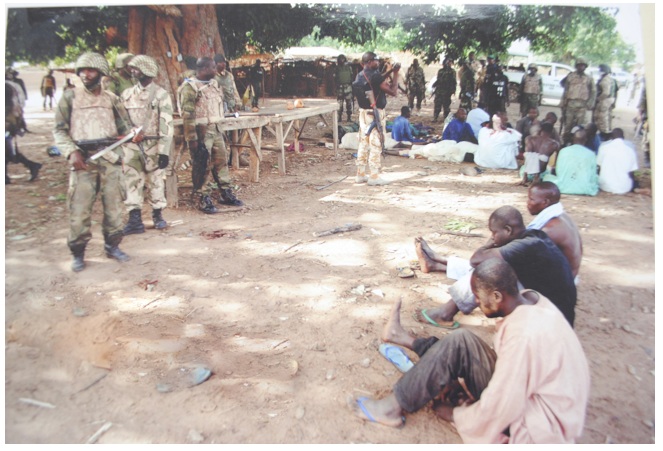 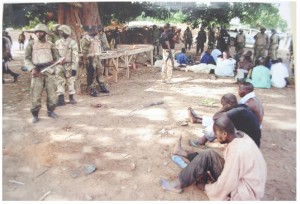 Scores of wounded terrorists, who escaped from various camps under the fire of security forces in north east Nigeria, have been captured in the fringes of Lake Chad.

In a statement, the spokesman for the Multi-National Joint Task Force (MJTF), Major General Chris Olukolade, said the captured terrorists, some of whom were fatally wounded, were already making useful statements to interrogators of the task force.

He said that others were captured by troops in locations around Dikwa, Cross Kauwa, Kukawa and Alargarmo.

In their confessions, it was revealed that some of the camps had been disbanded following the directive of their clerics who declared that the operation of the sect had come to an end as the mission could no longer be sustained.

“The terrorists, who are giving useful information as to the locations of their remnant forces, are full of apologies and pleas for their lives to be spared promising to cooperate.

“They confirmed that starvation was a major problem in addition to ceaseless bombardments on the camp locations even when they kept relocating,” the statement read.

Major General Olukolade also stated that the captured terrorists confirmed that several members of the group had been wounded and that no treatment was forth coming.

The troops have continued their assault on other locations across the three northeast states covered by the state of emergency.

Dislodged camps and fringes of forests, such as Sambisa and others, have become a tourist attraction for people in the region, who have started visiting the camps for sight-seeing.

The task force has warned them to desist from doing so, as the “tendency will no more be condoned where operations are still ongoing”.

There is strict restriction of movements in the area, as the environment has to be cleared for safety of citizens.

The public will be informed when the locations are safe enough, the statement read. 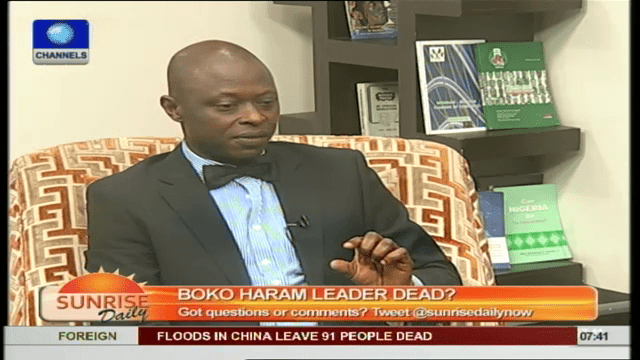 A Security Consultant, Captain Umar Ali (Rtd), has explained the timeline used by the Joint Task Force (JTF) in concluding that the Boko Haram leader, Abubakar Shekau, is dead.

While speaking on Channels Television’s breakfast programme, Sunrise Daily, Mr Ali confirmed the possibility of Shekau’s death although he said “there would be room of doubt” on the part of the people.

The JTF in Borno State, Operation Restore Order, said yesterday that the leader of the outlawed Boko Haram sect, Abubakar Shekau, might have died as a result of injuries sustained during a recent military onslaught on his group.

Given the source of this information, officially announced by JTF spokesman, Lt. Col. Musa Sagir, “it must have been sifted, tested for viability. It must have been verified,” he said, adding that the verification process is the possible explanation for the time lag before the information was released.

He further said that information is passed through the intelligence cycle before it is released. “The JTF would have done that,” he said.

Asides from the intelligence cycle, the JTF used ‘social indicators’ to confirm their speculations. “After the Sambisa attack, we saw a kind of withdrawal. We saw the terrorists’ attacks abating greatly. There was virtually a lull before Kano came up.

And added to that (based on information and follow up I’ve done) in camps that were raided, things were discovered that gave the impression that these people left here in a hurry. A lot of things were abandoned and they moved. Those they couldn’t go with, they burnt outrightly, themselves.

So it’s possible that the leader was injured and they had to abandon ship. And they crossed over to Amitchide and tried to patch him up but he did not survive.”

He also said the attack on the mosque in Borno could have been retaliation for the loss suffered.

The current status quo, he said, poses opportunities for both the Boko Haram sect, law enforcement agencies as well as the government.

He called on the government and security agencies to move from counter-terrorism, which is basically dynamic and military, to anti-terrorism which is ‘more democratic’ in nature.

This involves awareness, information and the option of ‘judicial trial’ for captured terrorists.