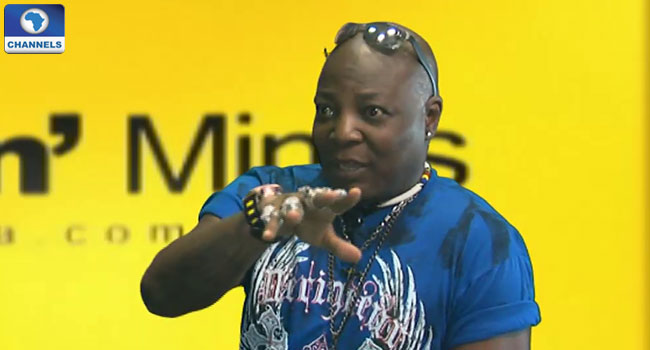 A Nigerian singer, songwriter, television presenter, publisher, producer, one of Nigeria’s most controversial entertainers and a onetime president of the Performing Musicians Association of Nigeria, Charly Boy Oputa (Charles Chukwuemeka Oputa) has described himself as “attention walking on the street”.

On a Channels Television’s programme, Rubbin’ Minds, on Sunday Charly Boy told Ebuka that he had no intention to let people forget him.

“Most of the things that you read are all engineered by me. If I don’t do that, you will soon forget me and I intend not to be forgotten.

“I don’t look at them as unconventional. The people out there do that. For me, it is a very normal thing and because I understand your mind-set… take for instance my rings they are just rings to me but a lot of people will read a lot of meaning into it.

“I just paint all this pictures and you can make what you like of it.

“I play it up because people are busy eating it up,” he said.

On a leaked photograph of another entertainer, dancer and television presenter, Denrele Edun and himself kissing, he said it was leaked with Denrele’s consent.

He further said it was leaked by his people on purpose but did not say if he gave them a go ahead to leak the image.

“Sometimes you can agree to something, but when the heat comes up, whether you can take it or nor is a different matter,” he said.

On current political situation in Nigeria, Charly Boy said: “I am going ahead to give hope to young people not to despair

“This government is all about fighting corruption. We have been surviving on corruption money for the past 50 years. A lot has happened and a lot has gone bad and it is not something that could be fixed in a year or two.

“What I am not sure of is if he has the right kind cabinet to solve our problem. People that are dedicated.

“I have met a few people and the Petroleum Minister is one of them.

“We have been seeing queues for many years and this is not the first time and it is not going to happen in one year.

“He is a perfect gentleman who always meant what he says and says what he means. For me that is a good take away.

“If Fashola is allowed to do his work and if they stop all these petty tribal politics that is going on, he will do well”.

The entertainer also praised his father for his upbringing, saying that the principles he grew up with had made me who he was.