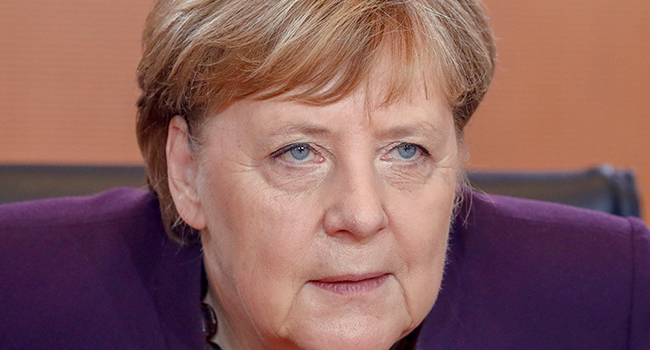 Germany expelled two Russian diplomats on Wednesday after prosecutors said Moscow could be behind the killing of a former Chechen rebel commander in a Berlin park.

Zelimkhan Khangoshvili, a 40-year-old Georgian national, was shot twice in the head at close range in Kleiner Tiergarten park on August 23, allegedly by a Russian man who was arrested shortly afterwards.

The case has been compared with the poisoning of former Russian agent Sergei Skripal in Britain last year with a Soviet-era nerve agent, widely blamed on Russian intelligence.

The attempted murder plunged relations between Britain and Russia into a deep freeze, leading to tit-for-tat diplomatic expulsions.

“A politicised approach to investigation issues is unacceptable,” said the representative, adding that Germany’s statements were “groundless and hostile”.

The suspect in the Berlin killing was said to be riding a bicycle and was seen by witnesses afterwards throwing the bike and a stone-laden bag with a gun into a river.

He has until now been named by police only as Vadim S but evidence revealed by German prosecutors on Wednesday indicated a possible fake identity.

“The foreign ministry has today declared two employees of the Russian embassy in Berlin as personae non gratae with immediate effect,” the ministry said in a statement.

“Despite repeated high-ranking and persistent demands, Russian authorities have not cooperated sufficiently in the investigation into the murder.”

Federal prosecutors in charge of intelligence cases earlier on Wednesday said they had taken over the investigation.

“There is sufficient factual evidence to suggest that the killing… was carried out either on behalf of state agencies of the Russian Federation or those of the Autonomous Chechen Republic,” the prosecutor’s office said in a statement.

Chechnya has been led with an iron fist since 2007 by Ramzan Kadyrov, a close ally of Russian President Vladimir Putin.

Outlining the results of their investigation so far, the statement said Vadim had travelled from Moscow to Paris on August 17 and then on to Warsaw on August 20.

He left his hotel in Warsaw on August 22 and his movements between then and the murder were unclear, it said.

Prosecutors said his visa for travelling to Europe indicated he was a civil engineer working for a company in Saint Petersburg.

But the company was not operational and a fax number for the firm was registered to another company belonging to Russia’s defence ministry.

Prosecutors said the man’s features matched those of a suspect in a 2013 murder in Moscow in which the suspect also approached the victim on a bicycle.

The investigative website Bellingcat on Tuesday said the suspect in both murders was 54-year-old Vadim Krasikov, who grew up in Kazakhstan when it was part of the Soviet Union before spending time in Siberia.

German media said the suspicion was that Russian intelligence agencies had recruited him after the 2013 killing.

Bellingcat said the victim had fought in the second Chechen war in 1999-2002, then continued supporting Chechen separatists from his native Georgia.

He also lived for a time under an assumed identity as Tornike Kavtarashvili, according to media reports.

Bellingcat said he “recruited and armed” a volunteer unit to fight Russian troops in Georgia in 2008.

After surviving two assassination attempts in Georgia, he had spent recent years in Germany and applied for asylum.

A bus in Volgograd has been ripped apart by a bomb, killing 14 people in the second deadly attack blamed on suicide bombers in the southern Russian city in 24 hours.

The attacks are already raising fears of Islamist attacks on the Winter Olympics.

President Vladimir Putin, who has staked his prestige on February’s Sochi Games and dismissed threats from Chechen and other Islamist militants in the nearby North Caucasus, ordered tighter security nationwide after the morning rush-hour blast.

Investigators said they believed a male suicide bomber set off the blast in the Monday attack, a day after a similar attack killed at least 17 in the main rail station of a city that serves as a gateway to the southern wedge of Russian territory bounded by the Black and Caspian Seas and the Caucasus mountains.

Russia’s foreign ministry condemned the attack, saying it is part of a global “terrorist” campaign and welcomed a declaration of solidarity made on Sunday by the United Nations Security Council.

“For the second day, we are dying. It’s a nightmare,” a woman near the scene told Reuters, her voice trembling as she choked back tears. “What are we supposed to do, just walk now?”

“Identical” shrapnel to that in the rail station indicated that the two bombs were linked, investigators said.

“There was smoke and people were lying in the street,” said Olga, who works nearby. “The driver was thrown a long way. She was alive and moaning … Her hands and clothes were bloody.”

There was no immediate claim of responsibility.

On Sunday, investigators initially described the station bomber as a woman from Dagestan, a hub of Islamist militancy on the Caspian, but they later said the attacker may have been a man. In October, a woman from the North Caucasus blew up and killed seven people on a bus in Volgograd.

It was unclear why the city, which will host soccer matches during the 2018 World Cup, has been hit. However, geography – being close to the restive regions – and its historical significance, may have contributed to its being targeted.

Volgograd has held a place in Russians’ sense of national identity since, when known as Stalingrad, its Soviet defenders held off German invaders to turn the course of World War Two.