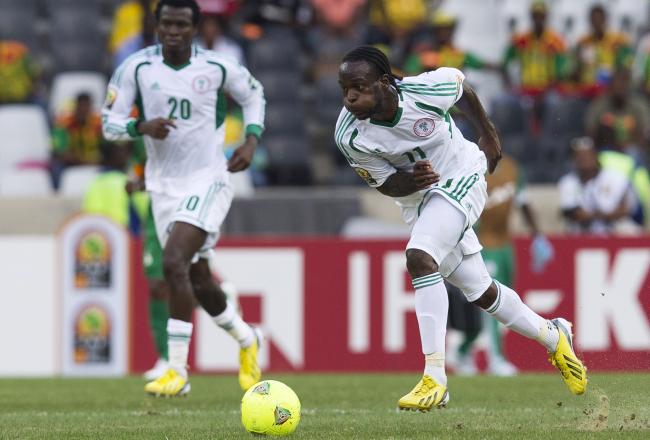 Chelsea striker, Victor Moses fired Nigeria into the quarter-finals of the African Cup of Nations just defending champions Zambia crash out of the tournament.

Two late penalties from Moses put Nigeria into the quarter-finals with a 2-0 win over the Ethiopian side.

Nigeria needed nothing but a win to advance not minding what come out of the game between Burkina Faso and Zambia.

The Ethiopians proved their worth by holding Nigeria down throughout the first half until the 79 when Victor Moses’ burst into the penalty area and a two-footed challenge from Alula Girma allowed for a penalty.

The Chelsea forward man sent the Ethiopian keeper; Sisay Bancha, the wrong way to score the goal and seconds later, the Super Eagles celebration was almost cut short, as a superb move by the Ethiopians through Saladine Said beat the Eagle’s defense.

Victor Moses sealed Nigeria’s victory when a while later he took advantage of a slip in the back to dash forward, starting a three-on-one counterattack that was ended only by Sisay bringing the winger down in the box with another brutal tackle.

The goalkeeper was sent off, and with no substitutions available.

The Ethiopian; midfielder Addis Hintsa, was forced to defend the spot kick.

He fared no better than Sisay, and Moses made it 2-0 with another composed finish.

That score lasted the seven minutes of injury time, leaving Nigeria as Group C runners-up ahead of defending champions Zambia.

Defending champions Zambia crashed out of the tournament after they were held to a barren draw by Burkina Faso who qualified as Group C leaders.

It was as if Fernando Torres read the minds of manager Roberto Di Matteo concerning the solution to finding a suitable replacement for the Spaniard upfront as he braced up  against the Gunners, stunning the London club with what will pass as his fifth goal of the season after 20 minutes into the local derby during the weekend.

Torres said It was important because it gave Chelsea the time to settle into the game and he was very happy for his goal and country man Juan Mata’s goal.

Gunners’ player Gervinho equalised for Arsenal shortly before half-time before another Spaniard Juan Mata scored the winning goal for the Blues in the 53rd minute.

Arsenal has been criticised though for not knowing how to deal with its set pieces while in the game against Chelsea as it became a constant threat to the backline of Arsenal with Koscielny taking the fault for Torres’ ‘all-important’ opener.

According to Fernando Torres “It was a one-against-one against Koscielny and he wasn’t facing the ball, so I could touch the ball before he could put the ball away.”

The 28-year-old was delighted to keep the Blues top of the Premier League with victory.