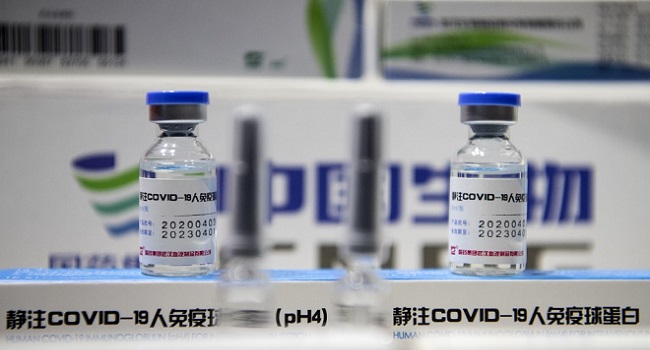 Constantino Chiwenga, wearing a rosary around his neck, received a dose of Sinopharm vaccine at a hospital in the capital Harare and urged citizens to register for the shots.

The 64-year-old was first swabbed to test for coronavirus before taking off his jacket and unbuttoning his shirt to receive the shot in the shoulder.

Chiwenga said the health ministry had done “all scientific processes” to vet the jab.

“My presence here today with some ministry officials (…) is to exhibit the government’s confidence in the Sinopharm vaccine,” said Chiwenga, who doubles as the country’s health minister.

Zimbabwe’s fight against the virus has been blighted by a run-down healthcare system and a struggling economy.

On Monday, it received a shipment of 200,000 doses of the vaccine, whose efficacy against a fast-spreading local variant is unclear.

Frontline healthcare workers and custom officials will be the first receive the shots.

Soman Mudariki, a doctor who had just received his shot, said it was “one of the strategies in the war chest” to fight the virus.

“There should be benefits. There is no harm,” he added.

The vaccination drive has been criticized by human rights lawyers.

They said the authorities had embarked on vaccinating the public while simultaneously conducting clinical trials of the same vaccine.

“Many lives would be put to risk as they may be victims to irreversible side effects,” they said in a protest letter.

Zimbabwe has recorded more than 35,000 infections of which 1,418 have been fatal, figures said to be an undercount due to scant surveillance tools.